Citrobacter sp. produces 3-hexenyl acetate in fruits, which attracts gravid B. dorsalis to lay eggs through ovipositor recognition. This provides a mechanism underlying the effective spread of Citrobacter sp. in the population of B. dorsalis.

As with many fun projects, this one is an important continuation of the previous research. In 2015, Zijun Guo and I worked together in the fruit fly lab at South China Agricultural University, and we were looking for a suitable project for Guo’s PHD thesis. I had worked extensively on Bactrocera dorsalis-an economically important insect that widely spread in tropical and subtropical areas in the world. At the beginning, we found that the resistance of B.dorsalis to trichlorfon could be increased rapidly in a short time. Thus, we thought that this should have no relationship with the genetic resistance. Considering that trichlorfon can enter the gut of B.dorsalis, we hypothesized that the resistance may be related to the detoxification of intestinal bacteria. According to such idea, we isolated and identified the intestinal bacteria and found that a strain of citrobacter (we named it as CF-BD) could significantly improve resistance of B.dorsalis to trichlorfon1. Guo further investigated the transmission mechanism of CF-BD in B.dorsalis. He found that CF-BD could be vertically transmitted to the eggs and has a significant effect on the fecundity of B. dorsalis2. Through such series of work, Guo successfully got his PhD degree in 2018.

After Guo had got his PHD degree, he had joint in another lab in Yunnan Agricultural University. At the same time Muyang He had joint in our lab to earn his PHD thesis. We had started with discussions over a cold brew in one day to decide what to do to earn his PHD degree. Given that our study had shown that CF-BD could be transmitted into fruits by egg-laying and reproduce rapidly in fruits2, we inferred that the reproduced CF-BD may attract females to lay eggs in CF-BD-infected fruits to ensure that CF-BD can be effectively transmitted in the population of B. dorsalis. To verify such hypothesis, He had tested B. dorsalis oviposition preference to CF-BD mixed purees. One day he excitedly told me that B. dorsalis had an oviposition preference for CF-BD. At this point, I'm pretty sure we can go further to study the mechanism that CF-BD attracts B. dorsalis to lay eggs.

Photo 1. Muyang He is testing the oviposition preference of B. dorsalis to CF-BD. Photo credit: Daifeng Cheng.

After that we have proved that the bacteria could produce a volatile substance (3-hexenyl acetate) to attract the flies to lay eggs with a series of behavior experiments. When we thought that this substance could be used to trap and kill the fruit flies, we found that it was almost ineffective. It's pretty depressing! But this doesn’t stop us. We have taken a closer look at the reasons behind. We infer that CF-BD may not be able to attract females at a relatively long distance and the reason why females prefer to lay eggs in purees mixed with CF-BD may be that the females can only use their ovipositors to recognize 3-HA in purees mixed with CF-BD at a close distance.

To verify the hypothesis, we have recorded the egg laying behavior of the female with a camera and we have found that the ovipositor of a female would frequently extend out to receive the chemical information. Such observation confirms the role of ovipositors in regulating oviposition preference. We then further screened the olfactory related genes that are associated with oviposition preference and verified function of the genes with RNAi. Finally Muyang He has also successfully got his PHD degree with such work.

This paper would not have been possible without the previous research accumulation by Zijun Guo. A big thank to him and to the national natural science foundation of China for funding this research. 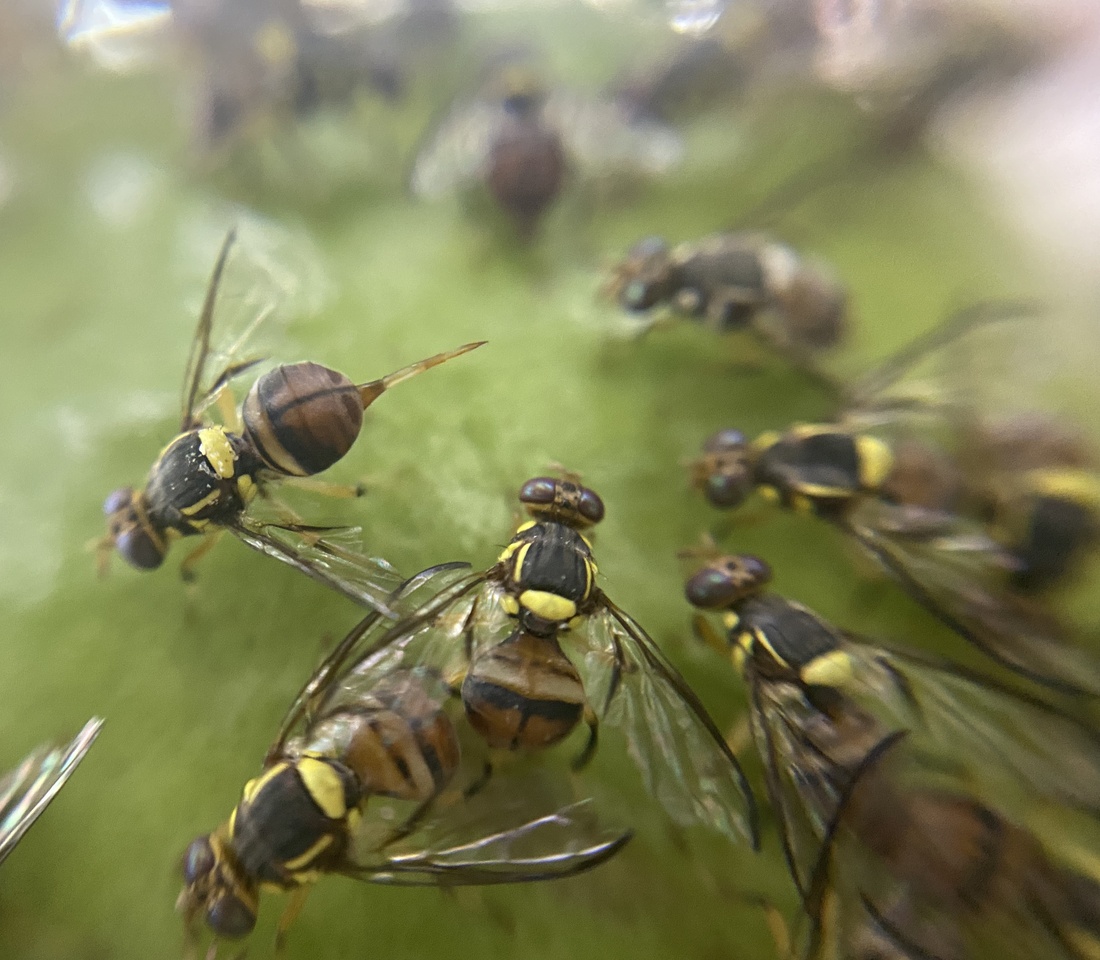