Home sweet home: inside the hives of Nature’s architects

New tools for computational analysis of honeycomb structures provide insight into the building practices of Apis mellifera, the most common honey bee and the primary pollinator of plants worldwide.
Nicolas Lee
Research Assistant, MIT
Follow
Like Liked by Evelina Satkevic and 1 other

Imagine designing and building a multigenerational home using only local, renewable materials. The home must provide food storage and shelter for 80,000 of your family members, who work together day and night to build a seamless structure without any blueprints or master plan. Each dwelling unit is handcrafted to serve its purpose with no material waste. In the course of harvesting the raw materials, it is not environmental destruction but rather propagation that is left in your wake. And when winter comes, it is this home that will ensure the survival of your entire family until spring.

This is the remarkable process by which the western honeybee, Apis mellifera, constructs its home. Without any top-down design plan, worker bees spend several weeks iteratively adding wax and propolis until an intricate wax-comb structure slowly emerges, offering at once shelter, food storage, and brood storage. This phenomenon has led to honey bees being celebrated as an archetype of swarm intelligence and self-organization.

While the stacked rectangular boxes of conventional Langstroth hives constrain domestic honey bees to build wax comb in rigid, parallel sheets of hexagonal cells, comb architecture can become quite complex in freeform environments. Wild hives often contain contoured wax structures with tunnels and holes, each arrayed in intricate patterns that adapt to their environment. Curved sheets of wax comb inherently deviate from the parallel patterns that have been optimized over the course of evolution for the storage of food and brood, representing an exceptional degree of collective decision-making among bees that researchers do not yet fully understand.

In 2020, The Mediated Matter Group initiated a study of how honey bees go about this collective design process by developing an input-output system of co-fabrication. Our research team determined various environmental stimuli that we could introduce (the input) to the hive and observed how they adapted the geometry of wax comb in response (the output). Using a series of designed environments, we altered either the shape of the comb, the forces acting upon it, or its nutrient makeup, in order to reveal scientific insights into the bees’ eusocial behavior.

We began by cultivating four A. mellifera colonies in standard Langstroth environments atop the MIT Media Lab in Cambridge, Massachusetts. Building comb is a calorically intensive process for honey bees, so we took care to ensure the health and nutrition of the colonies. Once the colonies were established and thriving, we provided them with a supplemental diet of pollen and nectar to encourage wax building, and then placed designed environments within their Langstroth hives.

Freeform honeycomb built by honey bees on the roof of the MIT Media Lab in Cambridge, Massachusetts. Neri Oxman and The Mediated Matter Group, 2020

Our first experiments consisted of acrylic boxes, each containing a wax-coated crossbar on which the bees could begin construction. This minimal environment provided a large volume for freeform comb building with minimal constraints. Early researchers of honey bees discovered that if the “target” surface that bees were building comb towards was obstructed by a glass sheet, the bees would curve the constructed wax sheet towards a new target [1]. This behavior implies that the bees working to construct the sheet have a collective intention and that when that intended design can no longer be met, they collaboratively establish a new architecture. We were able to recreate this effect by periodically rotating the acrylic cube environments about a selected axis. Given that a colony generally builds in the direction of gravity, each rotation redirected the comb-building process and induced curvature in the wax comb, resulting in highly curved, complex comb architectures. To analyze these structures, we used X-ray micro-computed tomography (micro-CT) to create volumetric digital reconstructions of the comb.

Until recently, studying the geometric characteristics of honey bee comb has relied on taking measurements by hand. Having accurate 3D models of reconstructed comb architecture in a digital environment allows for increased speed, resolution, and automation of measurements for a wide range of comb features. A number of observations have been recorded related to honeycomb architecture, particularly with respect to the orientation of cells relative to the foundation of the comb and their tilt relative to the direction of gravity. Other observations relate to high-level features, such as the parallel arrangement of comb sheets and their consistent spacing. Computational analysis of the digitally reconstructed comb enables a holistic examination of which hypotheses apply for our complex comb, and can thereby be employed to elucidate the underlying behaviors that govern comb building.

In this approach, we developed a suite of digital algorithms for measuring a wide range of comb features. Some of these features are related to high-level geometry such as curvature measurements that can reveal deviations from typical parallel structures. Others, such as measurements of geodesic distance, show the shortest path that a bee could take to travel between two points on the comb. Since the interior of the hive is dark, bees have to navigate on foot along the surface of the comb and container walls, using chemical and physical signals to find their way.

Geodesic distance describes the shortest path that a bee can take to travel between two points on the comb. Neri Oxman and The Mediated Matter Group, 2020

From these measurements, we created a set of data processing algorithms that allowed us to examine specific features of the comb. One process involved isolating the void space inside the hexagonal cells. This method allows for not only a quick count of the cells in the hive, but also the measurement of cell tilt, which indicates the orientation of the hive environment at the time the cell was built. Other processes map output values from the micro-CT scan data in order to identify materials such as honey and wax by their physical density, examine individual materials in isolation, and illuminate interesting variations in the density of the wax itself. If verified by experimental data, these variations could provide greater insight into the mechanical properties of wax comb and correlated construction behaviors, including whether bees deliberately vary the density of material for structural purposes.

Analysis of physical densities within the comb structure can be used to discriminate between various materials, such as wax and honey. Neri Oxman and The Mediated Matter Group, 2020

Lastly, we used a combination of the geodesic distance measurement and the measured cell tilt in order to estimate the order in which comb features were built. As the hives were constructed from a central crossbar, the orientation of cells can be traced along the geodesic distance in order to extrapolate the point at which each feature was constructed. This operation allows for the reconstructed comb trajectory to be “animated” over time, showing the building process from start to finish. This method holds the potential to reveal aspects of build order that are extremely challenging to observe in real-time without disrupting a hive.

These methods and data sets bring us one step closer toward understanding swarm intelligence in honey bees. Alongside our publication in Communications Biology [2], we have uploaded image stacks for each of the hives that we describe, as well as several sections of wild comb obtained from feral hives in California. A description of how the comb scans can be reconstructed into 3D models is provided in the supplemental information. We hope that as other research communities across disciplines engage with these data and tools in their own pursuits, we will together garner new insights into the social behavior and well-being of one of Earth’s most vital species.

Computational analysis data overlaid as a colored gradient on a photo of a highly curved comb architecture constructed by honey bees. Neri Oxman and The Mediated Matter Group, 2020

Nic Lee is a computational designer whose work combines ecology, materials science, and digital fabrication to create end-to-end pipelines for sustainable architecture and construction. His research centers on the framework of Endless Ecosystems in which all of the matter used for construction systems is produced, and ultimately consumed, by ecosystems. Through his work, he aims to bridge the gap between grown and built environments, bringing the power and sustainability of the natural world to human systems. 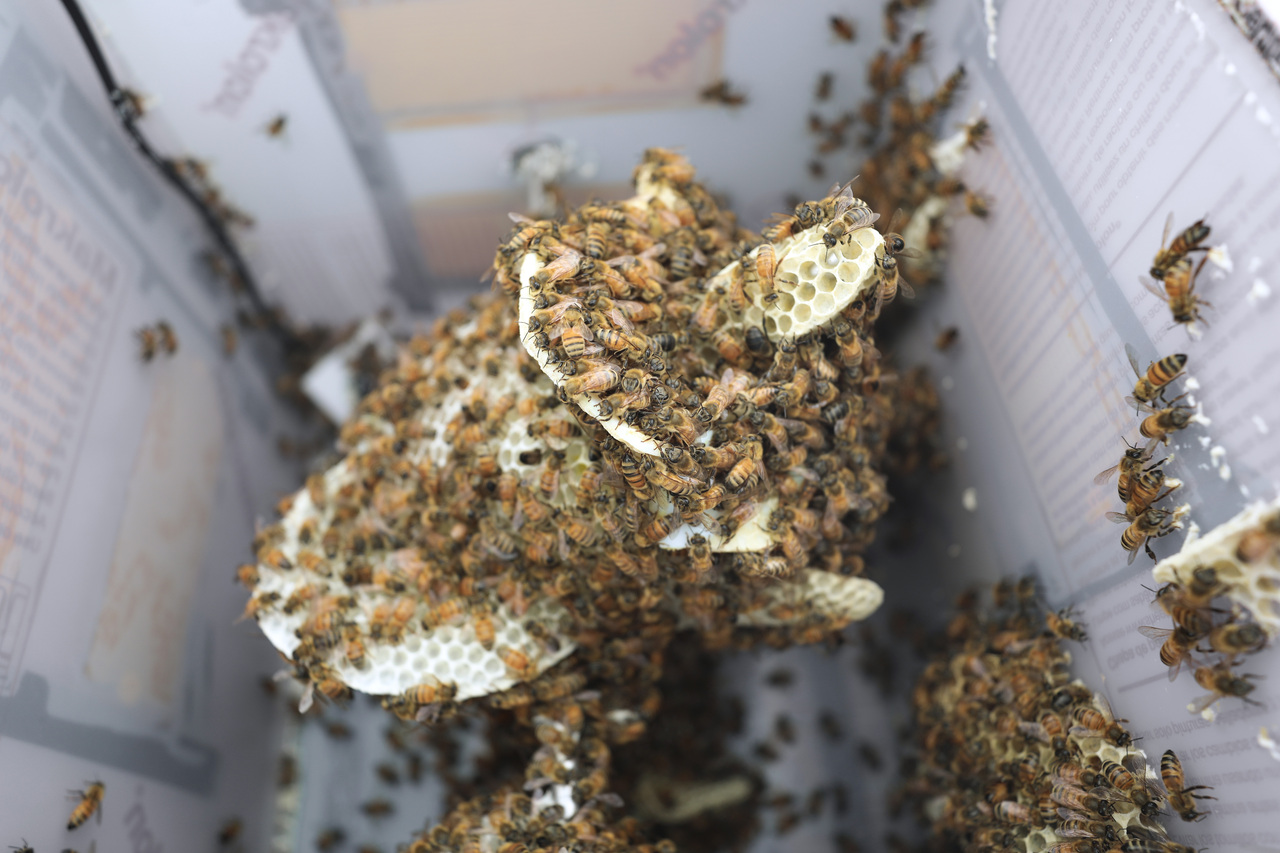 Home sweet home: inside the hives of Nature’s architects

New tools for computational analysis of honeycomb structures provide insight into the building practices of Apis mellifera, the most common honey bee and the primary pollinator of plants worldwide.