The giant rhino was the largest land mammal that ever lived and mainly found in Asia, especially China, Mongolia, Kazakhstan, and Pakistan. How the genus Paraceratherium dispersed across Tibet was long a mystery. A new species P. linxiaense from northwestern China has now shed light on this process.
Tao Deng and Tao Deng
2 contributors
Like Liked by Paolo and 1 other
0

Deng et al. report a new species of giant rhino, Paraceratherium linxiaense, from specimens of the upper Oligocene Jiaozigou Formation in China with an age of 26.5 Ma. Morphological analysis of the completely preserved skull with articulated mandible and atlas reveals a high level of specialization…

The giant rhino has been considered as the largest land mammal that ever lived, up to a maximum body-weight of 20-24 tons. Its body size was suitable for open woodlands under humid or arid climatic conditions. Except rare materials found in the Balkans, Anatolia, and Caucasus, giant rhinos lived mainly in Asia, especially in China, Mongolia, Kazakhstan, and Pakistan. The giant rhino genus Paraceratherium was widely distributed, but many records comprise only fragmentary specimens. For Paraceratherium bugtiense in western Pakistan, isolated from the southwestern corner of the Tibetan Plateau, its origin and relationship to other genera and species have been unclear.

Since the giant rhinos of Kazakhstan and Pakistan were contemporaries in the late Early Oligocene, could they disperse directly between the two regions? Paleogeographically, it is impossible. In the Eocene, Asia was separated from Europe because the Middle East and Western Siberia were still occupied by the sea. The Turgai Strait was still submerged but transitional terrestrial deposits were already developing in the Oligocene. The southwest depression of the Tarim Basin extended eastward to reach the Altyn Tagh Mountain where the Late Eocene to Early Miocene marine deposits are distributed and bear abundant marine foraminifers, ostracods, and bivalves. Marine fish fossils, among which cartilaginous fishes strongly resemble to the fish fauna of the Paris Basin, indicate an east-west sea in this area. South Asia was separated from Kazakhstan by the sea, blocking giant rhinos from direct exchange in this direction.

In a new paper in Communications Biology, we report a completely preserved skull and mandible with the associated atlas, and an axis and two thoracic vertebrae of another individual, representing a new species Paraceratherium linxiaense sp. nov. from the Late Oligocene deposits of the Linxia Basin in Gansu Province, China, with an age of 26.5 Ma, and this basin is located at the northeastern border of the Tibetan Plateau.

Paraceratherium linxiaense possesses features that characterize the genus, such as a giant body size with a basal cranial length of 1148 mm, cone-shaped I1 turning directly downward, and high condyle compared to the height of nuchal surface. It is more derived than other species within this genus in having a smaller upper incisor I1, deeper nasal notch above M2, much higher occipital part and posterior end of zygomatic arch, and larger body size.

Holotype of Paraceratherium linxiaense sp. nov. Skull and mandible share the scale bar, but both anterior and nuchal views have an independent scale bar.

With previous studies as a basis, the systematics of giant rhinos has been partially resolved at the genus level. These works suggest that Juxia diverged from the Forstercooperia-Pappacera clade at about 40 Ma in the Middle Eocene, and its stock evolved into Urtinotherium in the Late Eocene and the derived genus Paraceratherium in the Oligocene. However, the phylogenetic relationships among other derived genera, including the Late Eocene to Early Oligocene Aralotherium and the Late Oligocene Dzungariotherium and Turpanotherium, and among the species within the genus Paraceratherium have not been revealed through cladistics analysis.

Our phylogenetic analysis yields a single most parsimonious tree, which places P. linxiaense as a derived giant rhino, nested within the monophyletic clade of the Oligocene Asian Paraceratherium. This extremely specialized nasal notch is unique to the giant rhino. Within the Paraceratherium clade, our phylogenetic analysis produces a series of progressively more-derived species from P. grangeri, through P. huangheense, P. asiaticum, and P. bugtiense, and terminating in P. lepidum and P. linxiaense. P. linxiaense is at a high level of specialization, similar to P. lepidum, and both are derived from P. bugtiense.

Phylogenetic relationship of giant rhinos, correlated with the geographical and geochronological distribution.

Adaptation of the atlas and axis to the large body and long neck of the giant rhino already characterized P. grangeri and P. bugtiense, and was further developed in P. linxiaense, whose atlas is elongated, indicative of a long neck and higher axis with a nearly horizontal position of its posterior articular face. There correlate to a more flexible neck.

The giant rhino of western Pakistan is from the Oligocene strata, representing a single species, Paraceratherium bugtiense, while the genus distributed across the Mongolian Plateau, northwestern China, and Kazakhstan north to the Tibetan Plateau is highly diversified. Our phylogenetic analysis indicates that all six species of Paraceratherium are sister to Aralotherium and form a monophyletic clade in which P. grangeri is the most primitive, succeeded by P. huangheense and P. asiaticum. In the Early Oligocene, P. asiaticum dispersed westward to Kazakhstan, and its descendant lineage expanded to South Asia as P. bugtiense. In the Late Oligocene, Paraceratherium returned northward cross the Tibetan area to produce P. lepidium to the west in Kazakhstan and P. linxiaense to the east in the Linxia Basin. We note the Early Oligocene aridity in Central Asia at a time when South Asia was relatively moist, with a mosaic of forested and open landscapes. Late Oligocene tropical conditions allowed the giant rhino to return northward to Central Asia, implying that the Tibetan region was still not uplifted as a high-elevation plateau.

Ecological reconstruction of giant rhinos and their accompanying fauna in the Linxia Basin during the Oligocene.

During the Oligocene, obviously, dispersal for the giant rhino from the Mongolian Plateau to South Asia could disperse freely along the eastern coast of the Tethys Ocean and perhaps through the hinterland of Tibet. The topographical possibility that the giant rhino crossed the Tibetan area to reach the Indian-Pakistani subcontinent in the Oligocene can be supported by other evidence. The fish and plant fossils discovered from the Oligocene lacustrine deposits in the central Tibetan Plateau display tropical characteristics, indicating an elevation of lower than 2000 m for this area. Through to the Late Oligocene, the evolution and migration from P. bugtiense to P. linxiaense and P. lepidum demonstrate that the “Tibetan Plateau” was not yet a barrier to exchange of the largest land mammal. 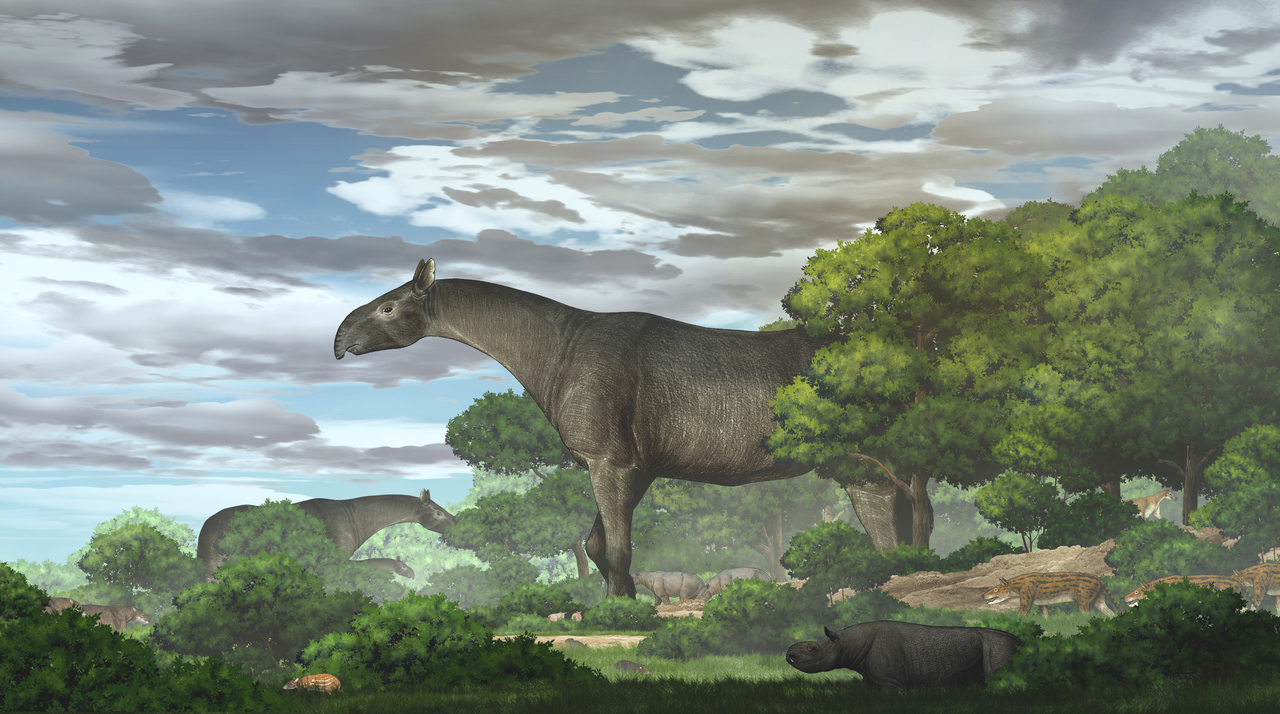 The giant rhino was the largest land mammal that ever lived and mainly found in Asia, especially China, Mongolia, Kazakhstan, and Pakistan. How the genus Paraceratherium dispersed across Tibet was long a mystery. A new species P. linxiaense from northwestern China has now shed light on this process.