Samantha Brown
Junior Group Leader of Archaeo- and Palaeoproteomics, University of Tübingen
Follow
Like Liked by Evelina Satkevic and 1 other
0

The earliest Denisovans and their cultural adaptation - Nature Ecology & Evolution

Identifying Neanderthal and Denisovan bone fragments using collagen peptide mass fingerprinting and mitochondrial DNA analysis at Denisova Cave, the authors are able to date the earliest secure Denisovan presence at the cave to c. 200 ka. The stratigraphic association with lithics and faunal remains…

For those of us who investigate Pleistocene hominin populations, the big challenge has always been finding their physical remains. Despite the long history of study and interest in Neanderthals, for instance, only a few hundred of their fossils have ever been discovered. Most of those fossils are teeth, whose structure makes them physically resistant to all kinds of environmental damage over many hundreds of thousands of years. Bone on the other hand is not so resistant to this kind of damage. Heat, humidity, water, and acidic soils will destroy bone over archaeological timescales, not to mention all of the carnivores that delight in chewing them up into tiny fragments. Our research team has been focused on sites that have evidence for Denisovans, a sister population to Neanderthals. There are only a handful of fossils known for this group as they are thought to have lived in regions where bone does not survive particularly well. So rather than looking for bones that have morphological signs that they belong to humans, we have been using a palaeoproteomic technique that allows us to study the collagen of bone and taxonomically identify it. In this paper, we report the findings of our work at Denisova Cave.

Over 250,000 bone fragments have been excavated over the decades of archaeological investigation at the cave but of those, more than 95% can’t be identified morphologically.

Denisova Cave is potentially one of the most exciting places in the world to study how ancient hominins lived during the Pleistocene. This site, located in the lowlands of the Altai Mountains in Russian Siberia, is unique in having evidence for three different hominin populations – Neanderthals, Denisovans, and modern humans. Stone tools are found throughout the cave alongside exceptional artefacts like bone needles and pendants. The problem with studying the physical remains of hominins at this site is not that bones are rarely found but that they suffer an incredibly high degree of fragmentation. Over 250,000 bone fragments have been excavated over the decades of archaeological investigation at the cave but of those, more than 95% can’t be identified morphologically. Over years of environmental pressures and carnivore activity, the bones have become so fragmented they no longer bear any of the diagnostic features typically used to taxonomically identify them. We knew, based on other fossils located at the site, that there must be human remains hidden away in these giant assemblages. Now we just had to find them.

We screen these large assemblages of fragmented bones using a method called ZooMS (Zooarchaeology by Mass Spectrometry) which identifies small differences in the amino acid sequences of collagen to make taxonomic identifications. It’s a comparably fast and cost-efficient method of identifying the species of bones which can’t be identified on the basis of morphology.

While ZooMS analysis of collagen is quite quick, preparing the bones for analysis requires a huge team effort. Each bone fragment is put into its own bag and given a unique number, recordings are made for each bone, and then they are drilled. Between drilling each fragment, the tools and workstation are cleaned to minimise contamination. Cleaning the tools and the workspace often takes longer than drilling the 20mg of bone needed for analysis and this process is repeated thousands of times. After weeks of preparing all of these bones it takes only three days to extract and measure the collagen of about 500 samples at a time. Then the data analysis begins.

When you identify 1477 in a sample, you know you’ve found something special.

Data analysis for ZooMS is typically done manually. We open each of the spectrum produced by the mass spectrometer and then sort through the identified masses in the collagen, matching them to a reference library. Many people are often surprised that those of us who work in this field have memorised the peptide masses for mammals - but when you’ve manually taxonomically identified more than 3,000 samples (in triplicate), you very quickly begin to remember them.

The moment you find a hominin bone is a pretty incredible one. After hours, days, weeks of sorting through the spectra of cows, deer, and horses you realise you’re studying the collagen of something very different. Hominins have a marker at 1477 that stands out in comparison to all other mammals at Denisova Cave. When you identify 1477 in a sample, you know you’ve found something special. In 3,791 bones I got to see 1477 five times.

Despite the many benefits of using a technique like ZooMS, it can’t always make species-specific identifications. This is particularly true for humans, whose collagen looks identical to all of our closest ancestors when studied in this way. So once “hominins” are identified using ZooMS the bones go on to DNA analysis to assign them to a population. This incredible work was led by my co-author Diyendo Massilani at the Max Planck Institute in Leipzig. They were able to extract mitochondrial DNA from four of the five hominin fossils, revealing we had found one new Neanderthal individual and three new Denisovans. The Denisovans originate from the oldest stratigraphic context for the cave, making them about 200,000 years old and the oldest known fossils for this population identified so far. It also confirms that the Denisovans were the first hominin population to inhabit their namesake cave. These individuals give us the opportunity to further our understanding of who this mysterious group of hominins were and you can read all about this in our paper.

The Denisovans originate from the oldest stratigraphic context for the cave, making them about 200,000 years old and the oldest known fossils for this population identified so far.

When I think about this project as a whole, I am struck by how unremarkable these fossils appear. When you look at these bones there is nothing about their morphology to suggest that they might belong to very early Denisovan individuals. These bone fragments are indistinguishable from any other fragmented bone excavated from the site and as a result, they are so easily overlooked.

Just think about all the other important fossils out there that must be sitting in storage rooms and collections, just waiting to be identified.

All of this research was made possible because of the generosity of the Russian Academy of Sciences and the European Research Council. Thank you to them and all of our collaborators.

You can find out more about this project here: https://www.finderc.org 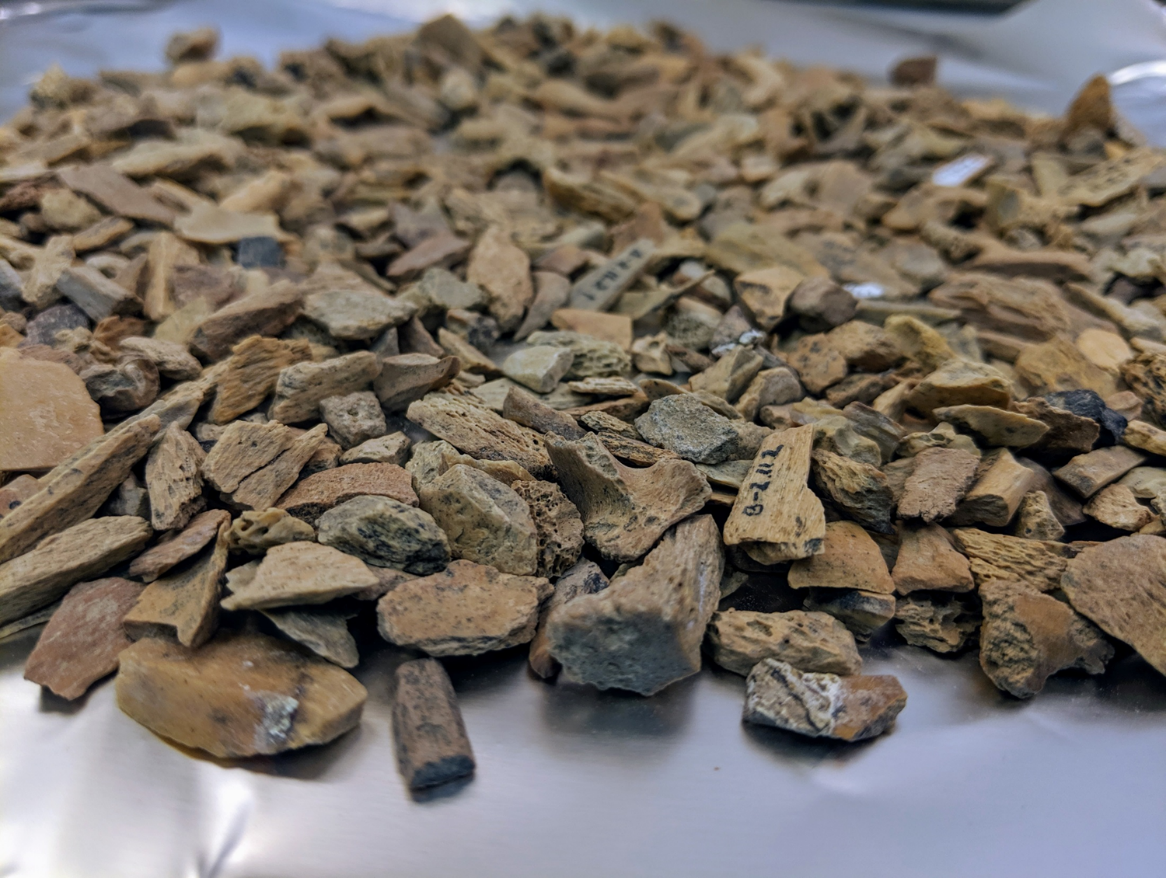