How to increase knowledge about aquatic mammals in the Amazon and in the largest Delta in the Americas?

Working in the vastness of the Amazon is already a challenge for any researcher, can you imagine studying aquatic mammals in this region? Until 2005 little was known about the diversity of this group and what were the real threats to the species on the IUCN list classified as Near threatened, including the Guiana dolphin Sotalia guianensis, Vulnerable, the Amazonian manatee Trichechus inunguis and Endangered, the Amazon river dolphin Inia geoffrensis.

The vast mangrove forests impose enormous challenges in the search for stranded aquatic mammals. The solution often found was to walk the coastline for many hours, monitoring beaches piece by piece in search of stranded dolphin carcasses. Often our team was called in to assist strandings of cetaceans in such remote and inhospitable places, where we had to coordinate the collection of samples with the macro tides of the Amazon coast, which flood extensive coastal areas and could surprise us in the middle of the work.

Our study also comprised the vast Parnaíba Delta, the only one in the Americas that flows directly into the Atlantic Ocean through five large bays. The labyrinth formed by more than 80 islands is located between two states in the northeast of Brazil, Piauí and Maranhão, in a semi-arid region that comprises a mesotidal coast with large areas of mangrove forests. The monitoring in this area is not easy, it can only be reached by small boats and access to the beaches is done on foot.

But all this effort was rewarded, we helped to set up one of the largest osteological collections of aquatic mammals in Brazil. The Collection of Mammals of the Museu Paraense Emílio Goeldi has today more than 750 specimens collected and registered. All this material can be used by the scientific community, generating research in different areas of knowledge, such as our work published in Scientific Reports.

After a long period of collection samples we finally started discussions about my doctoral thesis. At that time, my advisor Dr Tommaso Giarrizzo was already involved in projects using stable isotopes analysis, so we followed that path.

Our first ecological questions were to investigate the habitat use and trophic relationships among freshwater and marine aquatic mammal species, evaluate isotopic niche partitioning among the most representative species Guiana dolphin Sotalia guianensis, Amazon and Araguaian river dolphins Inia geoffrensis and I. araguaiaensis, and the Amazonian manatee Trichechus inunguis, within the Amazon estuarine complex and characterize differences in isotopic niches between different populations of Guiana dolphin.

We highlight the main findings of this research: a) Isotopic niches were highly distinct, with no overlap among the assessed species inhabiting the Amazon Estuarine areas; b) The Amazon river dolphin and Amazonian manatee occupied significantly larger isotopic niche space, indicating high habitat plasticity; c) The Guiana dolphin inhabited two coastal regions indicating an ecological distinction, dolphins from Amazon estuarine areas occupy a broader isotopic niche area, indicating higher trophic plasticity; d) Among marine delphinids, the carbon isotopic composition in offshore species mirrored that of nearshore species, contradicting the pattern of decreasing δ13C values characteristic of many areas around the world including areas in Southeastern and Southern Brazil; e) No isotopic niche overlap was observed between S. guianensis and Inia spp.; and results found from Guiana dolphin indicated an ecological distinction between populations.

Our findings provide novel data on the stable isotope composition for these threatened cetaceans and sirenian species in this large section of Brazilian coast.

I would like to greatly thank everyone who helped me over the years in the collection, processing the samples, the analyzes, the review of texts and support in my research.

Also, to thank my academic mentor and my co-author in this publication, Salvatore Siciliano, for his friendship, support and patience during all the years of research.

Our manuscript titled, "Resource partitioning among stranded aquatic mammals from Amazon and Northeastern coast of Brazil revealed through Carbon and Nitrogen Stable Isotopes" is available in: 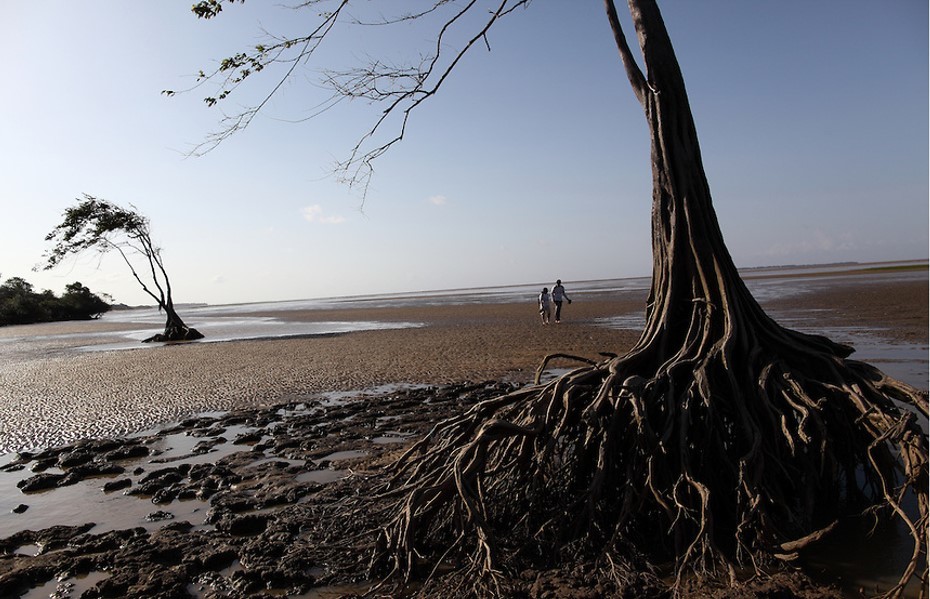 How to increase knowledge about aquatic mammals in the Amazon and in the largest Delta in the Americas?