Museum biologists and computer engineers use miniaturized smart light sensors to investigate the differential survival of a Pacific Island land snail.
Diarmaid Ó Foighil
Professor of Ecology & Evolutionary Biology; Curator of Mollusks, University of Michigan
Follow
Like Liked by Patrick Kennedy and 2 others

Bick et al. describe a novel way of testing their hypothesis that an invasive predatory snail fails to drive to extinction a native, threatened non-predatory snail because both have different tolerance ranges for exposure to sunlight. They test it by developing a miniature light sensor, small enough…

I was amazed and left momentarily speechless. My retiring University of Michigan Museum of Zoology colleague, John B. ("Jack") Burch, had just opened his lab freezer door to reveal an extraordinary vista: a fabled, largely extinct, Pacific Island land snail radiation in lyophilized form. Half a lifetime earlier, in 1970, Jack had comprehensively collected and preserved endemic partulid tree snail populations on Tahiti and nearby Moorea (Society Islands, French Polynesia). This was shortly before they fell victim to an infamous biological control program: the deliberate introduction of an alien predator, the carnivorous land snail Euglandina rosea. Once I picked my jaw off the floor, I resolved to work with Jack on them.

Society Island partulids have long been the topic of influential population-level evolutionary studies, starting with H.E. Crampton in 1916. This scientific legacy facilitated the emergency establishment of a dedicated captive breeding program, one of the first such involving invertebrates, overseen by the Zoological Society of London.  It currently involves 15 institutions in multiple countries.

Using Jack’s museum specimens, we found that a representative subsample of Moorean and Tahitian phylogenetic diversity still survives among extant captive and remnant wild populations. This was a rare bit of good news in the otherwise grim topic of Pacific Island land snail conservation. We were curious about the remnant wild survivors: what aspect(s) of their biology has enabled them to differentially survive almost 50 years of predation by Euglandina rosea? The survival of one Tahitian valley lineage, composed of two nominal species (Partula hyalina and P. clara), was of particular interest. While initially quite rare, typically representing <10% of the original Tahitian Partula spp. valley populations, this lineage is now the sole survivor in 37 of the 38 Tahitian valleys known to harbor extant congeners. As part of her Ph.D. thesis, Cindy Bick established that this differential survival was correlated with higher reproductive performance, whether measured as the clutch sizes of historical wild populations, or as the reproductive rates of captive populations.  However, she noted that this lineages’ heightened reproduction alone did not explain why the white-shelled P. hyalina is faring much better than its close relative, the darker-shelled P. clara. Cindy developed a species-specific solar refuge hypothesis to explain this discrepancy.

Behaviorally, most land snails resemble vampires in that they actively hide from direct sunlight, leaving cover at night or during overcast conditions.  They do so because their low motility and water-permeable skin render them vulnerable to lethal solar radiation-induced thermal stress and desiccation. Land snails that survive best in open environments often have light-colored high albedo shells that ameliorate these stresses by reflecting most of the incident light in the visible spectrum.  The distinctly white shelled P. hyalina has been documented to occur in forest edges, in addition to in dense forest (the normal partulid habitat), and the solar refuge hypothesis states that these forest edge habitats are avoided by the predator due to its lower light intensity tolerance.  It predicts that, in Tahitian valleys, surviving P. hyalina will be restricted to forest edges where they will routinely experience solar radiation levels that exceed the predator’s light tolerance levels.

To test the hypothesis, we needed to accurately characterize the solar ecologies of both snail species in the field. Light sensors have been used in vertebrate studies for years, but these were much too large for our need to track free-moving E. rosea.  Most fortunately, we established a collaboration with David Blaauw and In Hee Lee, two engineering colleagues with expertise in miniaturized smart sensor development, to develop bespoke snail-sized solar sensors.  This work was initially supported by a University of Michigan inter-disciplinary research fund and it involved modification of the Michigan Micro Mote (M3), a sensor platform that has been reported as the world’s smallest computer.

The M3 platform consists of a family of chips that can be integrated together through die-stacking in various ways, allowing its functionality to be customized. A particular challenge involved in recording the snails’ solar ecologies was the need to maintain continuous light monitoring without rapidly depleting the sensor’s tiny battery. This was achieved by repurposing the M3 platform’s energy harvesting circuits to achieve light-dose quantification with near-zero power overhead, enabling us to design a 2.2×4.8×2.4 mm3 smart solar sensor, the world’s smallest to-date.

After a long period of painstaking light sensor development, manufacture, calibration, and pilot recordings using local Ann Arbor land snails, we were finally ready to test the solar refuge hypothesis. Cindy and In Hee flew to Tahiti with their precious cargo of 50 bespoke sensors to join our local field collaborator Trevor Coote, a member of the Partulid Global Species Management Programme.  They quickly got to work and over a period of two weeks studied multiple populations of both species in Tahitian valleys by attaching light sensors directly to foraging E. rosea and by placing them adjacent to quiescent P. hyalina (partulids typically aestivate in an elevated position on vegetation during the day and our permit did not allow us to attach sensors directly to these endemic snails).

The quality of the field data we recovered was most gratifying: high-resolution real time measurements of the light ecologies of both species in Tahitian valleys. These data corroborated the solar refuge hypothesis, indicating that P. hyalina does benefit from a species-specific respite from predation and that proactive maintenance of forest edge habitats may ensure the indefinite survival of this endemic species on Tahiti.  They also demonstrated the utility of miniaturized smart sensors in invertebrate conservation and ecological studies. The resulting paper has now been published in Communications Biology, and can be found here. See also an accompanying University of Michigan video summary.

Postscript. In the past four months, we have tragically lost two esteemed colleagues who made this study possible.  Jack Burch, whose museum samples inspired this entire line of research (see above for details), passed away in early June at the age of 92. We additionally lost our co-author Trevor Coote in February to COVID-19. We gratefully acknowledge Trevor's extraordinary dedication, over many years, to Society Island partulid conservation. See below (left) a photo of him (foreground) at work on Moorea in August 2019, supervising the historic reintroduction of Partula tohiveana specimens (right) raised in captivity in European zoos. This species is a Moorean single-island endemic and captive populations were established in 1982, just prior to the species’ extirpation in the wild by Euglandina rosea.

Evelina Satkevic
about 1 year ago

Thank you for sharing this great story behind the research!

Diarmaid Ó Foighil
about 1 year ago 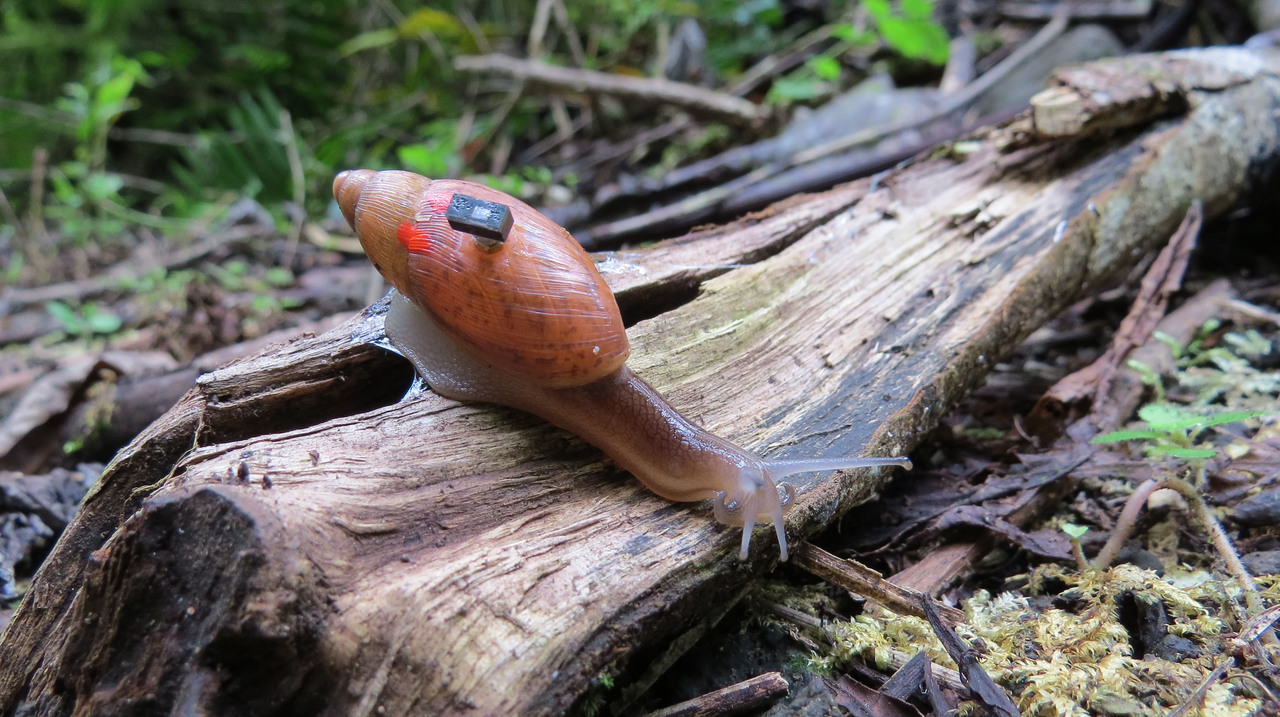