How to win against competitors and influence your neighbors

When the world is microbe-eat-microbe – how can microbial cooperation survive the test of time?
Hilary Monaco, Kevin Liu & Yanyan Chen
3 contributors
Like Liked by Sorrel Bunting and 1 other
0

Bacteria often live in densely packed, spatially-structured communities; however, much of our understanding of their behavior stems from studies in liquid culture. Here, Monaco et al. show how spatial structure and quorum sensing modulate a cooperative behavior in colonies of Pseudomonas aeruginosa.

The bacterial world is a highly competitive place. It’s a constant struggle to find food. Bacteria are armed to the teeth with arsenals of antimicrobial weaponry [1]. At any moment, the surrounding environment can be perturbed with antibiotics, deadly chemicals, or other extreme conditions. Cooperative behaviors are ways for groups of microbes to survive together in these harsh conditions. However, cooperative behaviors rely on bacteria to invest resources into products that would help the group rather than investing them into their own replication.

When the world is microbe-eat-microbe – how can microbial cooperation survive the test of time?

First, cooperation often co-exists with communication. Cooperative behaviors are largely social in nature, meaning they require communication signals to be exchanged to fully unlock the phenotype. Bacterial communication signals, termed quorum signals, are constantly being secreted and sensed by bacteria. Changes in the concentrations of these signals can give bacterial gene expression a sense of timing. It can reflect the environmental balance of bacterial density and the diffusivity of the environment, giving bacteria sense of when it may be most advantageous to cooperate.

Additionally, spatial structure is also thought to be important to the preservation of cooperative behaviors. It has been shown through simulations that the heterogeneity of spatially-structured systems can allow for the benefits of costly cooperative traits to be localized near the participating cooperators rather than prospective cheaters [2].

Most of the work that examines cooperative behaviors in microbes has been performed in liquid culture. However, bacteria frequently live in spatially-structured habitats. The tools that exist to examine microbial gene expression in spatial structure are rapidly developing, but currently they either only allow for cross-sectional measurement (a single timepoint), or only allow for the prolonged observation of a few cells at a time.

In our study – recently published in Nature Communications (here) [4] – we developed a new imaging infrastructure that allowed us to observe microbial gene expression timeseries in a traditional agar plate. We used this technology to investigate a microbial cooperative behavior in spatial structure.

We focused on the opportunistic human pathogen Pseudomonas aeruginosa and its ability to produce rhamnolipids, a highly conserved cooperative trait. We tracked gene expression of the rate-limiting enzyme in rhamnolipid generation, RhlA, through the observation of the promoter region of its operon, rhlAB.

Rhamnolipids themselves are virulence factors, and when produced in massive amounts they allow P. aeruginosa to cooperatively swarm. Swarming allows the cells to move centimeters from their starting location in a matter of hours in beautiful dendritic patterns (Figure 1). Interestingly, despite the large amount of resources required to secret enough rhamnolipids to swarm, this behavior in P. aeruginosa appears to be un-cheatable. In any swarming competition, when these cooperators are pitted against a rhamnolipid non-cooperator, they never seem to lose.

The demands of tracking microbial gene expression both through time and space required us to build a new fluorescent imaging system (Figure 2). LED light was used to illuminate the samples. Images were collected by a fluorescent camera through a filter wheel. The hardware infrastructure was constructed inside an incubator to allow for cellular observation with temperature control. We wrote custom software to automate image collection and to process the image timeseries, extracting information about the cells with pixel-level resolution. The system generated image timeseries that we analyzed for cell growth and gene expression patterns.

We conducted our experiments using a fluorescently labeled strain of P. aeruginosa. We then used an extension of the classic Colony Forming Unit (CFU) assay to observe how colony growth and gene expression (rhlAB) changed with time and spatial configuration. We did this by seeding the plates with CFUs, and then tracking the growth and gene expression in colonies that emerged from these CFUs (cCFUs) over time.

Coming into this study, two things had been repeatably shown in liquid culture. First, P. aeruginosa only expresses small amounts of rhlAB at high growth rate and expresses large amounts when growth rate is low. Second, adding extra quorum signals to the cell culture doesn’t strongly influence rhlAB expression. But – in spatial-structure – neither of these held true.

In spatial structure, the expression of rhlAB in cCFUs scaled positively with growth rate and the cells were capable of responding to exogenously provided quorum signals from centimeters away within 24 hours. This unprecedented length scale of interbacterial communication therefore led us to wonder: could the behavior of a cCFU be explained by the behavior of other cCFUs nearby?

To answer this question, we turned to ecological modeling. We found that the patchy growth patterns of vegetation in arid landscapes provided a lens to understand the spatial-temporal impact of cCFU arrangement in spatially-structured systems. Shrubs in arid environments that are clustered closely together can preserve and share water and nutrients amongst their local root networks, thus promoting growth at short distances. However, when shrubs are grown further away, their root systems compete for water and nutrients and therefore impede growth at long distances (Figure 3a). This distance-dependent framework, termed a spatial kernel, is commonly used to describe how individuals can affect each other based on their spatial configuration. However, unlike arid ecosystems, we had no idea what shape to expect in a spatial kernel describing our cCFU system. So, we let the data guide us.

We collected data with wildtype cCFUs randomly seeded on agar plates. Then, we discretized the images, calculating the amount of biomass proceeding outward from every colony in concentric annuli (Figure 3b). For each timepoint, we performed a model selection procedure to determine the cumulative set of concentric annuli that best predicted colony behavior. This completely data-driven approach revealed an awe-inspiring result: as time passed, colony behavior was best explained with information from colonies farther and farther away.

Swarms behave like cCFUs and resist cheating even with social perturbation

Having observed associations between rhlAB activity in cCFUs that were centimeters apart, we needed to take this information back to probe the sociobiology of P. aeruginosa swarms. Did swarming cells act like cells in liquid or our spatially fixed cCFUs? Did they also respond to social perturbation? If so, would this leave them open to non-producing cheaters?

To the first question, we found that the relationship between growth rate and rhlAB activation recapitulated the spatially-linked expression pattern that we observed in cCFUs, rather than previous liquid culture observations. We also saw a few differences when we compared swarms provided with exogenous quorum signals with swarms that were not. However, when we competed our wildtype cells with rhamnolipid non-producers in the presence of exogenous quorum signals, we didn’t see any competitive disadvantage to our cooperating cells. So even when we disrupted the social environment, our cooperating P. aeruginosa remained the reigning champ of swarming competition.

We show in our paper that bacterial gene expression patterns in spatially-structured systems can be radically different than gene expression in liquid culture. Further, we show that these differences are important for the stability of cooperative behaviors in nature. But our story might just be the tip of the iceberg. We suspect that there is much more to learn about the dynamics of microbial social behaviors in spatially-structured systems. 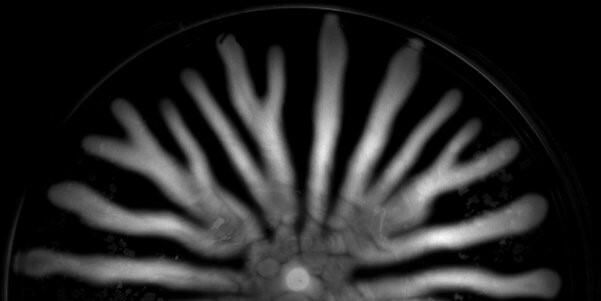 How to win against competitors and influence your neighbors

When the world is microbe-eat-microbe – how can microbial cooperation survive the test of time?