Banded mongooses act to reduce pup inequality from behind a ‘veil of ignorance’ over kinship.
Harry Marshall and Michael Cant
2 contributors
Like Liked by Michael Cant
0

Obscuring knowledge of personal gains from individuals can theoretically maintain fairness in a cooperative group. Experiments show that wild, cooperatively breeding banded mongooses uncertain of kinship allocate postnatal care in a way that reduces inequality among offspring, suggesting a classic i…

We all intuitively know our childhoods are important, and that a deprived childhood can result in poor physical and mental health in adulthood. The same link between early- and later-life is seen across the natural world. This project was born out of asking how animal societies might have evolved to cope with or reduce these early-life inequalities.

Our society often strives to reduce inequality through the fair allocation of resources. One idea is that fairness is only possible when the individuals deciding how to distribute resources don’t know how they will personally benefit. This has been dubbed the ‘veil of ignorance’ in moral philosophy1. It’s the reason why it used to common practice for US presidents to place their assets into blind trusts, so that they can make decisions for the good of the country, rather than themselves. Recently biologists have realised this idea might apply much more widely as a way to achieve fairness in societies of genes, or cells, or individual organisms2.

The remarkable biology of our study species, the banded mongoose, provided the ideal opportunity to test this idea. This species lives in social groups of around 20 or 30 individuals in which all females usually give birth together in the same den on the same night. As a consequence females cannot tell which pups in the communal litter are their own offspring. That is, there is a ‘veil of ignorance’ over parentage. Once the pups emerge from the den at around one month old they form one-to-one relationships with adult carers, known as escorts3. This escort-pup relationship is not based on kinship and is another remarkable feature of banded mongoose society.

To test the veil of ignorance theory we developed project that combined evolutionary modelling with a field experiment manipulating pre-natal inequality in our wild mongoose system. For the theoretical modelling part of the project we worked with Rufus Johnstone at the University of Cambridge. He developed a game theory model involving two mother-offspring pairs where the relative quality of the pairs varied. Unsurprisingly, when the mothers knew whose offspring was whose they each cared for their own no matter how much they differed in quality or condition. However, when he assumed there was a veil of ignorance so that mothers didn’t know which offspring was which the model made some really interesting predictions. If one mother was in much better condition than the other, both agreed that the better quality mother should care for the poorer quality offspring.

Why did the model predict this? The key is the ignorance over kinship to the offspring. Since the poorer quality offspring might belong to either mother they both have an interest in ensuring it survives, despite its initial disadvantage. When the mothers were very different in quality, the optimal arrangement for both was for the best quality mother to care for the neediest offspring. From behind a veil of ignorance, good quality mothers should focus on poorer quality offspring, levelling up any initial disadvantages in the communal litter.

How do these predictions compare with what we observe in the field? The fact that banded mongoose groups contain multiple mothers who give birth on the same night meant we could run a field experiment in which we fed half the pregnant females in each group, leaving the other half as matched controls.  The result was a breeding attempt in which maternal and pup inequality was amplified. We could then observe how this increased inequality affected the care pups received and the consequences of this for their growth and survival, all from behind the veil of ignorance over pup parentage.

The Banded Mongoose Research Project is based in Queen Elizabeth National Park, Uganda has been running for 26 years. Much of its success is down to the work of the Ugandan field team (pictured) who are incredibly skilled in collecting detailed data and running field experiments. They recognise the animals by sight and have a wealth of information on each individual’s personality and life history. The team also regularly visits each mongoose group (often daily) meaning that many groups are well-habituated to our presence, allowing us to target specific individuals in our field experiment. For this field experiment we age-matched pregnant females and fed one female in each pair 50 grams of egg a day until they gave birth. This represents about a third of a female’s daily energy needs and came in the form of a very boring omelette (no salt, pepper or fillings, and some very boring dinners for us as we experimented with egg preparation methods at the start of the study).

We ran this experiment for three years which resulted in 100 pups (exactly!) being born to fed or unfed mothers. A neat side effect of the mongooses’ ignorance over parentage is that this we too have no idea of which pup belongs to which female, meaning this experiment was naturally blinded. We only found out which pups belonged to which mother once the DNA lab analyses were complete long after we’d completed collecting behavioural and growth data from the pups.

Our data showed a striking match to the pattern expected by our veil of ignorance model. There was much greater inequality in pup size in the litters we had manipulated, showing that the experiment had worked. Fascinatingly, fed mothers targeted their care at the smaller ‘control’ pups from unfed mothers, not their own young – just as predicted from Rufus’ model based on the veil of ignorance. The care these pups received was also better quality care because they were fed more often by their escort. As a result, although these pups started off smaller, they grew more quickly, reached the same body size by age three months, and survived just as well to one year old (sexual maturity).

The take home message here is that fairness can evolve in societies even though individuals are striving towards their own selfish ends – as long as they do so from behind a veil of ignorance. Such veils of ignorance have evolved elsewhere in the natural world2. In human society we can and do build these veils ourselves to ensure that decision makers work for the common good. In nature as in politics, ignorance might not be bliss, but at least it can be fair. 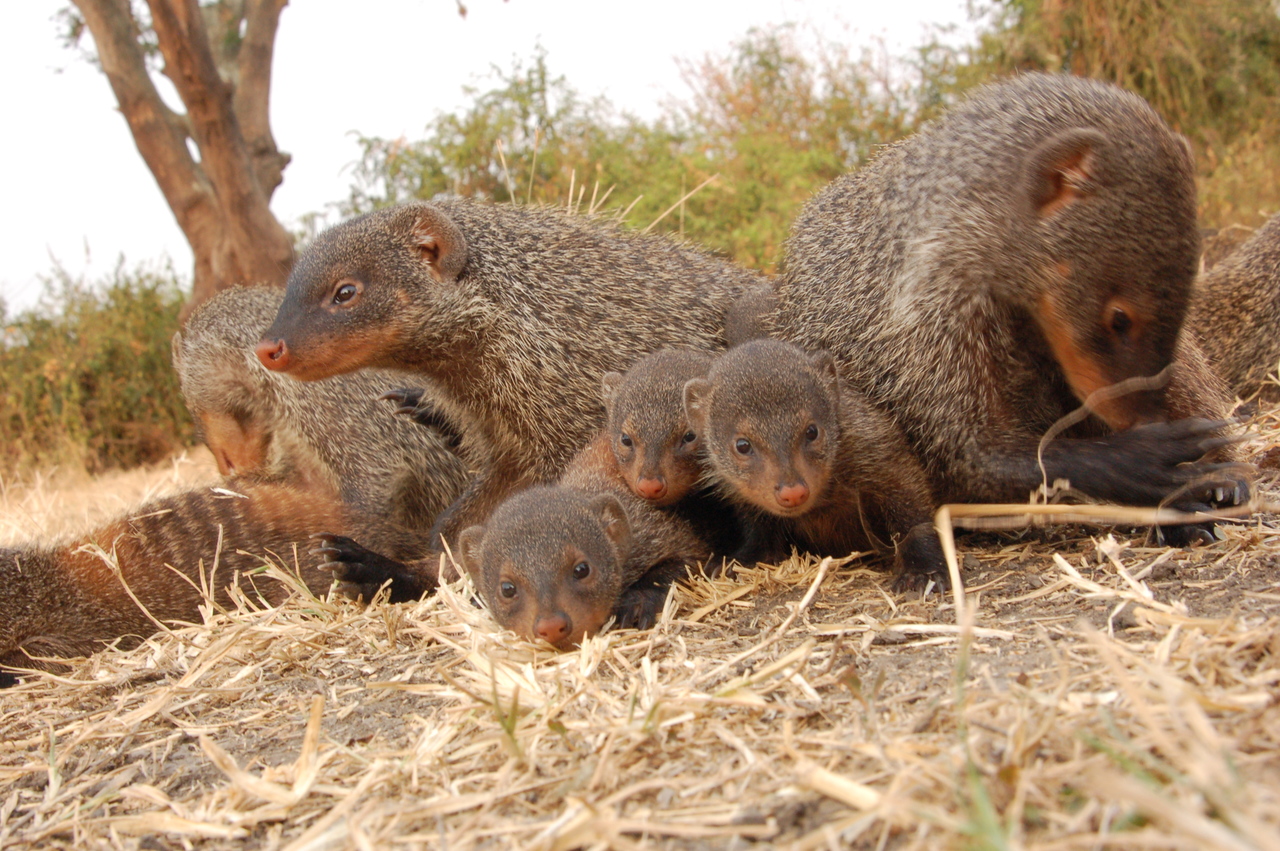 Banded mongooses act to reduce pup inequality from behind a ‘veil of ignorance’ over kinship.