Photosynthesis is the prime force driving the underlying success of one of the most spectacular structures on Earth: the coral reefs1. Unfortunately, the unusual increase in ocean warming in recent decades causes coral bleaching; i.e., the paling of corals observed upon losing their photosymbiotic algal partners. Since corals are solar-powered animals, this symbiotic breakdown (“bleaching”) is regarded as a major threat to the future existence of shallow-water reefs2. Consequently, increased interest has been focused on the long-understudied ‘twilight-zone’ of coral reefs, namely, mesophotic coral ecosystems (MCEs; 30-150m depth).

Generally, corals are considered one of the most efficient organisms at using, capturing, and converting light to generate energy (Figure 1). Amazingly, they also manage to grow and thrive in the distinct low-light conditions typifying the mesophotic depths. Due to the extreme low-light conditions, mesophotic corals exhibit uniquely specialized strategies to harvest the incoming light, and often exhibit different features from corals that are found in shallow reefs, such as a greater chlorophyll-a content and/or a higher density of photosynthetic symbiotic cells3. But, probably the most notable difference is in the colony morphology. Mesophotic corals exhibit a more flattened growth form, which is assumed to maximize the amount of light, and thus energy that can be captured.

Corals produce a great diversity of morphological structures on both the colony and corallite (i.e., the polyp skeleton) scales. Each morphology uniquely interacts with light, providing distinct light environments for the photosynthesizing dinoflagellates living within the coral’s tissues. Although coral morphology is one of the most influential traits defining how corals interact with their environment and with their endosymbiotic microalgae, our knowledge of the role that the skeletal architecture plays in light harvesting is insufficient, particularly on the small corallite scale. Our goal in this project was to explore the role of the corallite-scale morphology in light harvesting in two contrasting light environments.

First, we assessed the variation in the skeletal features of the common depth-generalist Stylophora pistillata (Figure 2) from shallow (4-5m) and mesophotic (45-50m) depths of the northern Gulf of Eilat/Aqaba. Using closed-circuit rebreathers (Figure 3), we sampled 30 colonies from both depths and scanned them using a high-resolution micro-computed tomography (i.e., µCT), which is based on 3D x-ray scans. This non-invasive method enabled us to extract accurate and detailed information on the small-scale skeletal structures of the corals. We found significant structural differences on the skeletal surface between shallow and mesophotic corals. Shallow coral samples revealed larger and deeper corallites, while the distance between the corallites was larger for mesophotic colonies (Figure 2).

Second, we were interested in further examining how these changes in the small-scale 3D morphology influence the coral's ability to capture light and photosynthesize at both depths. To examine this, we applied a novel method by which to determine the functional significance of small-scale morphological traits with respect to the coral's internal irradiance distribution. We have integrated our morphometric results with our recently obtained photosynthetic and optical data3, and developed 3D light propagation models (using Monte Carlo simulations). Our simulation results suggest that small-scale morphological traits influence in-hospite light distribution and absorption, consequently affecting coral photosynthesis. The change in the length scale of morphological traits found within each of the two depth groups was shown to benefit the photosynthetic output with respect to their natural surrounding light regime. Our light models indicate that in total, the mesophotic architecture provides a greater ability to use solar energy under limited-light conditions compared to the shallow architecture, specifically by increasing the surface area to volume ratio on the corallite scale.

The results from our study contribute to our understanding of the photoadaptation of mesophotic corals and shed light on the importance of coral morphology for photosynthesis under extreme light regimes. The 3D light models developed in this study can be used in determining the photic boundaries of any particular coral species based on their morphology and optical properties. Furthermore, these light models can be used to improve coral predictive models to environmental changes. 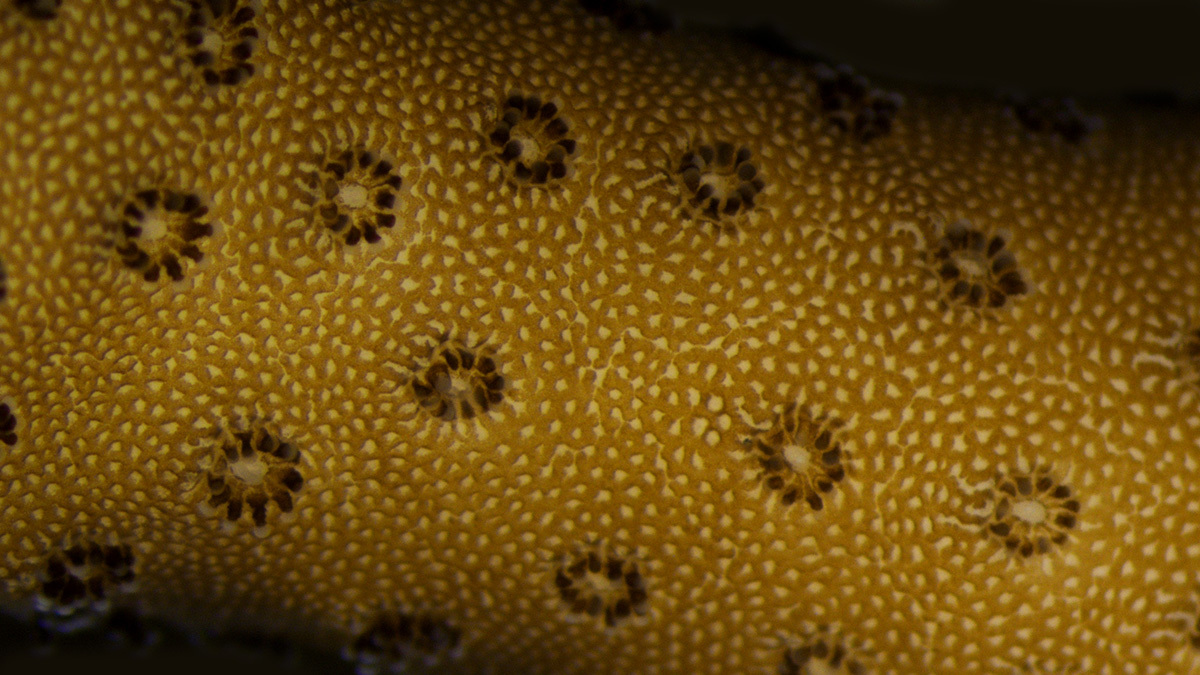