Mongolia, the land of the horse, reveals genes for the ‘Sport of Kings’

Horse racing, the ‘Sport of Kings’, is among the oldest known sports. The quest for success in racing traverses diverse cultures and geographies and racing is popular all around the world. What genes shape and distinguish racing breeds from other horse breeds is a long-standing question.
Emmeline Hill
Professor, University College Dublin
Follow
Like Liked by Gao Jianguo and 3 others
0

A genome-wide analysis in galloping racehorse breeds identifies protein-altering genetic variants in a core set of genes that appear to determine attributes for racing, including muscle, neurobiological, and metabolic advantages.

Ulaanbaatar was a place on the globe I wondered at as a child, an exotic, seemingly unreachable place. Once I learned that it was in the heart of the Asian steppe region where horses were thought to have been domesticated 1, it took on a new temptation to reach, not for its soft vowels and sharp consonants, but for its access to the horses that bind all of us in the world that share a love for them. There are 3.5 million people in Mongolia, but there are more horses than people. This is the land of the horse, say the Mongolians. It is the axis on which my world spins.

Horses on the Mongolian steppe, Khentii

Ulaanbaatar, developed as a Soviet-era city, now has 1.5 million people, a population that has doubled in size in the last 15 years. In downtown Ulaanbaatar there are smart hotels and good restaurants catering for local professionals and businesspeople, as well as tourists and the small expat community. On the whole Mongolians, particularly the women, are very well educated, and there is a profusion of world class cultural activities including opera, ballet, folk music and dance, and art galleries. Otherwise, the old Soviet apartment blocks can appear grey and inhospitable, although inside they are often nicely decorated and updated. Surrounding the city, the ‘ger’ district (areas populated originally with traditional Mongolian tents and latterly with small houses) extends for miles, colorfully filling the hillsides like a child’s painting. In winter, the city is cloaked in a cloud of smog generated from the domestic coal fires that warm the population when temperatures drop as low as -40C 2.

Professor David Warburton is a world leader in child health at Children’s Hospital Los Angeles and the Keck School of Medicine, University of Southern California (USC) 3. He has been visiting Ulaanbaatar for more than 20 years, sharing knowledge and fostering training and research collaborations with the Mongolian National University of Medical Sciences, the National Center for Maternal and Child Health, and other hospitals to improve mothers' and children’s health, as well as to understand better and combat the ill effects of seasonal severe air pollution 4-6. During a research visit in 2017, along with a group of medical scientists from USC and Dr Carol Readhead from Caltech, he attended the summer horse races at the Mongolian Naadam Festival where they were hosted by local medical scientist Dr Jargalsaikhan Bardach 6. At Naadam, horses race across the steppe at speed over distances of 16 km or more.

“When we met with one of the major horse breeders and owners, I wondered what in their genetic makeup gave these Mongolian horses such endurance and stamina.

“Carol and I thought that by studying the genetics of his bloodstock we might be able to find out what made these particular Mongolian racing horses faster and more competitive than the rest of the more than four million other horses that occupy the vast geographical space of Mongolia and Inner Mongolia, China. That evening, after a quick google search, Carol found and contacted Emmeline. The project was off to the races.” recalled Professor Warburton.

Since the discovery of the ‘Speed Gene’ in 2009 7,8, my research groups at Plusvital Ltd and University College Dublin, Ireland, have generated genetic data for thousands of Thoroughbreds 9 and horses from other breeds 10,11. We teamed up with the Californian scientists to organize a sampling mission to Mongolia to try to answer their questions.

In the summer of 2018, we were warmly welcomed by the Ajnai Sharga Horse Racing Team, which has bred champion racehorses for decades on their farm in Khentii province. We were a team of both young and more established enthusiasts, including Carol, my 13-year-old son Henry, and research student Lucy Allen, from the Royal Agricultural University, Cirencester, UK.

In two vehicles with local drivers, we set off in convoy on the road to Khentii, an eight- hour journey due east of Ulaanbaatar. Perched in the back seat was Hulsen, Ajnai Sharga’s seven-year-old apprentice jockey who was returning from a visit to his home province 500 km west of Ulaanbaatar. Hulsen shared his bag of sweets with us as he watched DVDs streamed to the back seat of the jeep. His little strong legs were already taking a bowed shape; he had been riding from four years old, having his first race at five years old, and in 2017 at six years old he finished 11th in a 300-horse field. He weighed just 25 kg and at 30 kg his racing career would end.

We stopped at one point to marvel at a gigantic statue of Chinggis Khan on horseback, facing east towards Khentii, his birthplace. The statue, standing 40 feet high, has been credited by the Guinness Book of Records to be the largest equestrian monument in the world. It has a rightful place given Chinggis Khan’s influence in spreading the genes of horses from this region to all corners of the globe. The statue is sited on the place where, it is told, he found a golden riding whip, which identified him as the future Khan, universal emperor of the Mongolian steppe.

We were welcomed to the farm by the trainer and his mother who produced warm milk, donuts and milk curd cookies. Our hosts had gone to enormous lengths to ensure we were comfortable, sharing space in their gers that were adorned with photographs of champion racehorses and a traditional morin khuur (horsehead fiddle).

As the sun rose the next morning, in the deep quiet we could hear the hushed sounds of voices and horses being moved into the corrals. Generally, the horses are rarely handled and roam freely in small bands, yet during the next two days, with the help of the highly skilled herdsmen, we collected hair samples from 100 of the 500 horses on the farm. The tail hairs were processed and, considering local custom, the residue hairs were incinerated and carefully preserved in an urn.

Collecting samples from the Mongolian horses

By combining the genetic data that we obtained from the Mongolian horses with Thoroughbred racehorses and racing Arabian horses we compared their genomes to those of non-racing breeds to identify genomic regions under selection for racing. To identify genes that were functionally relevant to racing, we integrated the results from the population genomics analyses with gene expression data from Thoroughbred skeletal muscle. Since 2006 we have collected muscle biopsy samples from large cohorts of Thoroughbred horses at various exercise time points and stages of race training to understand the functional effects of exercise on muscle 12-15. By integrating the population genomics outputs with the gene expression signatures for exercise and training 12 we were able to identify a critical set of genes for racing. Whole genome sequencing of a set of Asian horses identified protein-coding variants in these genes, which clearly differentiated racing horses from other horses and were functionally relevant to exercise.

Dr Haige Han, an equine geneticist 10,16 at the Inner Mongolia Agricultural University, China, and first author on the research paper said, “Testing hundreds of horses from racing and non-racing breeds identified seven essential genes for racing. These genes have roles in muscle, metabolism, and neurobiological functions, and are central to racing ability among horse breeds.”

Commenting on the work, co-author Professor David MacHugh, Professor of Animal Functional Genomics at University College Dublin said, “Although racing is a multifactorial trait, with management and training having a considerable influence on the success of a racehorse, our study provides good evidence for major-effect genes shaping the racing trait in horse populations.”

Selective breeding has resulted in certain horse breeds specialized for racing. Now, application of these research findings can help to accelerate breed development by more precisely choosing genetically suitable horses for racing through genome-enabled breeding.  Some of the genes may also influence athletic performance in humans and other athletic animal species.

“Although man does not cause variability and cannot even prevent it, he can select, preserve, and accumulate the variations given to him by the hand of nature in any way which he chooses; and thus he can certainly produce a great result.” Charles Darwin, Animals and Plants Under Domestication

Emmeline Hill
Professor, University College Dublin
Follow
I am an equine geneticist with a focus on Thoroughbred racehorse genetics. My scientific interests however are more broadly in animal population and conservation genomics, and functional genomics. In 2010 I co-founded Equinome, the first equine genetics testing company to test for a gene associated with racing performance, which we called the 'Speed Gene'. I am Chief Science Officer for Plusvital, an Irish equine science company that acquired Equinome in 2015. 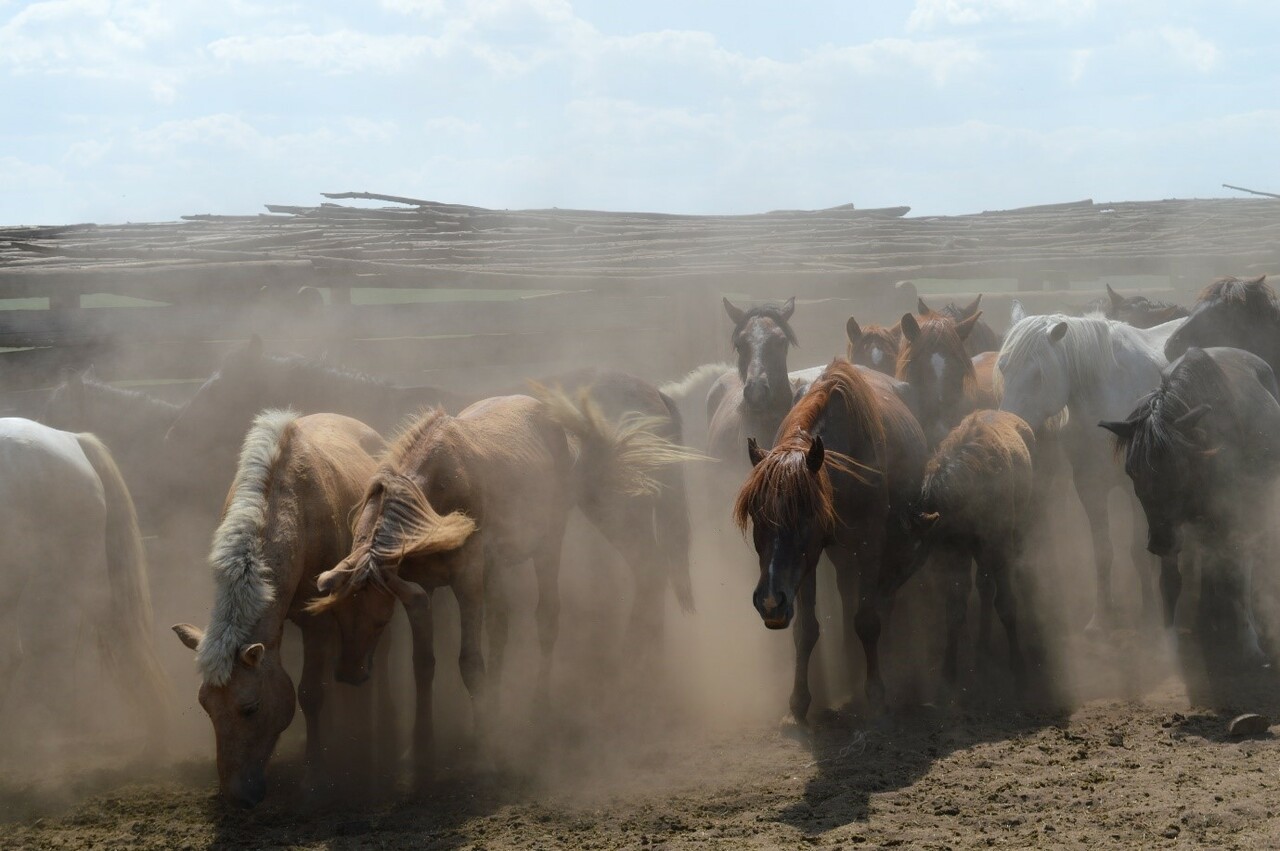 Mongolia, the land of the horse, reveals genes for the ‘Sport of Kings’

Horse racing, the ‘Sport of Kings’, is among the oldest known sports. The quest for success in racing traverses diverse cultures and geographies and racing is popular all around the world. What genes shape and distinguish racing breeds from other horse breeds is a long-standing question.