A claim that the bacterial flagellum evolved from the injectisome is no longer sustainable
Richard Buggs
Professor, Queen Mary University of London
Follow
Like Liked by Jiaxing Tan_谭
0

The bacterial flagellar motor is a supramolecular protein machine that drives rotation of the flagellum for motility, which is essential for bacterial…

Since I wrote a blog post on the obsolescence of Dawkins’ old claim that all gene trees have the same topology, a paper has been published in Cell that contradicts another of his claims.

In his book 2006 book The God Delusion, Richard Dawkins gave prominent place to a particular scenario for the evolution of bacterial flagellar motors. Flagellar motors are highly complex structures containing many protein parts. Dawkins claimed that it was clear that the flagellar motor “commandeered” components from the injectisome in its evolution. Injectisomes are simpler structures used by some living bacteria to inject proteins into eukaryotic cells. Referring to the injectisome as the type three secretory system (TTSS), Dawkins wrote (p. 132):

Thus, Dawkins viewed the injectisome as an evolutionary precursor for the flagellar motor.

In the Cell paper published just a few day ago, a group of Chinese researchers published an atomic-level structure of the bacterial flagellar motor and compared it to the injectisome. These structures are shown in the figure below (kindly provided by Yonqun Zhu).

Although the flagellum has been proposed to be the evolutionary ancestor of T3SSs, the structure of the flagellar motor is significantly different from that of the T3SS basal body. The rod in the basal body of the Salmonella T3SS consists of two proteins, PrgJ and PrgI, and adopts a relatively simple helical structure. In contrast to the tight contacts of the T3SS rod with the secretin channel and the inner membrane ring, the flagellar rod has few contacts with the LP ring to facilitate its high-speed rotation and torque transmission. In addition, unlike the C24-symmetric inner membrane ring assembled by PrgH and PrgK in the Salmonella T3SS, the MS ring of the flagellar motor is composed of 34 FliF subunits with mixed internal symmetries. Therefore, the flagellar motor has evolved special structural elements for bacterial motility.

In other words, even parts of the two structures that seem to correspond to each other are very different. Thus, parts of the injectisome could not simply be “commandeered” for the flagellar motor.

You may notice another implicit contradiction of Dawkins’ scenario in the quotation above. The only ancestor-descendent scenario that the authors of the Cell paper consider to be worth mentioning is one where the injectisome is descended from the flagellum. Not the other way round.

This is because there is existing evidence that the injectisomes found in present day bacteria are more recent in their origin than flagellar motors are. This evidence is summarised by a 2015 paper in Philosophical Transactions of the Royal Society B. For example, flagellar motors have a far wider phylogenetic distribution than injectisomes, and tend to be encoded within the main bacterial chromosomes, whereas injectisomes tend to be on horizontally transferred DNA segments. More phylogenetic evidence for the flagella first can be found in this PLoS Genetics paper.

Therefore, Richard Dawkins’ scenario for the evolution of the flagella motor has not stood the test of time. Despite its obvious attractions, this scenario is no longer suitable for use by science educators and communicators.

So what should we say if someone asks us what evolutionary biology has to say about the origin of the flagellar motor? The good news is that a large new project has just been funded at Imperial College London to investigate the origins of the flagellum. But for now, the most accurate answer to give is to be found in the press release for that project: “For evolutionary biologists, the flagellum is an enduring mystery.” 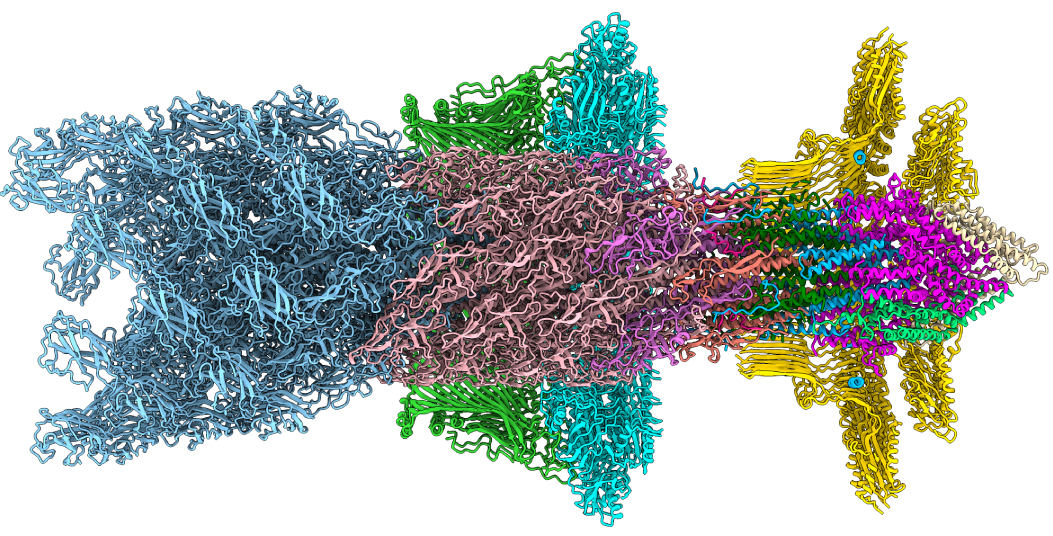