The Gobi Desert has been one of the treasure houses for paleontologists with hundreds species of dinosaurs, mammals, and other organisms being discovered. A recently discovered species of horned dinosaur provides new information of the early history of this group.
Congyu Yu
Phd student, American Museum of Natural History
Follow
Like Liked by Caitlin Karniski
0

"Be prepared for the field......seriously." Said Prof. Mark Norell, the curator of vertebrate paleontology in the American Museum of Natural History who leads the field expedition in the Gobi Desert for over 30 years. "......ok", as I packed another can of beans to be shipped directly to Ulaanbaatar, Mongolia. The Gobi Desert Expedition is probably one of the harshest field trips in the world without almost everything seems to be necessary in modern world.

Fossils from the Gobi Desert must have been discovered much earlier than the history of paleontology, as local myths often describe monsters such as Griffin that may be eventually derived from the fossils of Protoceratops, a medium-sized horned dinosaur. It was formally named after the initial expedition by the American Museum of Natural History in 1920s, as well as many other famous dinosaurs such as the Velociraptor. Protoceratops was probably one of the most abundant dinosaur species in that ecosystem. During each field expedition in the Gobi Desert, crews easily found fragmentary bones, isolated teeth, sometimes several bones articulated to each other, and occasionally the whole skeleton.

Mark and I were discussing the discovered horned dinosaurs from the Gobi Desert before our expedition. For the last a hundred years, there are a few horned dinosaur (Ceratopsia) species discovered from the Gobi Desert, about half of which belong to a specialized group called Psittacosaur and only few are identified to be members of the Neoceratopsia. Apparently, there is a gap between the small, ordinary-looking early ceratopsian species in the Late Jurassic and those giant armored species appeared in Late Cretaceous. An unexpected discovery in a rainy day may give us clue on the those changes in the evolutionary history of horned dinosaurs.

The recently discovered horned dinosaur was named as Beg tse. The name is derived from the deity of war in Buddism, and the rugose structure on its facial area of this new species corresponds the armor of this deity. During the evolution of horned dinosaurs, they gradually acquired densely packed teeth, the dental battery, and extraordinarily projected horns and frills. At the same time, they lost the premaxillary teeth and transited from bipedal to quadrupedal. To understand those changes, the essential taxa are those with transitional characters. Phylogenetic analysis indicates Beg tse is sister to all other known neoceratopsian dinosaurs. The character changes in its teeth and jaw joint all showed intermediate states between very early ceratopsians and later appeared taxa such as Protoceratops.

"It is not the best year, but definitely not the worst." Mark summarized our field trip when approaching the end of it. The camp fire, breezing wind, and shimmering star light made everything not as bad as I expected in the beginning. Now after working from home for more than 6 months, I am wondering when shall we go back to the Gobi Desert and see what treasure will be discovered, maybe another dinosaur is there to be unearthed. 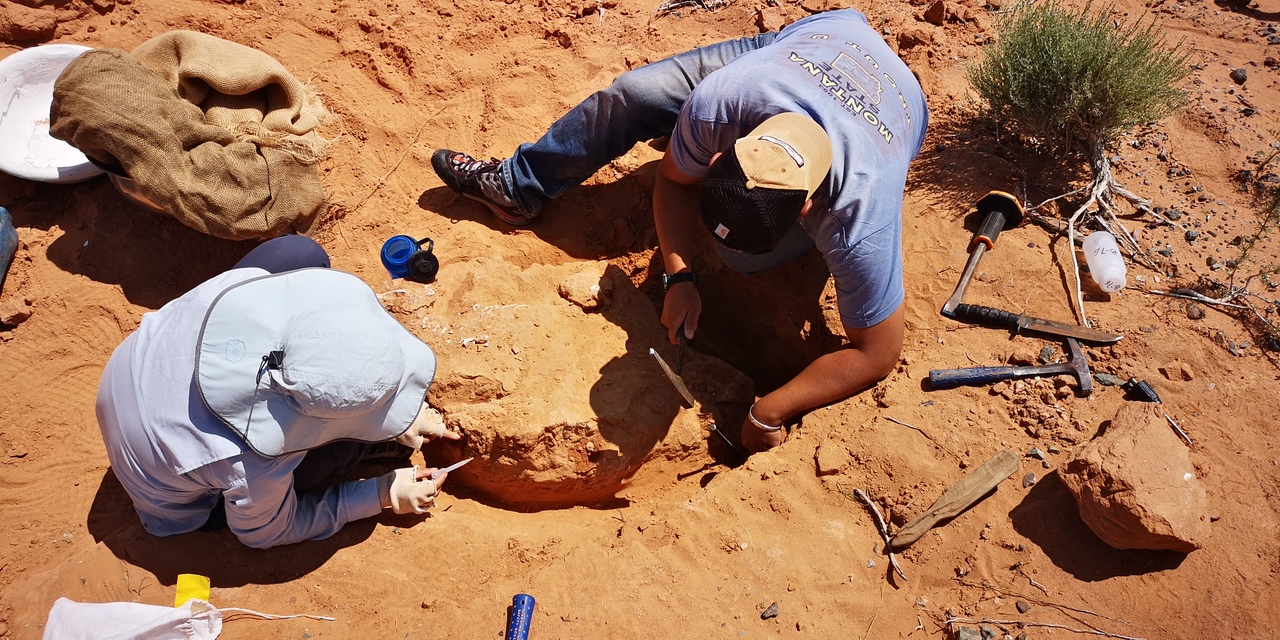 The Gobi Desert has been one of the treasure houses for paleontologists with hundreds species of dinosaurs, mammals, and other organisms being discovered. A recently discovered species of horned dinosaur provides new information of the early history of this group.