Isoetes is a little studied group of aquatic lycophytes that utilize Crassulacean Acid Metabolism (CAM) while submerged. A new genome assembly for Isoetes taiwanensis helps shed light on the convergent origins of CAM in vascular plants.

What do you know about Isoetes? Next to nothing? You’re not alone. Though it is found in a wide variety of freshwater and terrestrial habitats across the globe, this diminutive plant is easily overlooked and rarely studied. While it may resemble a small clump of grass, Isoetes is actually a lycophyte in the order Isoetales, separated from grasses and other flowering plants by over 300 million years of evolution. While modern Isoetes are typically quite small, they’re thought to be the closest living relatives of enormous tree-like organisms that towered over the Carboniferous landscape 240 million years ago. Despite their unassuming appearance, modern Isoetes, also known as quillworts, are a fascinating group of plants with a great deal to teach us about plant evolution.

Perhaps one of the most interesting things about many species of Isoetes is their utilization of Crassulacean Acid Metabolism (CAM) to fix carbon while submerged. CAM is a modification of the ancestral C3 photosynthetic pathway wherein CO2 is taken up and stored as malate over night to be used to conduct photosynthesis during the day. It is commonly associated with plants in arid environments, where it reduces water loss by allowing them to close their stomata during the hottest portion of the day. In Isoetes as well as a handful of other aquatic plants, CAM appears to have evolved as an adaptation to the limited availability of CO2 in the aquatic environment.

CAM has evolved independently dozens of times and can be found in every major group of vascular plants. It is a highly complex syndrome requiring extensive regulatory rewiring of a wide range of genes and pathways. As such, it provides us with an excellent example of convergent evolution of a complex trait. Convergence is vital to the study of evolution. The repeated evolution of complex traits in a range of genomic and environmental backgrounds allows researchers to disentangle coincidence from causative factors that drive evolutionary change. To that end, our group has produced a high-quality genome assembly and paired it with RNA-seq time course data for the aquatic quillwort Isoetes taiwanensis. Thus, by investigating CAM in a unique phylogenetic and environmental context, we attempt to shed light on the underlying mechanisms that have driven its evolution throughout the vascular plants.

While CAM in Isoetes is broadly similar to that in terrestrial angiosperms, our analysis of genomic and transcriptomic data found some important discrepancies. Notably, I. taiwanensis demonstrated differences in the timing of its expression of key circadian clock genes whose expression is highly conserved in other vascular plants. Likewise, multiple copies of core circadian clock genes, GIGANTEA (GI) and PSEUDO-RESPONSE REGULATOR 1 (PRR1) were expressed in I. taiwanensis despite being strictly maintained as single copy genes in other plants. Additionally, substantial differences in the enrichment of cis-regulatory elements associated with circadian gene expression suggest that circadian control of CAM-associated genes has diverged considerably from what has been observed in terrestrial CAM species.

Perhaps our most surprising finding involves a photosynthetic enzyme known as phosphoenolpyruvate carboxylase (PEPC) that is central to CAM. PEPC catalyzes the first carboxylation reaction, fixing CO2 for storage during the night. In plants, PEPC genes are placed into two distinct categories, “plant-type” and “bacterial-type” PEPC, the latter being named for its similarity to PEPC found in proteobacteria. In all CAM plants studied to date, it is plant-type PEPC that is found in high levels in green tissue where it aids in nocturnal carbon fixation. On the other hand, “bacterial-type” PEPC is typically expressed at low levels and/or found in non-photosynthetic tissues. I. taiwanensis is highly unusual in that it expresses both types of PEPC in leaf tissue with the “bacterial-type” being expressed at a much higher level than the plant-type PEPC. This finding is possibly more significant in light of studies showing that bacterial- and plant-type PEPC interact to form a complex that is less sensitive to inhibition by malate, a primary product of nocturnal carbon fixation by CAM plants.

The assembly and analysis of the I. taiwanensis genome bridges a substantial gap in our knowledge of plant genomics and represents a vital first step to a wide range of studies in vascular plant evolution. While our exciting results awaits more detailed protein and metabolic analyses they serve as tantalizing evidence that the evolution of CAM may have followed a very different path in Isoetes than it has in terrestrial angiosperms. Furthermore, it is among these differences that we hope to find the common forces that have driven the repeated evolution of this complex trait across the plant tree of life.

Want to learn more about CAM (plus a lot of other interesting stuff) in Isoetes? Check out my interview with Matt Candeias on the In Defense of Plants podcast:

Isoetes on In Defense of Plants! 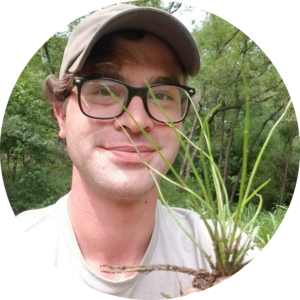