We studied the effects of Toxoplasma gondii on wolf behaviour in Yellowstone National Park, Wyoming, USA. We found that seropositive wolves were more likely to make high-risk decisions such as dispersing and becoming a pack leader, both factors critical to individual fitness and wolf vital rates.
Connor Meyer
PhD Student, University of Montana
Follow
Like Liked by Evelina Satkevic
0

Wolf behavioural, spatial, and serological data over 26 years show that wolf territory overlap with areas of high cougar density is a significant predictor of T. gondii infection. Further, infection increases the likelihood that wolves make high-risk decisions such as dispersing and becoming a pack…

I was sitting in a packed lecture hall, one of sixty students in Dr. Aaron Wirsing's freshman level "Wildlife in the Modern World" course, when Dr. Wirsing booming voice reverberated throughout the auditorium: "For all the focus there is on how big carnivores impact prey behavior, we may be looking in the wrong place, perhaps it's the small things driving wildlife behavior and decision making". We know that no single factor drives animal decision-making, but Dr. Wirsing was referencing the then-recent research on the protozoan parasite Toxoplasma gondii. At the time T. gondii made headlines in popular media for being the "crazy cat lady parasite," where humans exposed to the parasite exhibited increased attraction to felid urine, compared to uninfected humans. Without knowing it, this lecture set the stage for our recent publication, almost 10 years later.

Toxoplasma gondii is a protozoan parasite capable of infecting any warm-blooded species on the planet. It's multi-host life cycle relies on its definitive host (a felid) ingesting infected muscle tissue of prey animals. In felids, once ingested T. gondii sexually reproduces in the gut before infectious oocysts are deposited in the environment along with feces. These oocysts can survive for up to and over a year, depending on the environment. In non-felid mammals, once either infected oocysts or infected muscle tissue of prey animals are ingested, infection crosses the gut and moves to the newly infected hosts muscle tissue, waiting to be ingested, and to the brain, where it interacts with hormone production. In observational human and experimental rodent studies, T. gondii exposure correlates to increased testosterone (Lim et al. 2013, Zouei et al. 2018) and dopamine production (Stibbs 1985, McConkey et al. 2013). This hormone alteration can manifest as behavioral changes including increased aggression (Arnott et al. 1990, Coccaro et al. 2016) and increased risky decision-making including increased hyperactive movement, failure to avoid olfactory predator cues (i.e., seeking out instead of avoiding felid urine), and decreased neophobia (Lim et al. 2013, Webster et al. 1994, Berdoy et al. 2000, Poirotte et al. 2016). It is theorized that the increased risky decision making induced by T. gondii cysts on the brains of infected intermediate hosts increases predation by felids, and hence parasite transmission.

Years later, while working for the Yellowstone Wolf and Cougar Projects to understand interspecific competition and predator-prey dynamics between wolves, cougars, and elk, Dr. Wirsing's booming voice continued on repeat in my head "perhaps it’s the little things controlling the system". I soon began discussing parasitic manipulation with co-lead author Kira Cassidy, and co-author Erin Stahler. We worked for one of the best wildlife studies in the world to understand the role that T. gondii may play in ecosystem interactions. At the same time, a recent publication out of the Mara Hyena Project, where exposure to T. gondii led to increased behavioral boldness and increased probability of lion-caused mortality in spotted hyenas (Gering et al. 2021). That study was the first of its kind in wild large carnivore hosts, and suggested a definitive link between T. gondii infection, behavioral boldness, and risk taking.

Following previous research on disease dynamics in the Yellowstone National Park wolf population we knew that wolves had been exposed to T. gondii (Brandell et al. 2021). What we didn't know however, was what factors drove T. gondii infection, and if exposure to T. gondii affected wolf behavior. The stage was set, and we dove straight in.

First, we tested whether individual age, sex, social status, coat color, and/or a metric of wolf pack overlap with cougars predicted exposure to T. gondii. Contrary to previous studies, our results did not indicate that likelihood of exposure to T. gondii increased over time, nor that individual sex (based on external reproductive organs) had a large effect on its own. The most important predictor was our metric of annual wolf pack territory with areas in YNP where cougar density was greater than or equal to 1.8 cougars/100 km2. We estimate that a wolf with low cougar overlap has a ~4% probability of testing positive for toxoplasmosis (the disease caused by T. gondii), medium overlap ~12% and a wolf with high annual pack territory overlap with cougar density is 28%.  So, wolves living in areas with T. gondii’s definitive host are more likely to get infected than wolves in areas with fewer felids.

Next, we identified three behaviors: 1) Dispersal from one's natal pack; 2) Becoming a pack leader; 3) Approaching people or vehicles (deemed "habituation") and two causes of death: a) being killed by other wolves (i.e., intraspecific mortality); b) being killed by people (i.e., anthropogenic mortality) that could be deemed "risky" for wolves. From here we built generalized linear mixed models to predict how demographic covariates including sex (based on external reproductive organs), system (where in YNP wolves lived, either in the park interior or on the northern range of YNP), amount of time monitored (as a proxy for age) and T. gondii serostatus.

To our surprise, T. gondii serostatus was an important predictor of leadership and dispersal behavior in wolves but was not important for predicting habituated behavior or a cause of death. T. gondii may be less important for these behaviors as habituation, human-caused and wolf-caused mortality are indicative of behaviors that wolves, being a social species, may learn from conspecifics and therefore not as predictable in regards to T. gondii infection.

These results indicate that T. gondii serostatus can have an enormous impact on wolf behavior and population dynamics. Given wolves’ ability to affect ecosystem processes and social learning, T. gondii's effect on wolf behavior may ripple beyond the infected individuals. Seropositive individuals being more likely to disperse and/or become pack leaders may increase breeding opportunities for infected individuals. Even though vertical transmission of T. gondii (mother to offspring) is very unlikely, wolves that are leaders are usually the ones in the pack that are producing offspring, a great benefit for achieving that social position. Since T. gondii infection influences the likelihood of becoming a leader, the parasite is indirectly impacting important vital rates. We are just beginning to learn more about social learning in group living species, where knowledge is passed to conspecifics, generally from older individuals, or those in leadership positions. If wolf pack leaders are more likely to have contracted toxoplasmosis, they may lead uninfected packmates into situations where transmission risk increases or, may teach risky behaviors to uninfected packmates, without a change in T. gondii serostatus.

Just as Dr. Aaron Wirising told me back in 2012, "perhaps it is the small things running the world." Given our results, and the possible implications of T. gondii infection in the wild, now published for spotted hyenas and gray wolves, we implore anyone studying animal behavior and ecology to consider the effects of parasitic infection. Untangling the complex web of ecosystem interactions and interspecies relationships might just come down to the little things. 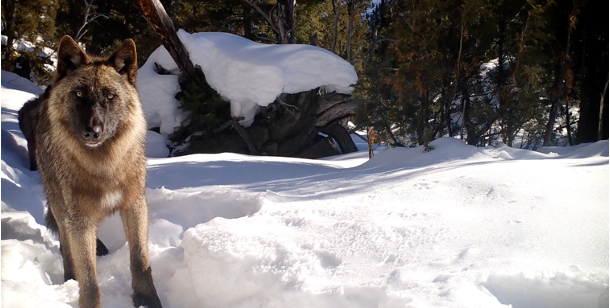 We studied the effects of Toxoplasma gondii on wolf behaviour in Yellowstone National Park, Wyoming, USA. We found that seropositive wolves were more likely to make high-risk decisions such as dispersing and becoming a pack leader, both factors critical to individual fitness and wolf vital rates.