Patterns of skeletal integration in birds

While the overall sizes of different elements of the skeleton have a strongly modular organisation in birds, the same cannot be said for variation in the shapes of those skeletal elements. Ecological adaptation is a key driver explaining the difference.
Andrew Orkney
DPhil candidate, University of Oxford
Follow
Like Liked by shangchengrui
0

Analysis of high-resolution three-dimensional models of 149 extant bird species reveals contrasting patterns of integration across the avian skeleton for size and shape: element sizes within body regions are strongly modular, but element shapes are less so and have stronger relationships with ecolog…

Yet, this fantastic variety presents a paradox, because the evolution of the bird skeleton is considered to be tightly restricted by the mechanical requirements of flight- leaving limited latitude for ecological adaptation.

We are therefore presented with a simple question:

How do flying animals balance ecological adaptation with the restrictions imposed by flight?

Our research addresses this puzzle, assessing one of the key hypotheses that has been suggested to explain avian diversity - ‘modular’ evolution.

Modular evolution is the idea that different regions of the skeleton are able to evolve semi-independently of one another. In other words, you could think of a bird as being a bit like a Swiss army knife, with different body parts able to do quite different jobs.

For example, in a bird such as an eagle, the feet could be specialised for catching prey, the wings for soaring high in the sky, and the beak for tearing meat. This potentially allows a range of different ecological and mechanical demands to be satisfied by adaptation of different body parts to different jobs (Figure 1).

Evolutionary changes in one wing bone might therefore be expected to be accompanied by changes in other wing bones, but to be independent of changes to the bones of the head or legs.

The hypothesis of modular evolution has been central to our understanding of birds.

However, evidence has been quite limited and mainly comes from analysis of the relative lengths of different bones. This approach does not capture detailed anatomical shape data, such as the morphology of joint surfaces, which are likely to form an important component of ecological adaptation in birds. It is, furthermore, easy to imagine aspects of skeletal shape, such as the shape of the beak and skull, having strong ecological relevance that simply is not adequately represented by the overall size or length of those features. For example, a slender beak for poking in flowers and a hooked beak for ripping flesh might both have the same lengths.

There was hence an impetus to fully investigate the role of subtle changes in skeletal shape, across the entire bird body-plan, to examine whether they exhibit a modular evolutionary organisation, similar to that reported for bone sizes, and to probe the extent to which they facilitate ecological adaptation. Would the nuances of skeletal shape reveal the same story as the relative sizes of different bones, a more detailed impression, or a different story entirely?

To address this knowledge gap, we would need to take advantage of advanced 3D imaging techniques, multivariate statistical methods and novel insights into the evolutionary relationships between birds, informed by genetic sequencing. Together, these approaches allowed us to begin untangling the complex web of interactions and trade-offs that describe the interface between ecology and skeletal shape in birds.

This required 149 birds, from the tiniest hummingbirds to the heftiest vultures, to be CT-scanned, so that constellations of landmarks could be placed across their skeletons to fully describe the size and shape of their bones. Ultimately, Alex Bjarnason placed over 130,000 landmarks across almost 2000 separate bones, creating one of the largest morphometric datasets to date. Alex explains that the motivation for this extensive data collection was partly to study large evolutionary changes across the skeleton in greater depth than had previously been possible. He also emphasises that the CT-scans and morphometric data have been made publicly available for other scientists to use, in order to democratise access to datasets for the global research community.

Anatomical information was not the only hard-won data. Brigit Tronrud occasionally found herself reading floral prose, written by birdwatchers in the nineteenth century, as she scoured the literature and online databases in order to assemble comprehensive descriptions of the ecological demands on bird hindlimbs.

The task of deciphering all of this information, and finding structure and patterns inside it, fell to Andrew Orkney and Roger Benson, who used a variety of sophisticated statistical methods to interrogate the dataset.

At first, the results we uncovered came as a surprise. We found that the relative sizes of different bones have a highly modular organisation, as expected from previous studies. However, skeletal shape was much less clearly organised, with evidence for coordinated evolution of bones from very different parts of the skeleton, such as the leg bones and the shapes of the leg bones and the skull (Figure 2).

In other words, bone shapes did not show strongly modular evolution. Furthermore, variation in skeletal shapes exhibited a much stronger relationship to ecology than variation in their relative sizes.

This presented a fundamental challenge to the conventional narrative that a strongly modular organisation of the bird skeleton has played an instrumental role facilitating their ecological adaptation. If this were true, we would expect bone sizes to show a stronger relevance to ecology than seen in bone shapes. Instead, we found the opposite.

Indeed, Andrew Orkney comments that we were able to show that relevance to ecological adaptation was a key driver explaining the difference in organisation between the highly modular organisation of skeletal size, and diffusely-organised skeletal shape, strongly contradicting established thinking.

Brigit Tronrud reflects that, while initially surprising, these findings should be regarded as intuitive. She explains that many birds actively use their hindlimbs in conjunction with their beaks, as they rip prey apart or gather nesting material, for example.

Perhaps, then, a modular organisation of bone sizes across the bird body-plan is a reflection of anatomical restrictions related to growth or the intense physical demands of flight- rather than a means by which birds facilitate ecological adaptation. In order to express ecological adaptation, birds must overcome this network of restrictions, and this is achieved by subtly altering skeletal shapes in coordinated responses involving bones from across the body- not just specific regions.

This intriguing result prompts Roger Benson to wonder whether other diverse radiations of vertebrates have exploited similar evolutionary solutions to adapt and survive. Perhaps it is routine for body-plans to evolve under multiple schemes of organisation, superimposed upon and interacting with one another. In particular, this prompts us to question how other diverse radiations of flying animals, such as bats and pterosaurs (an extinct group of flying reptiles), have navigated the trade-off between ecological adaptation and the mechanical constraints of their aerial lifestyles. 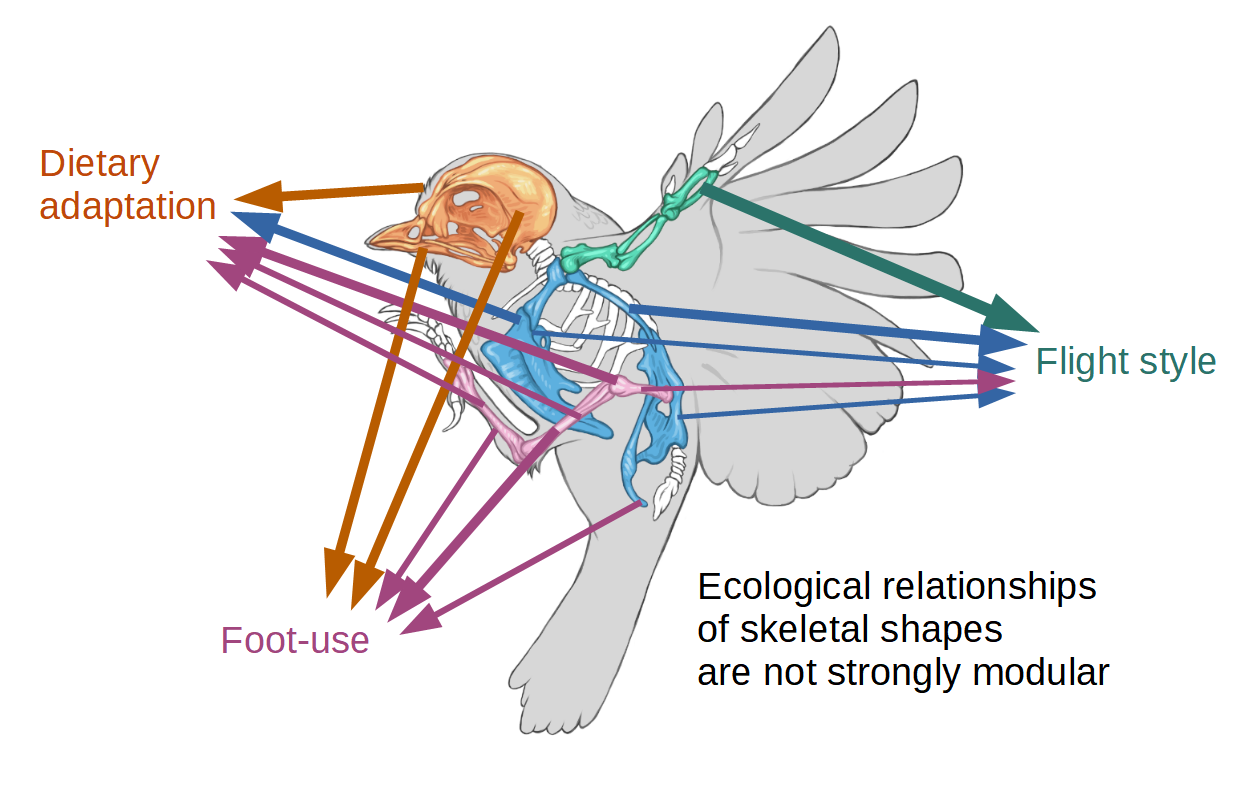 Patterns of skeletal integration in birds

While the overall sizes of different elements of the skeleton have a strongly modular organisation in birds, the same cannot be said for variation in the shapes of those skeletal elements. Ecological adaptation is a key driver explaining the difference.