By constructing experimental plant neighborhoods and performing a subsequent microbiome transplant experiment, Meyer et al. (2022) have provided evidence that a plant's neighbors can play a decisive role in the formation of its microbiome.
Kyle Meyer
Postdoctoral Researcher, University of California, Berkeley
Follow
Like Liked by Gao Jianguo and 4 others
0

Plants form associations with a multitude of microorganisms over their lifetime, collectively referred to as the microbiome. While we are still learning about the consequences that microbiomes have on a plant’s health and fitness, numerous examples can be found where microbiomes benefit their host, including protection against pathogens1,2, synthesis of hormones used in development3, and fixation of atmospheric N2 into forms available to plants4. The apparent importance of plant microbiomes has fueled a line of research seeking to better understand how these microbiomes form. This area of research tends to focus on two themes: 1) the intrinsic factors that shape the microbiome, such as a plant’s physical, chemical, and immunological traits; and 2) the extrinsic factors that influence microbiome formation, such as the environment that a plant lives in, including its ecological context. Together this research is bringing a unique perspective to plant health and fitness, and could give rise to a new wave of agriculture that incorporates microbiome management into common practice.

Microbiomes often differ among host species. This is generally true across both plants and animals, and has been referred to as species identity effects, or genotype effects, depending on the resolution of host genetic distinction. Species identity effects arise through a variety of factors intrinsic to the host, including differences in resources made available to the microbiome5,6, physical barriers preventing migration of the microbiome7, immune activity to target certain microbes8,9, or molecular signaling forming a sort of “dialog” of cues that can attract or deter microbes10. Such mechanisms form the basis of host selection on the microbiome and thus either directly or indirectly influence the membership, diversity, and/or abundance of the microbiome.

While these intrinsic factors have the ability to shape the microbiome, extrinsic factors including the host’s ecological or environmental context have the potential to alter the outcome of the host selection process, in some cases rendering species identity effects weak, variable, or even nullified altogether. As a hypothetical example, an organism that relies on specific non-inherited microbes to survive will rely entirely on dispersal from the environment to recruit these microbes. This would mean that if the plant happens to be in an environment that lacks suitable microbes for its microbiome, for example an environment dominated by a different plant species, it may develop a microbiome that is mismatched to the selective mechanisms it has evolved, and this ultimately could mean the plant has poorer health throughout its life and/or a lower fitness.

Given that dispersal can play such a crucial role in the recruitment or maintenance of a host’s microbiome, many researchers are turning to this theme to better understand the basis of microbiome formation. For instance, a study of humans showed that by direct or indirect contact, roommates share considerable overlap in their microbiome, and that dog owners can acquire certain dog-associated microbes into their skin microbiome11. A study of zebrafish also revealed that co-housing different genotypes of fish, such that dispersal may take place between them, has the potential to diminish the genotype-level microbiome differences that would arise if the fish were housed separately12. In plants too, the importance of dispersal is gaining recognition through several observations. For instance, a study in northeastern North America showed that tree microbiomes, as well as their level of host specialization, are influenced by the makeup of the surrounding tree community13. In an unrelated study, researchers found an effect of site on tree microbiomes14, which can serve as a proxy for local context, including surrounding vegetation. It thus appears that if we are to more holistically understand the formation of microbiomes, we need to look not only at intrinsic factors related to host selection, but also more broadly at the context in which the host resides.

One way to directly test the impacts of environmental context on microbiome assembly is to experimentally manipulate it. We took this approach to determine how the above-ground (leaf) microbiome is influenced by the plant neighborhood in which the plant resides. We chose three plant species that differed enough in their traits and life history strategies to select for distinct microbiomes, including tomato (Solanum lycopersicum var. Moneymaker) bell pepper (Capsicum anuum var. Early Cal Wonder) and bean (Phaseolus vulgaris var. Bush Blue Lake 274), which differ in their growth rate, habit, leaf waxiness and come from genetically distinct and relatively divergent lineages. The expectation was that these plants would form distinct microbiomes, thus exhibiting species identity effects in the absence of any experimental treatment. To test whether the identity and size of their neighbors influence the formation of their microbiomes we established the plants in experimental neighborhoods whereby a focal individual was grown in the center of a ring of 8 neighbor plants (or no neighbors). We used fully reciprocal combinations of focal and neighbor plant species, and replicated every type of neighborhood six times. In other words, tomatoes were surrounded by tomatoes, beans, peppers, or no neighbor and vice versa. So with this design we could see whether neighbor identity was important for microbiome formation, as well as whether certain species were more influential neighbors or more susceptible focal plants. Lastly, to test whether neighbor size mattered, we added a time component to the study. We split the experiment into three time points whereby after one month in the field, the focal plants were harvested and then replaced with the same species that was the same age as the original planting, while leaving the neighbors to continue growing. Thus the focal plants were all the same age at each harvest, but the neighbors grew larger for each subsequent harvest.

Experimental plant neighborhoods shed light on plant microbiome formation. Top-left: T. Caro, yours truly (K. Meyer), and S. Lindow getting ready to begin planting the experiment’s 72 neighborhoods (504 plants). Not pictured are C. Hernandez, R. Debray, X. Zhang, E. Mehlferber, and B. Koskella who also helped with planting. Top-right: a tomato focal plant surrounded by a bean neighborhood, just after initial planting. Bottom-left: A bean focal plant in a tomato neighborhood after one month in the field. Bottom-right: co-author R. Porch getting ready to measure attributes of the neighborhoods before our first harvest.

The other powerful part of experimental microbiome work is that you can directly control which bacteria go where. In other words we can control dispersal and test whether our results in the field still hold. We devised a microbiome transplant experiment where we extracted microbiomes from the experimental plants and sprayed them onto either the same species that they came from or the species that previously surrounded the donor plant. We found that species identity had the largest effect on microbiome composition, and that the second strongest effect was donor plant species. In other words, these new hosts reshaped the microbiome, but the microbiome still carried a signal of its past host, thus supporting the importance of dispersal source. Our design also allowed us to test for an effect of the donor plant’s neighbors, a sort of “grandparent effect”. While we did not detect such an effect for all plants, when we looked specifically at peppers we found that the previous neighbor effect was not only detectable, but it was stronger than the donor species effect. This effect is kind of like the ghost of dispersal past lingering in a microbiome, and suggests the potential for microbiomes to carry traces of their past associations, even after multiple dispersal events. An analogy that might help to better understand this result is a child inheriting a microbiome from a parent that carries with it traces of that parent’s previous home, pet, or roommates.

This study reinforces the idea that a host’s context is a critical consideration for understanding its microbiome. For plants, this context includes its immediate neighbors, but these results are in line with studies on cohabiting people as well as co-housed fish, suggesting there is likely some generality to these findings. We added to this narrative by showing that the identity of the neighbor is important, in that certain neighbors appear to be more influential than others. Moreover, our results show that the size of neighbors is proportional to their neighborhood effect. These results could ultimately translate over into agriculture as we learn more about the benefits microbiomes can offer plants. For instance, efforts could be guided towards managing the populations of beneficial microbes in agricultural settings by maintaining a certain density or composition of plant species. Such efforts could also translate into ecological restoration to bolster the survival of rare plants by maintaining populations of microbes they associate with. Further work in this area is bound to be bountiful, but in the meantime lets focus on the work of carrying microbial traces from every facet of our life. 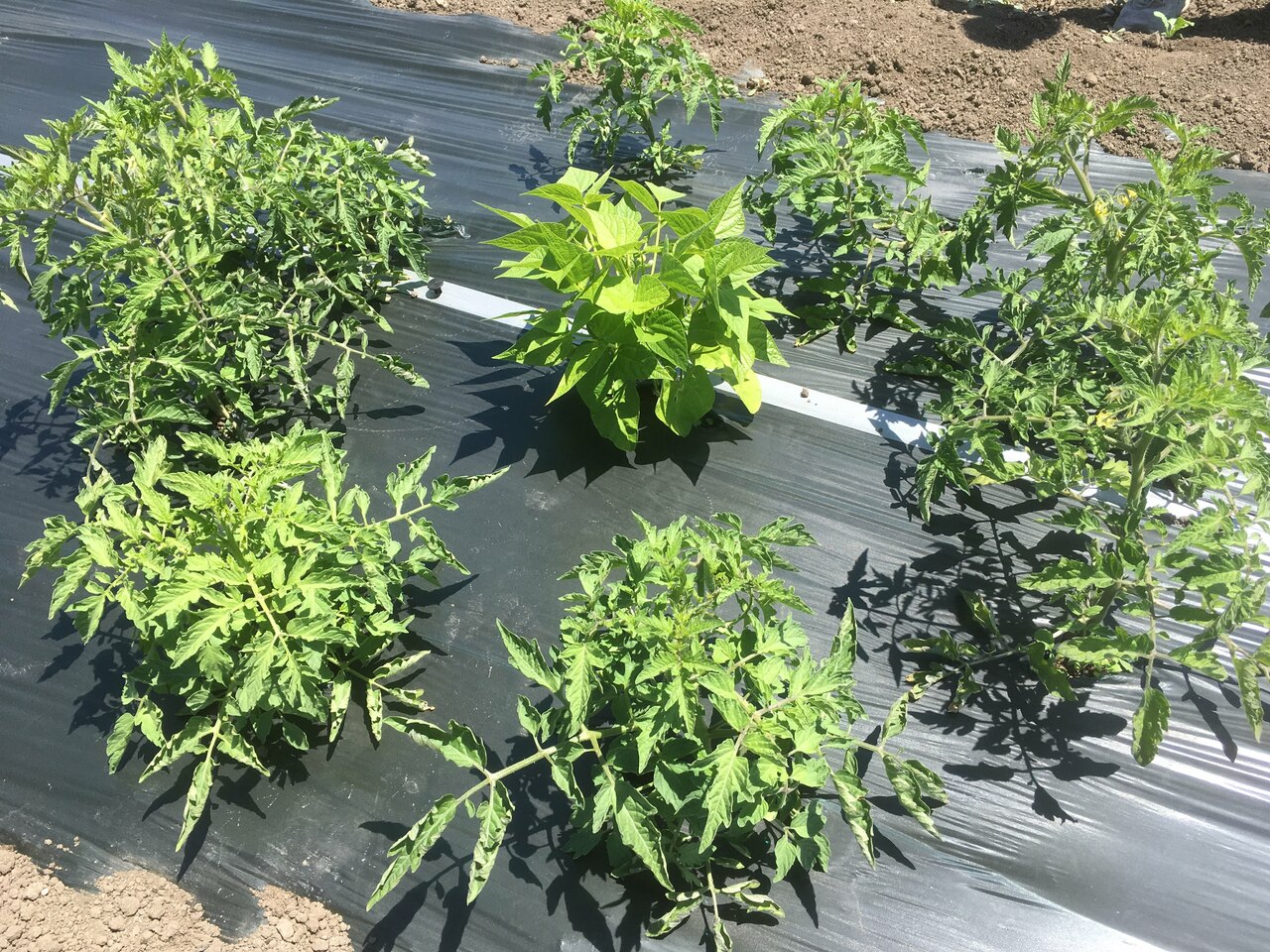 By constructing experimental plant neighborhoods and performing a subsequent microbiome transplant experiment, Meyer et al. (2022) have provided evidence that a plant's neighbors can play a decisive role in the formation of its microbiome.