We modelled celestial and geomagnetic compass courses among inexperienced migrants to reveal spherical geometry and flight capacity factors determining their migratory performance
James McLaren
Postdoc, University of Oldenburg
Follow
Like Liked by Evelina Satkevic and 2 others
0

Predicting performance of naïve migratory animals, from many wrongs to self-correction - Communications Biology

A model is developed for assessing compass-based naïve animal migration, revealing effects of spherical geometry on migratory performance, and related mechanisms of self-correction.

Throughout written history, seasonal migrations of birds and other airborne creatures have been a source of wonder and inspiration, prompting ideas ranging from birds hibernating under mud to undertaking flights to the moon. Nowadays, we know that many migrants cross continents, timing their departures to reach more favourable climes, and typically dividing their journeys into multiple daily or nightly flight-steps. Thanks to advanced tracking and computational methods, we can now accurately predict and monitor the density of migration across species and geographical ranges, including of agriculturally-important insects.

Our study, like the quoted poetry, more simply describes bird migration in terms of “well-aimed” direction, geometry and equations. Naturally, modelling migration as well-aimed flight-steps does not fully capture its intricacy and diversity. However, it can inform us about how inexperienced (naïve) migrants manage to reach remote destinations. Three fundamental questions – How to aim? – Which cue is primary? – How to stay the course? – are unresolved, particularly regarding species migrating by night, depriving them of most visual cues.

Many migratory bird species have access to a sun compass, star compass, or geomagnetic compass. We are getting ever closer to understanding the sensory mechanisms underlying magnetoreception. Experienced (adult) bird migrants, similarly to their oceanic counterparts, can assimilate map-like information to reach previously-known migratory goals. Contrastingly, many naïve migrants are thought to complete the bulk (long-distance phase) of their inaugural migrations based on inherited migratory compass headings, often termed clock-and-compass migration. The resultant compass courses vary with choice of primary compass cue (e.g., sun, stars or geomagnetic), and according to how headings are derived from the primary cue. Star compass and geomagnetic compass courses maintain constant headings relative to their North-South axes, whereas magnetoclinic and sun compass headings typically shift increasingly Southward, particularly for the time-compensated sun compass, where migrants account for the sun’s diurnal arc.

Which compass for whom and where?

However, there is little consensus regarding which compass migrants use when and where – does choice depend primarily on the availability of twilight (celestial compass) cues? Or does the shape of routes together with spatiotemporal patterns of incident winds, resource availability and the Earth’s magnetic field render compass hierarchy an inextricably population-specific question? Until now, assessments of migratory compass choice have not considered robustness to orientation errors and displacements en route.

How to stay the course?

Over many flight-steps (Fig. 1a), orientation errors tend to even out, as a many-wrongs effect. However, it is unclear how imprecise flight-steps can explain highly precise migrations, such as by monarch butterflies (Danaus plexippus) equipped with a sun compass reaching Mexican wintering grounds from Canada. Except in the ‘flat-Earth’ case (inset, Fig. 1a), we lack a general formulation and assessment of compass course performance on the globe, particularly at high latitudes, where for human navigators “the rapid convergence of the meridians renders the usual convention of direction inadequate for some purposes”. The effect of cue-transfers within flight-steps, e.g., between a sunset and star compass on orientation precision, also needs to be assessed (Fig. 1b).

While it is well known that juvenile bird migrants are particularly prone to being displaced by wind, some displacement experiments indicate that they can partially self-correct for such displacements. But how might that be possible without a map sense?  It turns out, that partial correctional shifts would be feasible if migrants’ directional responses to the stars or sun is time-compensated to account for their rotation. The star compass of migrating birds does not seem to work in this way, but the sun compass has not been analogously tested.

To address the above unknowns, and identify key factors predicting the relative robustness of compass courses across the globe, we developed a modelling framework incorporating algebraic formulations and numerical simulations including global geomagnetic data. We simulated robustness among compass courses globally for a ‘generic’ migrant, and for 9 species with contrasting migration routes (7 bird species, a bat and the monarch butterfly). Using circular statistics and non-linear regression, we then generalized the ‘flat-Earth’ formulation of performance (Fig. 1a) to include compass-specific sensitivities to spherical geometry effects and flight-step errors.

We found that, for any given route, compass courses vary strongly in their sensitivity to error, depending on latitude, flight direction and any imprecision in transferring between compasses. This was related to a trade-off between imprecision stemming from any cue-transfer (Fig. 1b), and the remarkable capability of time-compensated sun compass courses to self-correct (Fig. 2). We further assessed how such 'self-correction' depends on how migrants update their inner clocks (most likely during extended stopovers rather than between consecutive flight-steps). As a result (see Fig. 3), sun compass courses performed best – and most closely resembled – the daytime migration routes of the monarch butterfly (Danaus plexippus) and the longest nocturnal routes such as willow warblers (Phylloscopus trochilus yakutensis) migrating 13,000 km from East Siberia to East Africa. Constant-heading star or geomagnetic courses (loxodromes) performed best across short to medium distances, like for the common rosefinch (Carpodacus erythrinus) migrating from South-East Europe to India. The gradually-shifting magnetoclinic compass was found to be over-sensitive to imprecision and untenable for longer-distance and East-West oriented migration routes. Based on simulations of the nine modelled species for biologically-relevant error scenarios (0-60° expected error among flight-steps), we could predict > 97% of variability in compass course performance among the species tested based on three factors – number of flight-steps, a spherical geometry factor and (daily or nightly) flight-step distance.

We can now predict naïve migratory performance among airborne migratory species as a function of factors related to route geometry and flight capacity. Our study supports twilight sun-compass orientation being key to many high-latitude and long-distance inaugural migrations. However, this does not exclude geomagnetic compass use by long-distance migrants, not least among night-migratory species (given that stars are often obscured). To test the possibility of time-compensated sun compass use and self-correction, we recommend controlling for inner clock updates in experiments testing orientation among real or virtually displaced migrants. Our modelling framework can be extended to assess how inherited migratory orientation can facilitate exploitation of favourable migratory habitats. For example, in the simplest case, our models could include migratory detours, with a second migratory heading triggered by geomagnetic or other environmental factors. While the jury is still out regarding the ubiquity of inherited compass headings by naïve migrants (e.g., as opposed to gradient-based navigation), our study suggests that clock-and-compass migration can provide a basis to reach restricted destinations, illustrating how simple rules can potentially explain complicated patterns observed in nature. 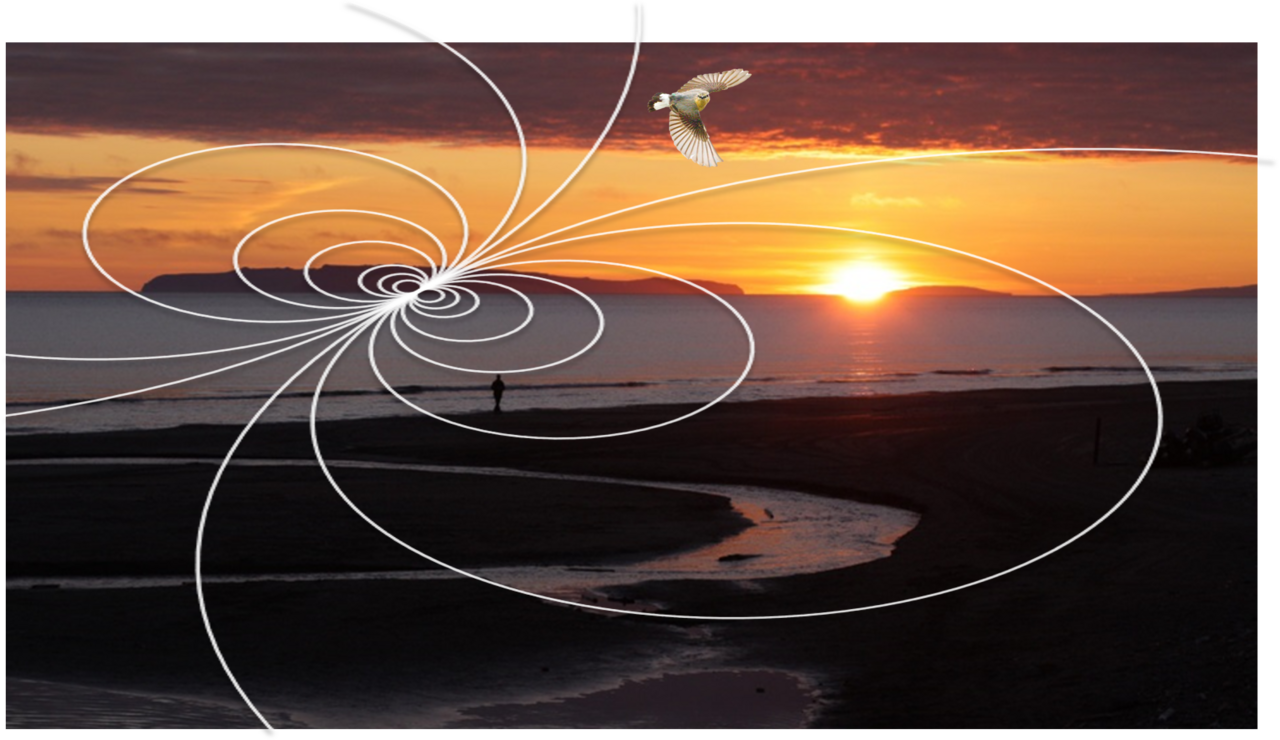