Our new study reveals the timing and rate of morphological change in living and fossil reptiles, falsifying some of the most basic tenets of macroevolutionary theory.
Tiago R. Simões
Postdoctoral Fellow, Harvard University
Follow
Like Liked by Ruth Milne and 3 others

Nearly 80 years ago during the 1930s, a mammalian paleontologist was eating alone in the staff table of the American Museum of Natural History in New York City. This was a scene that used to repeat itself almost every day, with most of the other staff probably wondering what was going on the mind of this quiet and thoughtful colleague. This paleontologist was George Gaylord Simpson, who as later described by his former colleague at both the AMNH and Harvard’s Museum of Comparative Zoology, Ernst Mayr, ''was a very quiet individual and with whom he rarely debated his ideas''. At this time, probably only a handful of people would be aware that Simpson was developing an entirely new view of the evolutionary process, combining information from early genetic theory, morphology, and the fossil record, which would be later published in 1944 as the book “Tempo and Mode in Evolution”. Ironically, Simpson ended up relying on the help of his wife and colleagues to complete the book during his time serving in the World War II between 1942 and 1944. In his book, Simpson was perhaps the first person to combine such distinct disciplines into an integrative view of the history of life that was one of the major pillars of the modern evolutionary synthesis. Ideas that were further advanced and much expanded in the perhaps more famous “sequel” of that book published in 1953, “The Major Features of Evolution”.

In his books, Simpson accumulated evidence from the emerging science of genetics, with a large compilation of data from the fossil record, to first recognize some of the major patterns governing the evolution of complex life. Simpson understood that species had to undergo speciation and extinct at different rates, concomitant with changes in the rates of morphological change and morphological diversity (or disparity) across geological time and the tree of life. The emerging patterns detected by Simpson across many different animal groups were the following: during times of ecological opportunity (e.g., after the demise of several species after mass extinctions) existing species tend to diversify more quickly as they invade new habitats and develop new ecological roles (invade new “adaptive zones”). Higher speciation tends to be coupled with fast rates of morphological change and an increase in the available diversity of body types. Once those vacant adaptive zones are occupied by the new emerging species, rates of morphological change and speciation tend to return to lower levels (e.g., pre-extinction levels). These special periods in the history of life representing the origin of new animal groups and body plans in a short span of geological time were referred to as adaptive radiations. According to Simpson, they would explain the origin of most of the diversity of life on earth, both today and in the distant past. With that, Simpson inaugurated the entire field of macroevolution and the study of adaptive radiations in evolutionary biology.

In the last 76 years since the publication of the first of Simpson’s book, most of the work on evolutionary radiations have been conducted by neontologists studying the radiation of extant (“modern”) lineages—famous examples include the radiation of cichlid fish in African lakes, Darwin’s finches in the Galapagos, and anole lizard in the Caribbean. However, the original context upon which those ideas were first formulated—the fossil record and the origin of major animal groups—was largely limited by the fossil record and methodological tools available. Apart from invertebrates with mineralized skeletons and mammalian teeth, few other groups provided a rich enough fossil record to understand broad scale evolutionary dynamics in deep time. Even in such cases, it was nearly impossible to estimate the time of origination of those particular groups since the earliest fossil record of a group must necessarily be younger than the actual time of origin of the same group (sometimes millions of years younger) owing to the incompleteness of the fossil record.

Thankfully, methodological advances in obtaining additional data from fossils (such as CT scanning), online databases (e.g., Paleobiology Database), and the exponentially larger number of paleontologists collecting fundamental data across the tree of life have highly improved our knowledge of the fossil record. This was further boosted by more precise and reliable dating of those fossil occurrences. Perhaps the most incredible achievement of the last decade was, however, the co-option of methods initially developed to understand rates of molecular evolution and calibrating the tree of life using molecular data (molecular clocks) to also handle morphological data. As such, those techniques have enabled paleobiologists and other evolutionary biologists to calibrate and measure rates of morphological change across the tree of life using the fossil record alone, or combining the fossil record with genomic data to understand major evolutionary patterns across both extinct and modern branches of the tree of life.

In a paper just published by myself and colleagues in Nature Communications last week, we utilized the methodological advances mentioned above to investigate some of those hypotheses first put forward by Simpson in the context of the evolution of the major lineages of reptiles during the last ~320 million years.

We found that novel body plans almost invariably originate at high evolutionary rates of morphological change, as predicted by Simpson. However, to our surprise we detected that independently evolved functionally similar body plans—such as the “armored” body plan of turtles and placodonts, or the snakelike body of snakes and amphisbaenians—originated under highly disparate evolutionary rates of morphological change. We also realized that the major morphological transformations (“phenotypic radiations”) originating new reptile groups and body plans seem to occur intermittently in early reptile evolution, and not necessarily linked to an adaptive radiation. In fact, most of those drastic morphological changes in the origin of most reptile groups seem to predate the taxonomic radiation of those lineages by several million years. This latter finding contradicts the classical model of adaptive radiation first put forward by Simpson, and in fact, support alternative views of long-term evolutionary process put forward by other studies in the past 10 years. This new emerging view on evolutionary dynamics in deep time suggests that punctuated, or episodic, bursts of morphological change, or a slow-paced construction of biological diversity, may govern evolutionary innovation and the origin of major animal groups.

As one of our findings, we also observed that snakes have the highest rates of morphological evolution at their origin relative to all other diapsid reptiles studied by us. We also detect some relatively high rates of fast molecular change in early snake evolution. Both morphological and molecular rates are also much higher than other snakelike reptiles, such as the limbless lizards group called amphisbaenians. This all seems to indicate that snakes are not only represent a dramatically different body plan compared to most other reptiles, but they seem to have developed some of their key anatomical features very quickly, adding another key element to the long-term challenge of understanding the origin of snakes.

We seem to be facing a turning point in paleobiology in which we have access to more and better quality data, and extremely powerful analytical tools, to answer questions we never thought we were able to answer in such detail before. The classical distinction between the work of paleontologists and neontologists is vanishing and, therefore, combining fossils and genomics under increasingly sophisticated approaches are likely to characterize this new phase of “evolutionary paleobiology”. It seems that the new decade ahead will reveal a much greater level of detail over fundamental aspects of the evolution of the major animal and plant groups, and perhaps request a new synthetic view of broadscale evolutionary phenomena to the same extent that led Simpson to overhaul evolution biology nearly 80 years ago. 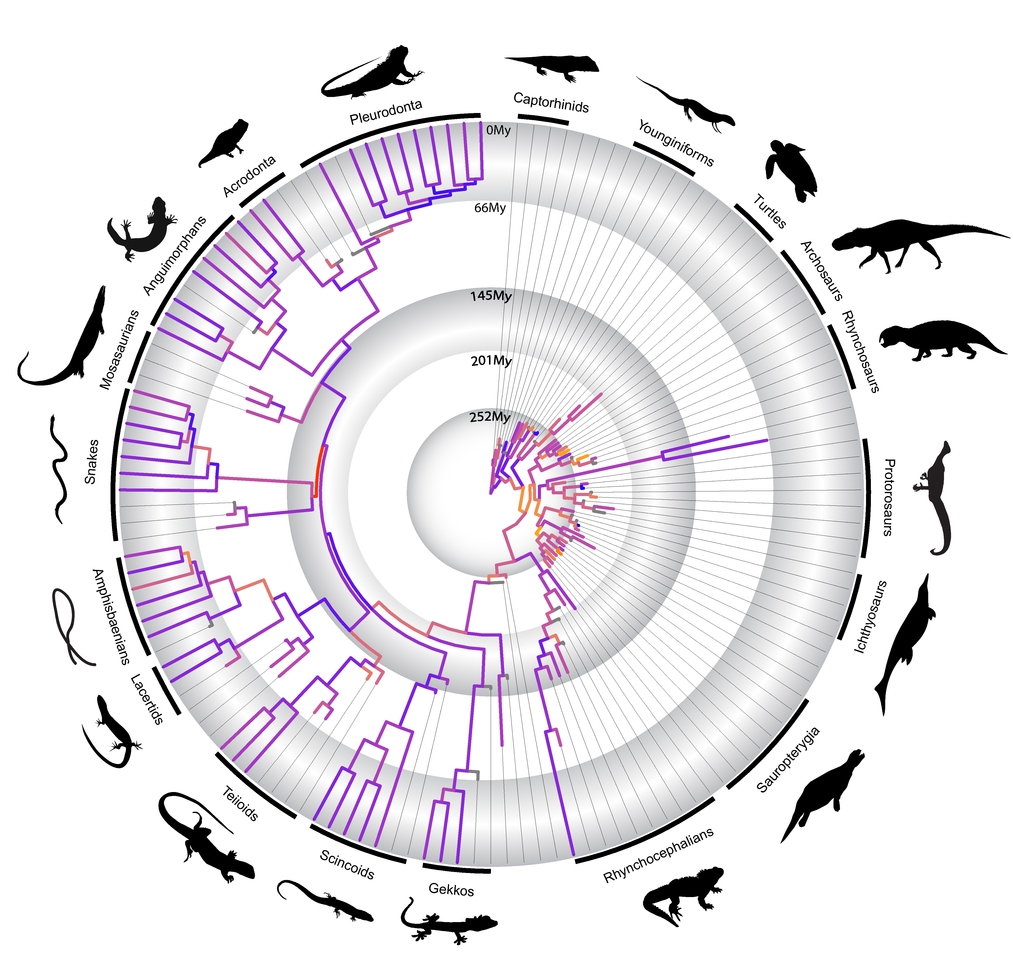 Our new study reveals the timing and rate of morphological change in living and fossil reptiles, falsifying some of the most basic tenets of macroevolutionary theory.