In the third installment of Sea Mink Stories, we head back to Maine to explore the connections between science and local ecological knowledge. How do Mainers perceive modern minks? What do they know about the sea mink? Read on to find out.
Olivia Olson
Student, Middlebury College
Follow
Like Liked by Sorrel Bunting
0

Last summer’s lab work ended as I replaced the final mink bone back in its box, the last of 163 specimens I’d measured over six weeks. It being mid-August, I was excited to go home to midcoast Maine for the last few weeks of summer. Back home I would finally have the chance to share what I had learned about the extinct sea mink (Neovison macrodon) - lost perhaps just a hundred years ago - with my neighbors and ask about their own experiences with minks. In other words, I was eager to hear local perspectives on the living relative of the animal I had been studying in a lab for the last few months, to better understand its habits in the real world. Because sea mink likely went extinct due to human actions, it’s important to be familiar with how people perceive these animals in the present.

Local ecological knowledge (LEK) is the knowledge gained from personal experiences with wildlife, held by an individual over their lifetime. The study of LEK is growing in popularity among conservation biologists because it relates everyday observation to scientific observation, and can thereby bridge the gap between stakeholders and researchers. As a conservation tool, LEK can gauge local engagement with the environment and gather information about threatened or extinct species based on how people interact with the animal in their daily lives.1

Throughout the past summer as I sat in lab studying the ecology and evolution of Maine minks through their bones (see Blog 2), I wondered how I could use LEK to bridge gaps concerning the recently extinct sea mink (N. macrodon) and its surviving cousins, the American mink (N. vison). Having grown up in coastal Maine, I had heard countless stories about minks as “nuisance critters,” but since beginning this project, these stories have taken on new meaning for me as a case of human-wildlife conflict to be listened to and perhaps resolved through data and discussion. Growing up, they were the basis of my understanding of mink ecology: the minks (my neighbors told me) can decimate a chicken coop, leaving their prey uneaten and the farmers frustrated. I heard that there had been mink fur farms along the coast and that the escapees established populations on the islands. According to neighbor, one such farm had even been on Islesboro Island, where I grew up. Despite Islesboro’s central location in the sea mink’s historical range, I had never heard of them before I began my research. The species once so critical to trapping livelihoods seemed to be entirely forgotten by coastal Mainers.

But why had sea mink been forgotten? How could such a culturally significant furbearer, overharvested only 150 years ago, go extinct without a trace left in local memory? Where was the cautionary tale of the sea mink, like that of the passenger pigeon or the thylacine? Could any information about modern minks help us form an ecological blueprint of the ghostly sea mink?

To address these LEK questions, we designed a survey to evaluate what trappers could tell us about historical and present-day mink habits and harvest. The information we intended to gather could help us understand why the sea mink went extinct and why American minks continue to abound on the coast today. Some questions focused on diet, habitat usage, and activity levels. Others asked for opinions on wildlife management and extinction. But our survey would need to wait a few weeks to match the trapping seasonal cycle.

In the meantime, after the summer of laboratory data collection, I was itching to get back to the coast to talk about this animal. And there is no better place to discuss the ecology of the Maine coast and its cultural history than on a boat. So I went sailing.

A multi-day cruise on a Maine Windjammer is full of strong wind, good food, and long stories. With twenty-five passengers, five crew members, and a captain with over 30 years of experience, it is impossible to exhaust our collective repertoire. Captain King of the Mary Day never tires of describing the natural and cultural history of the Maine coast. For example, a passenger might ask a question like, “How long does the lobster season last?”

And he would answer, with a mysterious sea captain twinkle in his eye, “until the lobster leave.”

Shocked, the passenger asks, “They leave? Where do they go?”

The Captain pauses, leans forward to check the radar again, and I jump in: “Deeper water is warmer; lots of fish migrate out.” This is common knowledge among people who make their living on the water. Whether your dad is a lobsterman or you rode a ferry every day to get to school, there are some ocean phenomena that you just know. Such phenomena include the difference between “shedders” and hard-shell lobster, how to find clams in the mudflats, and which bait is best used to catch crabs.

While I learned this and other ecological phenomena through stories passed down from my neighbors, these phenomena have also been observed by scientists, thus indicating the stories’ value as LEK. For example, the patterns of migratory fish that the passenger asked about has been studied extensively. Lobsters migrate to deeper waters to remain at 4ºC for egg development. By migrating offshore, they also avoid dangers presented by coastal ice and high surf.2 Atlantic cod, which feed on crustaceans like lobster, also migrate to deep water in the winter to follow their prey.3 Both lobster and cod have had significant impacts on the Gulf of Maine economy, made evident in coastal Maine culture (think: Cape Cod and N.C. Wyeth’s Deep Cove Lobster Man).

After I answered the passenger’s question, I tried to remember where I learned about marine animals’ migration patterns. Reminded of a song that mentions this phenomenon, I reach for the guitar and start playing:

But the days grow short and the year gets old

And the fish won't stay where the water's cold

And if they're going to fill the hold

They've got to go offshore to find them

Written by Gordon Bok in 1978, “The Ways of Man'' is a sea chanty told from the perspective of a fisherman’s wife lamenting the time her husband spends away from her at sea. While the fish are plentiful in the summer, he goes offshore to fish in the winter, leaving her alone. Although it wasn’t called local ecological knowledge by anyone I knew, this song related the songwriter’s observations with those made by scientists. Thus, the song is an example of local ecological knowledge represented in art. This song is but one example of the constant blending of natural and cultural history that is so familiar to Mainers, especially those who make their living on the water, like Captain King. Not only does he know the ins and outs of every cove in Penobscot Bay, but he is well-versed in the natural and cultural history of the Bay. He has a story for every island or town you can point to while sailing and will recount the geologic history of the region at the drop of a hat.

As we said goodbye after my last trip of the summer, I promised Cap that I would always keep Mainers well involved in my research. He, too, recognizes the wealth of knowledge fishermen and coastal people have in environmental matters. There is an immediate need for local ecological knowledge; my island’s economy was based on the ocean’s natural resources, such as the food it provides and the beauty tourists come to see. I knew I had a lot to learn from my neighbors who know these animals much more intimately than I do. So as another piece of my research, I asked them.

With a clipboard in hand, my research advisor and I attended the Maine Trappers Association Annual Rendezvous in September and later, the Vermont Rendezvous.

With regard to mink, the trappers and hunters shared their knowledge and opinions generously. They knew how mink travel, what they prefer to eat, and where a trap is sure to capture an animal. They described mink swimming, hunting, attacking boots and fingers, and again, decimating chicken coops. Most of the trappers also agreed to send tissue samples from the animals they will trap this winter to my research advisor, Alexis Mychajliw, which will bolster her genetic research on the furbearers of New England. Some recounted the overharvesting of beavers, but assured us that mink will never go extinct. Not one trapper mentioned the extinct sea mink. A species of mink went extinct, but modern trappers weren’t talking about it. Our questions remained unanswered.

We realized our work was cut out for us. We needed more perspectives, more bones. We revamped the survey, and we accessed more natural history collections. Can the sea mink be saved in the cultural consciousness of modern Mainers? Can we use the story of the sea mink to inspire conservation? Stay tuned for more updates on the HEDGE lab’s work with the sea mink. 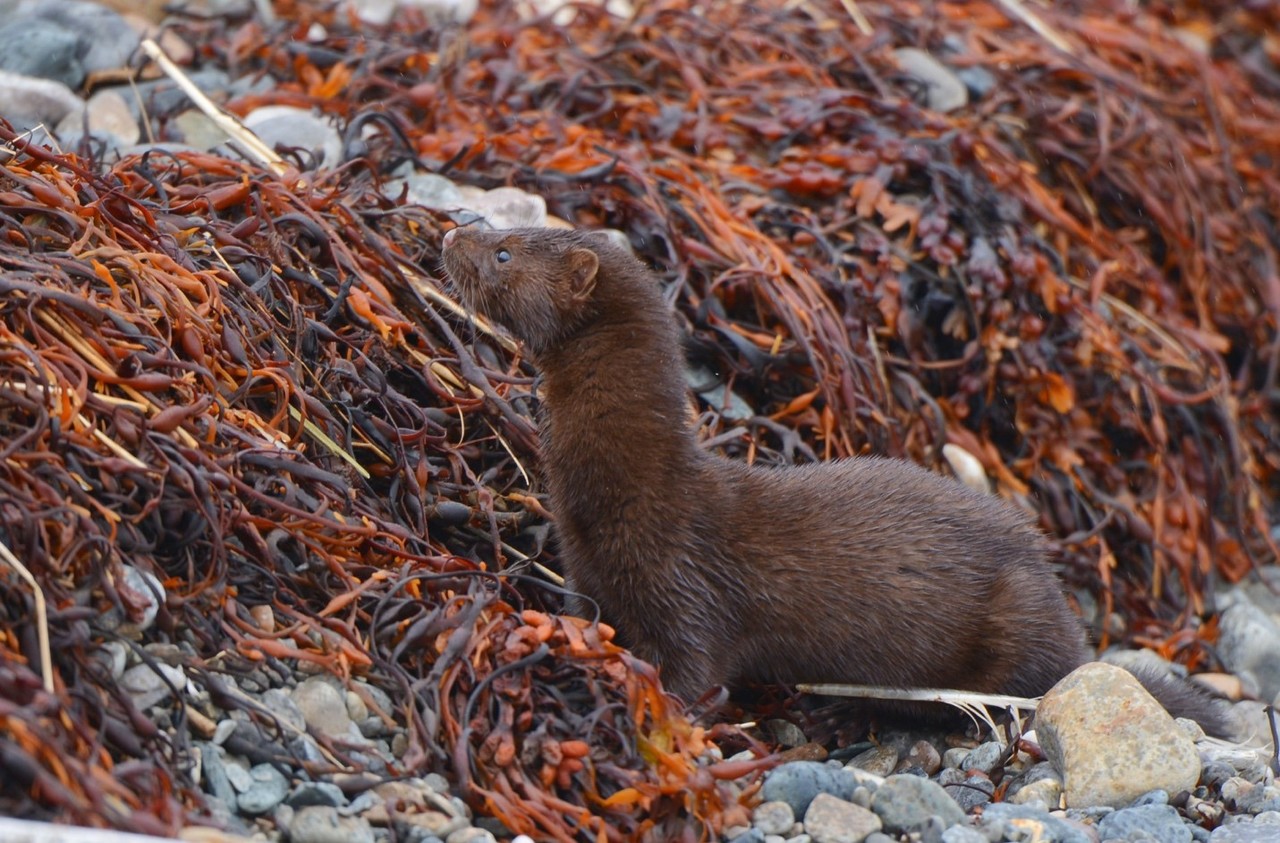 In the third installment of Sea Mink Stories, we head back to Maine to explore the connections between science and local ecological knowledge. How do Mainers perceive modern minks? What do they know about the sea mink? Read on to find out.