Dogs exhibit remarkable variation in colour patterns. Here, the authors identify structural variants of independent regulatory modules for ventral and hair cycle expression of the ASIP gene that explain five distinctive dog colour patterns and trace back the origin of one colour pattern to an extinc…

From Balto to White God to Old Yeller to Jack London's Call of the Wild, the relationship between humans and their companion animals transcends language, culture, and generational time. Our fascination with dogs stems not only from the special relationship between a dog and their human guardian but also the amazing diversity of shape, size, and color apparent among modern dog breeds. Much of this diversity is thought to have arisen during and after domestication 15,000 – 30,000 years ago through artificial selection for traits relevant to specific tasks, performance, and visual distinctiveness, starting with a relatively uniform population or populations of grey wolves (1).

Our research group became interested in dog coat color more than two decades ago (2) based on classical genetic studies from Clarence Cook Little and Sewall Wright (3, 4), in which it was suggested that the mechanisms for switching between two pigment types, red-yellow pheomelanin vs. black-brown eumelanin, were more complicated and more interesting than in laboratory mice. In particular, the intricate nature of red vs. black color patterns such as facial markings on a Doberman Pinscher or the saddle on a German Shepherd Dog are not easily explained by what was known about the mouse melanocortin system, in which the paracrine signaling molecule Agouti signaling protein (ASIP) causes overlying hair follicle melanocytes to switch from making eumelanin to pheomelanin (5). Dog color patterns are further complicated by epistatic interactions such as white spotting and a nomenclature that can be breed-specific and idiosyncratic, e.g., the distribution of pheomelanin and eumelanin in a "red-headed tricolor" Welsh Corgi is similar to that of a "black and tan" German Shepherd Dog.

In mice, regulation of Asip is controlled by two alternative promoters and associated transcriptional start sites: the "ventral promoter" (VP) that, when active, produces a sharp boundary between ventral yellow hair and dark dorsal hair, and the "hair cycle promoter" (HCP) that, when active, produces a yellow band on individual hairs everywhere on the body, the so-called Agouti phenotype (6). In 2004, a former graduate student, Julie Kerns, described the configuration of the dog ASIP gene based on a large genomic fragment cloned from a Doberman Pinscher (7). At the time, we were more interested in protein-coding than regulatory sequences and only later did we realize that the region corresponding to the mouse HCP was deleted in the Doberman Pinscher DNA, an observation made by Chris Kaelin, a senior scientist in the lab (and owner of a chocolate and tan Dachshund).

Fast forward to 2019 when Danika Bannasch, a veterinary geneticist at University of California Davis and an enthusiastic owner of Nova Scotia Duck Tolling Retrievers and Danish Swedish Farm Dogs, decided to spend a sabbatical year with Tosso Leeb at the University of Bern. Danika started her research career in mouse coat color genetics but had spent 20 years working on disease genetics in dogs (8, 9). Tosso's lab had studied ASIP variation in domestic goats and rabbits with different color patterns and characterized the different promoters of the canine ASIP gene (10, 11). At the very first lab meeting of the sabbatical, Tosso’s group presented data on dog ASIP that started a conversation on the fascinating regulation of this gene. Between the resources available in Tosso’s lab and Danika’s knowledge of color patterns and experience in evaluating sequence data for structural variation the fit was perfect. The group in Bern had a large collection of dog whole genome sequences, many with photographs that allowed Danika to think carefully about pattern phenotypes and their potential correlation with ASIP genomic variation. In short order (and in between tours on the European dog show circuit), Danika deconvoluted the dog-specific epistatic interactions and nomenclature, realized that there were six broad types of ASIP pattern in dogs, and correlated each of those with specific structural variants in dog ASIP 5' flanking regions.

Using RNA-seq data and comparative sequence analysis, Danika and Tosso identified regions in dog that were orthologous to the mouse VP and HCP, and described a series of structural variant haplotypes close to the dog VP and HCP that were characteristic for each of the different patterns. In addition to developing a new nomenclature that is consistent and genetically based, one of the key findings to emerge from this analysis is that the modularity of the distinct promoters is utilized in dogs to generate increased trait complexity. In the dog increased expression from the ventral promoter combined with variation at the hair cycle promoter leads to some of the unique canine pattern phenotypes. In fact, the aforementioned Corgi and German Shepherd Dog phenotypes, now referred to as black saddle, represent gradual increased activity of the VP in a ventral to dorsal gradient.

Danika and Tosso's work answered how dogs get their ASIP color patterns, but raised a new question about where those patterns come from. The conventional view of canid evolution history posits that molecular and phenotypic diversity in dogs traces back to grey wolves, which have an ASIP pattern phenotype referred to as agouti (similar to that seen in most Siberian Husky dogs). But Chris realized that the ASIP dominant yellow haplotype, which accounts for the appearance of yellow Basenjis, Boxers, Great Danes, and more, was very different from all other ASIP haplotypes, including that in grey wolves. Furthermore, the ASIP dominant yellow haplotype in dogs was almost identical to that in arctic wolves from Ellesmere Island and Greenland, where all wolves are white, leading Chris to suggest that this haplotype was introgressed from another canid species.

Phylogenetic analysis confirmed this suggestion, and revealed that the dominant yellow haplotype in dogs and white wolves was not only very different from other dog (and grey wolf) haplotypes, but also from that in the coyote, golden jackal, and Ethiopian wolf. We propose that the haplotype responsible for white coat color in wolves and yellow coat color in many dogs represents ghost DNA, introgressed from a now-extinct arctic canid that lived more than 2 million years ago, predating speciation of modern canids. In the same way that almost all human genomes carry a small amount of Neandertal DNA, yellow dogs and white wolves carry a ghost DNA from an extinct canid relative; the difference being that the ghost DNA in dogs is about 10 times older than Neandertal DNA, and we understand its function—to cause a lighter coat.

A connection between ASIP regulatory variation and environmental adaptation is not unique to wolves; the same thing occurs in snowshoe hares (12), parulid warblers (13, 14), and several species of mice (15–17). In the case of white wolves and snowshoe hares, it seems likely that a light coat due to adaptive introgression provided camouflage from prey or predators, respectively, lending an additional interpretation to the phrase "ghost DNA". Furthermore, the increasing availability of ancient canid genomes coupled with an understanding of function makes it possible to assign ASIP haplotypes and infer phenotypes for dogs and wolves that lived tens of thousands of years ago. One of the most intriguing observations is that the genome of the Zhokhov island sled dog (18), 9,500 years old, predicts a "black back" color pattern, similar to the Doberman Pinscher. A black working dog in an arctic environment would be easily distinguished from white wolves, and perhaps is one of the earliest demonstrations of artificial selection. 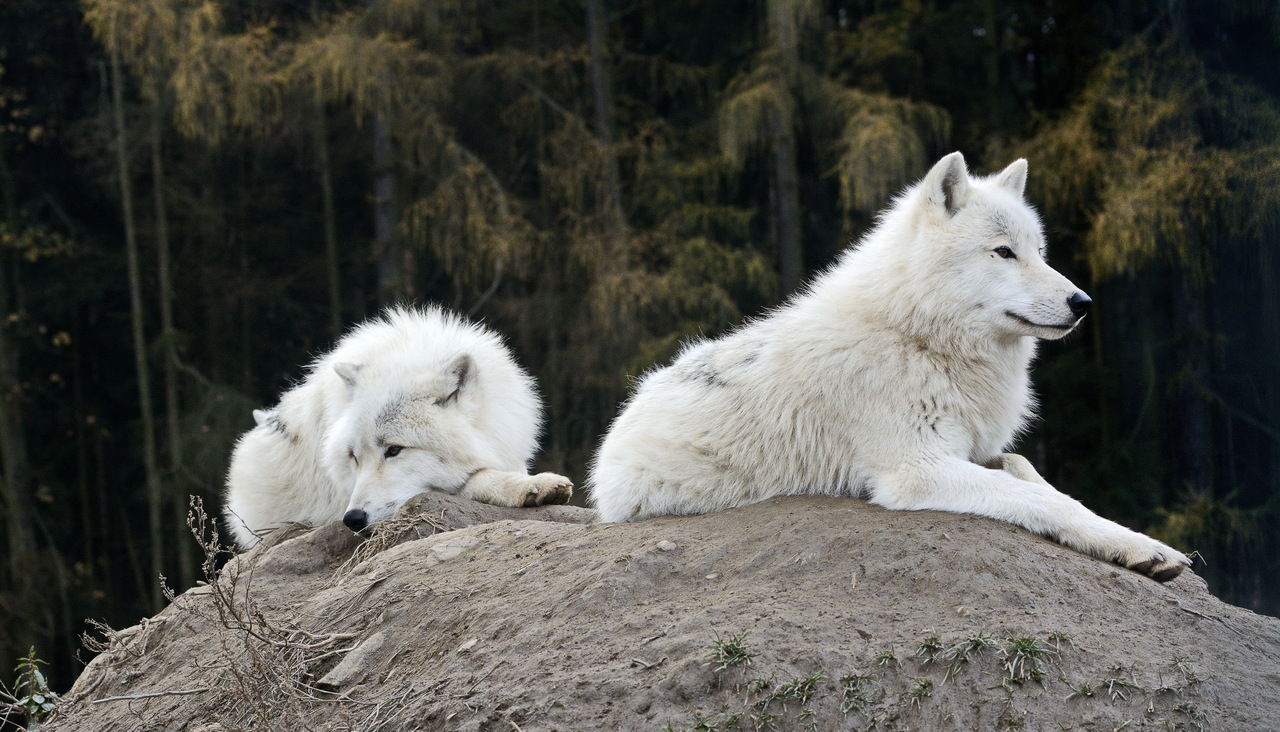