Four species of Pacific salmon in Alaska have gotten smaller over the past 60 years. This decline in size is primarily due to decreasing age, caused by a combination of factors, and may be impacting the ecological role of salmon and their value for commercial and subsistence fisheries.
Eric Palkovacs, Krista Oke & Peter Westley
3 contributors
Like Liked by Marwa Mohamed Ali Ibrahim Saleh

The average body size of salmon has declined rapidly over recent decades. Here the authors quantify changes in body size distributions for Pacific salmon in Alaska and examine the causes and consequences of size declines for ecosystems, food security, and commercial fisheries.

Salmon have been an important resource for people in Alaska for over 11,000 years (Halffman et al. 2015). In many ways, salmon are the perfect food source, spending years in the ocean gorging on lipid-rich prey and delivering this bounty to doorsteps tens, hundreds, and even thousands of kilometers from the ocean. Those years spent growing in the ocean not only feed people, but also fuel ecosystems including bears, insects, birds, and even trees (Walsh et al. 2020). How do salmon do it? Salmon are important to ecosystems and people, at least in part, because of their large body size, and this size is a function of their years spent in the ocean before returning to freshwater to spawn. Although other fish species make similar migrations between freshwater and marine ecosystems, few combine the body size, nutritional quality, and accessibility that salmon provide.

One can sit back and envision an early Holocene village, situated by a glacial stream in Alaska, salmon rushing upstream from the ocean, salmon cut into long strips drying on racks just as today. One can imagine those first travelers of the kelp highway (Erlandson et al. 2007), perhaps sustained by salmon all the way down the Pacific coast from Alaska to California. Fast-forward from these scenes of the distant past to the present. Across much of their range, salmon are struggling from a combination of dams, water diversion, land conversion, overharvest, and climate change. But in Alaska, the ecosystems are still relatively pristine – but there are troubling signs of change emerging in the traits of wild salmon.

As researchers, we are interested in the causes and consequences of rapid trait changes in wild populations. Back in 2105, a notable paper was published by a group of researchers from the Alaska Department of Fish and Game (ADF&G) that reported that several Chinook salmon populations from across Alaska are returning from the ocean smaller and younger than they did 30 years ago (Lewis et al. 2015). Agency biologists are not prone to being alarmists, so we knew that something was up.  Meanwhile, local people, including Alaskan Native communities with a deep history of reliance on salmon, were also raising concerns that the old, large salmon of the past were disappearing. We began contacting people in Alaska and beyond, and a research project was born.

We had the idea of launching a working group to compile all the available data on size and age changes in wild salmon populations with information on the causes and consequences of these size changes. Size changes had been documented elsewhere before, but we wanted to know - How consistent are these changes across species and regions? What are the causes of these changes? And what are the consequences for ecosystems and the people who depend on salmon? Addressing these questions was a daunting task. For funding, we approached the State of Alaska’s Salmon and People Project (SASAP), based at the National Center for Ecological Analysis and Synthesis (NCEAS) at UC Santa Barbara. SASAP represented the ideal opportunity to bring together academic, agency, and private partners to explore the consistency, causes, and consequences of salmon size declines across Alaska. One important component of SASAP was funding directed to ADF&G to compile datasets that have been collected over more than 60 years into a single comprehensive database representing age and length measurements on over 12.5 million fish. This large dataset formed the foundation for our analyses and a data resource that is now publicly available for other researchers to use.

The resulting working group was one of the most fun and productive collaborations that we have been involved in. Through a series of working group meetings in California and Alaska, we formulated testable hypotheses, compiled datasets, conducted analyses, discussed results, and synthesized findings into the most complete understanding to date about Alaskan salmon size declines, why they are happening, and why they matter for ecosystems and people. We were (mostly) able to answer our initial questions. Size declines have been surprisingly consistent across species and regions, with rates of decline accelerating since around the year 2000. Overall, size declines are due to declining age rather than slowed growth. Salmon are returning to spawning rivers younger than ever before. A complex variety of factors appear to be involved in causing size declines, with two of the most pervasive being climate and competition with other salmon (including those from hatcheries) in the ocean. Important consequences include reduced fecundity (fewer eggs per female), decreased nutrient delivery to freshwater and riparian ecosystems, declining commercial fishery value, and less food for people reliant on subsistence fishing. We encourage you to read the paper for the full details of our analysis and results.

One of the take-aways from our paper is that the ocean is becoming a riskier place for salmon, at least in part due to climate change. As we look around, the world in general may be riskier than it was in the past. As we write this, wildfires have forced evacuations across California, including the evacuation of several of our working group members, the UC Santa Cruz campus, and much of the surrounding area. These wildfires are perhaps another consequence of the increasing riskiness of a world marked by rapidly changing climate. Salmon are responding to a riskier world by returning to spawn younger and smaller than ever before. Whether we heed the warning signs of these rapid changes will shape the future for salmon and people alike. 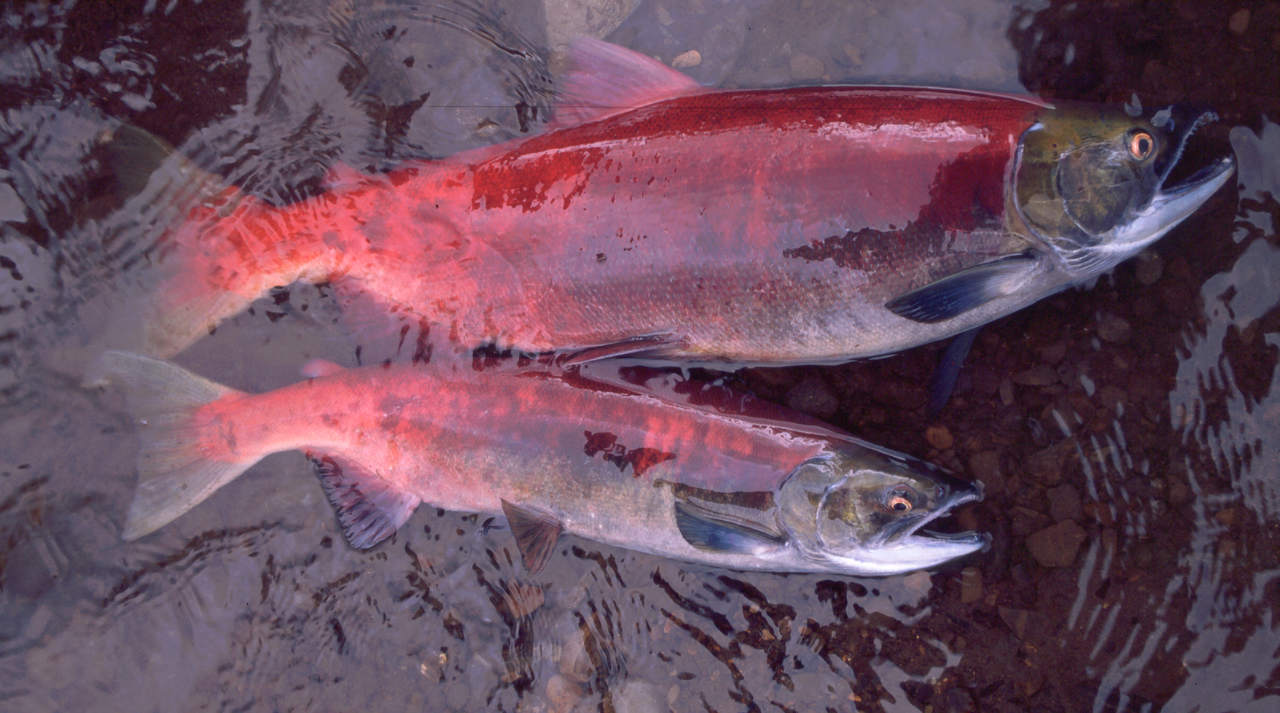 Four species of Pacific salmon in Alaska have gotten smaller over the past 60 years. This decline in size is primarily due to decreasing age, caused by a combination of factors, and may be impacting the ecological role of salmon and their value for commercial and subsistence fisheries.