So similar yet so different: a tale of two fishes

Looks can be deceiving! Using genetics to investigate the mating system and evolutionary history of two similar-looking mangrove killifishes species along the Brazilian coast.

One can find two very similar-looking mangrove killifish species, namely Kryptolebias ocellatus and K. hermaphroditus (Fig. 1), while wandering among mangrove forests in southeast Brazil. Given their syntopic (e.g. co-existing at the same time and place) occurrence and morphological similarities, the first thought that comes to mind is that those two species are closely related, perhaps even sister-species, sharing a similar evolutionary history in the region, right?

Wrong! As many things in life, looks can be deceiving. Although similar-looking, our most recent research has revealed that the often syntopic Kryptolebias ocellatus and K. hermaphroditus reproduce differently and have contrasting evolutionary history along the Brazilian coast.

Let me start with some background information. Kryptolebias is a genus of small-bodied Neotropical killifishes, inhabiting temporary freshwater and mangrove habitats. Within this genus, the mangrove killifishes’ group is composed of three species: K. ocellatus, K. hermaphroditus and K. marmoratus (Fig. 2). The latter two (which are sister-species) represent the only two known cases of vertebrates capable of self-fertilization (selfing). Yes, you read it right. These species are mostly composed by hermaphrodites who are capable of selfing. Although this peculiar reproduction strategy can be advantageous, mainly to assure reproduction in environments where mates are not readily accessible (such as mangroves microhabitats), it also comes with costs. Multi-generational selfing represents an extreme form of inbreeding, rapidly reducing heterozygosity and effective population size, which as a consequence, increase the effects of genetic drift. While genetic variation is expected to be very low in local selfing populations, isolated selfing lines accumulate genetic differences at a broad geographical scale. Therefore, a theoretical prediction is that species undergoing selfing are expected to have deeper levels of genetic structure when compared to outcrossing species, where mating among random individuals tend to result in larger effective population size and reduced genetic drift.

Contrary to plants, most vertebrate animals are dioecious (e.g. individuals are either males or females) and reproduce via outcrossing. Therefore, understanding the effects of different mating systems on the level of genetic structure has lagged behind in animals. To fulfil this research gap, we investigated the mating system of K. ocellatus sampling species across much of its distribution in south and southeast Brazil. We also compared the levels of genetic structure and diversity of K. ocellatus with the selfing and often syntopic, K. hermaphroditus.

A bit of behind the paper scenes. Sampling mangrove killifishes in the wild is, undoubtably, a challenging task. Per se, mangrove habitats are complex and extremely variable, being affected daily by tidal variation. To make matters worse, mangrove killifish species are usually small and cryptic, inhabiting microhabitats which are either very hard to access (e. g. crab burrows) and/or temporary. For this particular study, the 'Kryptoteam' (Fig. 3) had to endure plenty of mosquito bites and a ton of mud in a 4500km-long trip along the Brazilian coast.

Our results indicated that despite being composed by males and hermaphrodites, K. ocellatus is an outcrossing species, with no indication of selfing. For our surprise and contrary to the theoretical predictions, K. ocellatus has shown a deeper level of genetic structure among populations in a narrower geographical area than the one found in the selfing K. hermaphroditus across a much more extensive area of the Brazilian coast. These findings suggest that despite similar-looking and sometimes inhabiting the same mangrove habitats, Kryptolebias ocellatus and K. hermaphroditus reproduce differently and have contrasting evolutionary history along the Brazilian coast. Genetic data indicates that the selfing K. hermaphroditus is most likely a recent coloniser of an mangrove area where K. ocellatus had already been hanging around much earlier.

Mangrove forests are shrinking in size at an unprecedent rate. Despite this eminent conservation issue, knowledge of population dynamics and genetic structure of mangrove forests and their associated organisms remains scarce.  Against this background, our findings highlight the need to understand the factors regulating population structure in a species-specific context, given that even morphologically and ecologically similar species may have remarkably different evolutionary histories even though occupying the same area. These differences, if not taken into account, can lead to misguided conservation policies. So, don't be tricked by your own eyes. Secrets about the biology of  similar-looking species may lay beyond sight.

To find out more about this study, please check out our article published in Heredity. 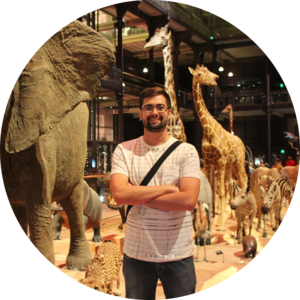 Waldir M Berbel-Filho
about 1 year ago

This study has been  featured at Heredity podcast series. Check this out at: