Ancient organic material found in Antarctic ice suggests that a 2,000 year ‘pause’ in the global rise of atmospheric carbon dioxide 14,600–12,700 years ago may be linked to sea ice feedbacks, with implications for how scientists project the future ability of the Southern Ocean to absorb carbon.

At the southern edge of the Ellsworth Mountains in West Antarctica, a lonely set of exposed knolls sit above the endless plains of ice. Patriot Hills, once the site of a relatively busy runway for Antarctic Logistics and Expeditions (ALE), saw a brief time in the spotlight in 1993 when it featured in the final episode of Pole to Pole with Michael Palin. In 2010 ALE moved their operations 80 km north-west to Union Glacier, and the hills now sit deserted and remote like most of the continent.

Extreme weather is constant all year. Gravity-driven winds, known as ‘katabatics’, are strong enough along the hills’ northern side that they tear ice from the surface of the glacier running the length of Horseshoe Valley. This, in turn, pulls ice up from the bed of the enormous, frozen stream. Instead of flowing past like a normal glacier, the ice alongside Patriot Hills is known as a ‘Blue Ice Area’ (BIA), and wells up to the surface like a bizarre, ultra-slow-motion ocean current. A fascinating glacial oddity, this phenomenon brings ancient ice to the surface, where it is placed within reach of our team.

In our study, published in the June 22nd issue of Nature Geoscience, we tried to determine if there were any interesting stories to learn from trapped microscopic and dissolved organic material, including DNA, brought to the surface within the ice at Patriot Hills.1 Ice cores have for decades been a reliable source of data on past climate and environmental dynamics through the analysis of chemical species and the stable isotopes of water. So, why not examine the trapped organic ‘biomarkers’ (cells, detritus, dissolved organic compounds) as well?

The team conducted weeks long coring campaigns from a remote field camp in December 2012 and January 2015. The site was chosen for its continuity; most blue ice areas fracture and shift as the ice is forced upwards, but Patriot Hills only features two clear, easily identifiable fractures.2 This allowed for the precise extraction of accurately dated samples stretching back 140,000 years.3 Once you cross the hurdle of getting to Antarctica, BIA coring provides an attractive (and cheap!) alternative to more traditional drilling.

Unsurprisingly, there isn’t much organic material (living and dead) in Antarctic ice when compared with other environments, especially once you move away from the coastline. For organic samples, contamination from team members' clothing, skin, and even breath is a major concern – all these things could easily ruin our results. Extra care had to be taken to both avoid contamination and gain maximum information from the limited quantities of biological matter present in the ice.

With our samples carefully shipped off to the numerous contributing laboratories, analysis could begin. Fluorescence spectroscopy at the University of New South Wales provided a means to precisely measure minute amounts of two amino acids, Tryptophan and Tyrosine. Immaculately cleaned samples of bulk ice were analysed for tiny amounts of DNA at the University of Adelaide, unearthing drastic changes in taxa during the last glacial transition. And finally, we used advanced high-throughput imaging technology at Exeter University, called imaging flow cytometry, to generate thousands of images of the microscopic cells and detritus trapped within the ice.

Once analysis began, it became clear that the contents of the ice were telling a truly fascinating story. Around 18,000 years ago, the earth was beginning to emerge from the last ice age. The planet was warming, with increased solar irradiance the driving factor, and rising CO2 levels playing an important role. However, in Antarctica, CO2 levels (and warming) plateaued for 2,000 years, between 14,600 – 12,700 years ago, during a period known as the Antarctic Cold Reversal (ACR). The reasons for this pause are fiercely debated. However, our ice samples show a persistent millennial signal of marine associated (linked with marine organisms and detritus brought into the ice by winds) fluorescent organic compounds that peak during this period.

To understand the causes of such a strong signal we analysed outputs from the independent LOVECLIM transient Earth system model, and identified a coinciding rise in the peak extent of seasonal sea ice. Through comparison of our new blue ice biomarker record, marine sediment cores from the Scotia Sea, and the earth system modelling, we ultimately identify the likely driver of CO2 drawdown (and cause of the ACR) as being a sea ice feedback mechanism that drives marine productivity in the high latitude Southern Ocean (SO). The SO currently accounts for around 40% of the atmospheric carbon absorbed by oceans worldwide. With the planet currently warming, and sea ice projected to diminish in future decades, this finding indicates that the current rate of CO2 uptake by the SO may not be sustainable.

And so, this mammoth project ends! There remain plenty of unanswered questions, and untapped potential for the methods we used. The blue ice remains at Patriot Hills, and the biomarkers trapped within surely have many more stories left to tell.

I would like to thank co-authors Chris Fogwill and Chris Turney for their help in constructing this short piece. I’m a PhD student at Keele University within the Keele Ice Laboratory, studying fluorescent and particulate organic matter in contemporary and ancient Antarctic ice. You can follow me @Organic_Matters on Twitter. Feel free to send me an email at m.r.p.harris@keele.ac.uk. 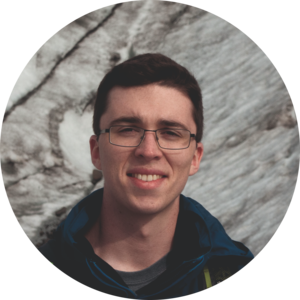