The authors use Bayesian morphological clock modelling and combined trace and body fossil data to examine the evolutionary dynamics of early tetrapodomorphs.

As the year 2018 was coming to closure, I attended a seminar by my future postdoctoral supervisor, Dr. Stephanie Pierce (Harvard University), at the University of Alberta—Stephanie’s alma matter and where I had been conducting my PhD. Stephanie was presenting a seminar on a topic that she is quite intimate with but that, until that point, I was very unfamiliar with: the fish-tetrapod transition and how vertebrates conquered land. As she went on to discuss all the important biomechanical studies, she had been conducting over the years to understand how vertebrates learned to walk on land, I was struck by a peculiar piece of information. The oldest known tetrapod footprints were 15 million years older than the oldest known tetrapod body fossils! To anyone familiar with the fossil record, footprint preservation is not necessarily rare depending on the geological setting of a particular area, but it is definitely rarer than the preservation of hard body parts, such as bones and teeth. After her talk, Stephanie and I discussed at length (over great coffee and pastry) how could this have happened and what were the implications to our understanding of the time of origin of tetrapods?

Not surprisingly, several others have been puzzled by this issue and a few different explanations have been proposed, including what must be the first thing that comes to mind of most paleobiologists—that the tetrapod fossil record is severely biased. Yet, evolutionary techniques developed during the past decade could help us shed some new light onto this and many other questions surrounding the origin of tetrapods. Some of these included the rates of evolution of tetrapodomorphs (tetrapods and their closest fish relatives), and how those could potentially help explain evolutionary processes operating at this critical evolutionary transition in vertebrate history.

One of the key methodological tools that has been extremely useful to understand evolution across deep time scales is the advancement of a technique that we call “morphological clocks”. This technique, derived from evolutionary and epidemiological analyses using molecular data, provides a powerful approach to understand how either extinct or living species are related to each other, their origination times, patterns of diversification, and rates of phenotypic evolution in an integrated fashion. Although there are limits to some of the results one may obtain depending on the kind of data available, several methodological advances on such analyses over the past decade have made it possible to understand the evolution of extinct organisms in a way never previously imagined.

We decided to apply this collection of techniques to this particular problem and developed new ways to critically assess morphological data in the paper just published today in Nature Ecology and Evolution. For instance, how can we objectively partition morphological data and extract evolutionary rates for specific regions of the vertebrae body? Can those rates of evolution tell us anything of the process of natural selection operating on those extinct lineages? Following in the footsteps of recent studies on these topics (e.g., 1 and 2), I proposed new approaches to answer those questions.

One of our big results was obtaining very narrow estimate for the time of origin of tetrapods— at approximately 390 million years ago, close to the age of the oldest known footprints. However, our results suggested that this is not because of poor preservation potential of fossils, but rather by exceptionally low rates of species diversification in tetrapods and their closest relatives. It appears that such low rates of diversification produced so few species living at that period of time that, even given a constant rate of fossil preservation and recovery, there was a very low probability that those few species that were around could be preserved as fossils.

We also learned that the lineage leading to tetrapods was undergoing much faster rates of evolution than all of their close “fish” relatives. Further, we learned that rates of morphological change in the skull during the rise of tetrapods were significantly faster than the rates of change in the rest of their skeleton from the neck down. This may feel counterintuitive because if you think about the fish-tetrapod transition you think of changes from the neck down, such as the development of limbs. But the evolution of limbs is a bit more complicated. It happened for a long stretch of time. And while the whole-body plan is significantly changing faster relative to closely related fish, the skull, during this period, is changing even faster than the postcranium.

But this later finding opens up new questions: if fish living at that time were so well-adapted to live underwater, why did some of them break away from that zone of comfort and evolve several major anatomical changes in a short span of geological time, eventually giving rise to the first limbed vertebrates?

The answer may lie on the faster rates of evolution in the skull compared to the rest of the skeleton during the rise of tetrapods. That is because we see several anatomical innovations in their skull related to feeding and food procurement on land, enabling a transition from a suction-based mode of prey capture (typical of fishes) to biting (more common to tetrapods) and an increase in orbital size and location. By shifting the location of the eyes to the top of the head, tetrapods were better adapted to peer out of water and look for food on land, and to explore and process new food resources not available to their fish relatives. Those changes may have been critical during that timeframe. Shortly after the origin of tetrapods, a mass extinction at the end of the Devonian (at 360 million years ago) wiped out most species of marine animals, including several of the closest fish relatives to tetrapods. By being able to explore additional food resources on land, perhaps that provided tetrapods with a key advantage over their fish relatives, allowing them to survive across that mass extinction?

It would still take several million years, however, for tetrapods to truly radiate into several species and major subgroups that we are more familiar with, such as the ancestors of modern amphibians and amniotes (including mammals, reptiles, and birds). Why such a long gap between the origin of the group with key evolutionary innovations and their taxonomic success as a lineage? This is a pattern that we have been finding with other lineages of vertebrates in recent years across different timescales (including a recent study of ours last year). Answering this question is now one of my main research interests, which will definitely require considerably more time, analyses, and pastries. 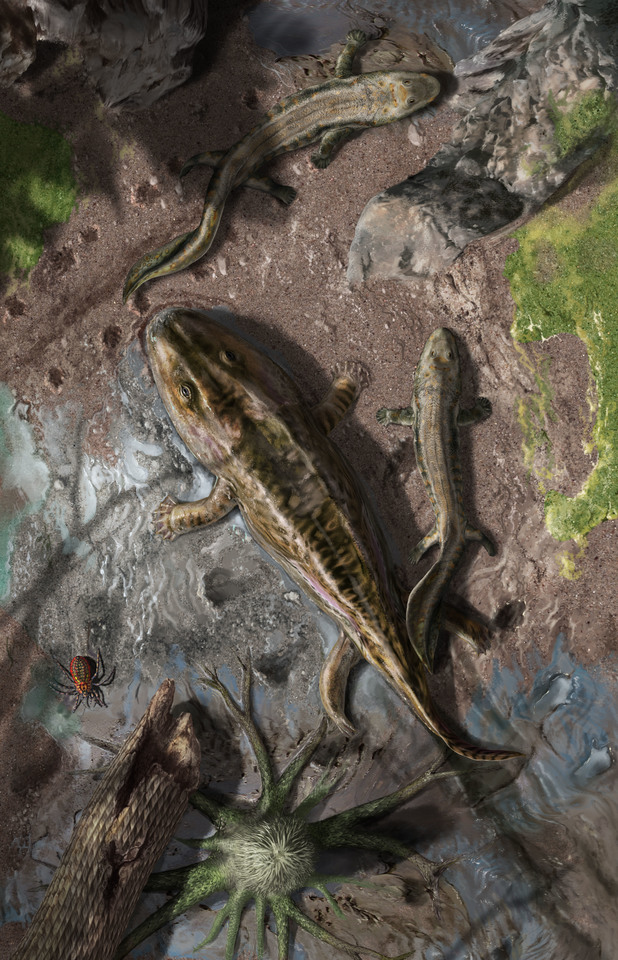