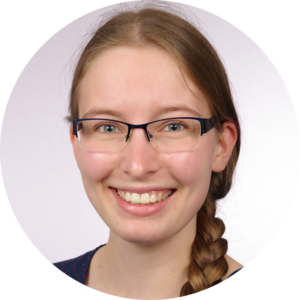 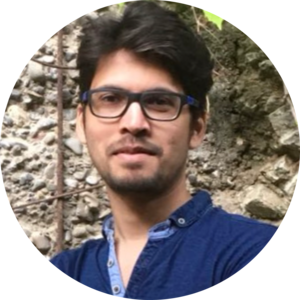 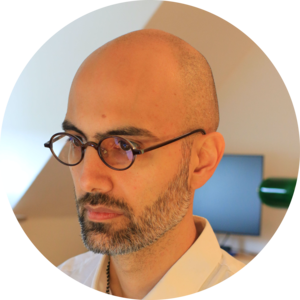 The ecological niche summarises how certain biotic and abiotic environmental conditions affect an organism’s survival and reproduction. A widely-held view commonly portrayed in ecological textbooks is that biotic interactions (i.e. the realised niche) limit the range of conditions, in which an organism could thrive otherwise (i.e. the fundamental niche). However, it remained generally unclear whether and to which extent ecological interactions between two organisms can also expand the niche space of the interacting partners. We investigated whether obligate metabolic relationships between two bacterial genotypes expand or contract the niche space of two interacting individuals. 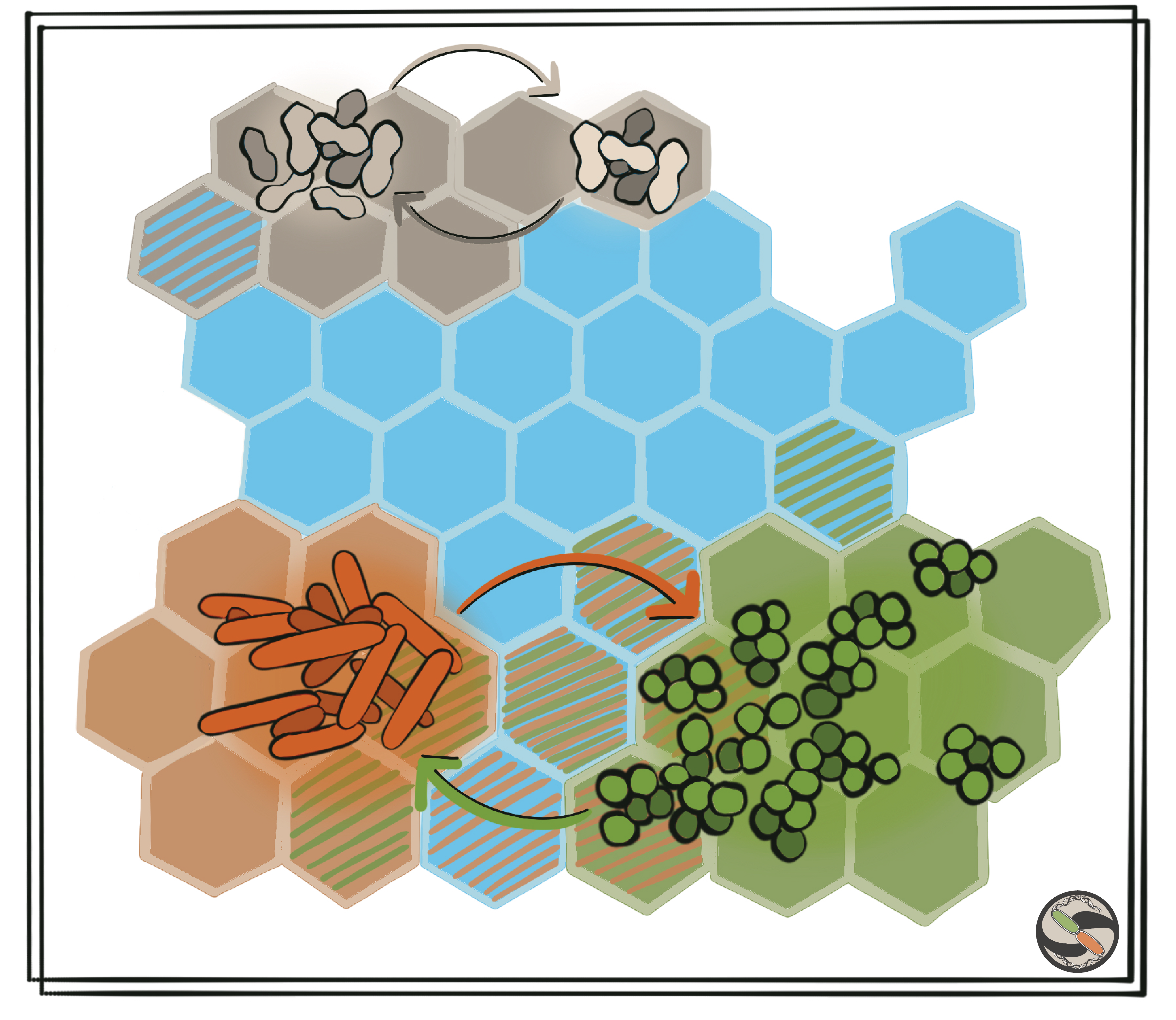 Metabolic cross-feeding between bacterial species viewed as a strategy-based board game, where the goal is to maximise resource use (hexagons). Synergistic interactions among more closely related individuals (above) result in access to fewer resource fields than ones between two more distantly related species (below). This game of expansion and contraction between bacteria can help us understand how metabolic interactions shape the ability of a bacterial community to utilise resources, thus also affecting its distribution in space and time (Image: Shraddha Shitut, Twitter: @she_toot).

I joined the group of Christian Kost at Osnabrück University in late summer 2019 for my bachelor’s thesis. During a first meeting with Christian regarding a possible topic for my thesis, he suggested a project within the scope of the doctoral thesis of Samir Giri. At that time, Samir’s work mainly focussed on investigating ecological and evolutionary drivers of metabolic cross-feeding and division of labour in bacterial communities. Apparently, the project’s original idea had been around for quite some time, and it was just waiting for me to arrive and start to realise it. The basic question I should address was: Do obligate metabolic interactions between two bacterial species affect their ability to utilise certain carbon sources? To test this, it was planned to coculture pairs of bacterial strains that belonged to different species and which were unable to produce a certain amino acid (so-called “auxotrophs”). Both strains could only grow when reciprocally exchanging the amino acids they needed to grow with each other. Cultivating many of those pairs in a large number of different carbon sources and comparing their ability to grow in coculture to their capacity to grow in an amino-acid supplemented monoculture would allow us to test the above question. I was immediately intrigued by the project. Soon afterwards, I started to plan the experiment together with Samir, Christian and Leonardo Oña, a postdoc in the group.

Together, we evaluated and discussed the details of the project, namely which strains to use, in which medium to grow them, how to inoculate the strains, and how to quantify growth. We decided to use commercially available BiOLOG EcoPlates, as they would allow us to simultaneously test 31 different carbon sources under easily reproducible conditions. Analysing the growth of cocultures in these different environments would tell us whether synergistic interactions between two bacterial strains would decrease or increase the number of usable carbon sources. The mutant strains included in the experiments had been previously constructed by Samir and, for one of the five species tested, by Maximilian Kreienbaum and Kai Thormann from the University of Gießen.

However, before the large-scale experiment could be started, some preliminary tests had to be performed. First, the auxotrophy of the strains had to be confirmed by growing them in media supplied with either no amino acids, the amino acid the respective strain was unable to produce by itself, or the other 19 essential amino acids. Additionally, it was important to explore whether the strains, which had not previously been grown in coculture, were able to grow together in unsupplemented medium in the first place. For this, some selected strains were cocultured in a medium containing N-acetyl-glucosamine as the sole carbon source, as all bacterial species were able to grow in this medium. After these experiments had been finished with satisfying results, it was time for the main part of the project. All experiments up to this point had mainly been performed by me. However, the planned large-scale experiment required more hands and quite a lot of time, including the set-up of plates and quantification of growth, so I teamed up with Samir for this part. In the project, a total of 108 coculture combinations and an additional 39 monocultures (34 auxotrophs and 5 wild types) were inoculated in triplicates in the BiOLOG plates. This resulted in no less than 147 plates to be used in our experiment. 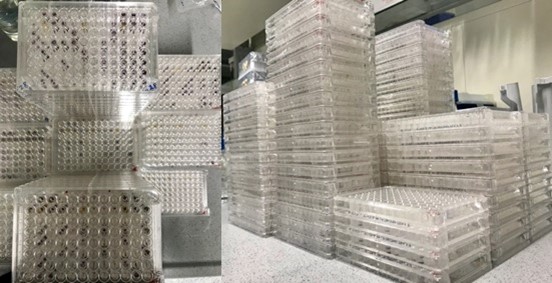 After obtaining the measurements, the next step was analysing the resulting data. This task was done by Leonardo, who was responsible for systematically analysing the dataset and further developing the project. Given that analysing and interpreting the data required some extra time, I wrote my thesis with a preliminary subset of the data and had successfully finished and submitted my thesis, which already contained the seed of what ultimately resulted in our paper.

In nature, bacteria often need other bacterial strains to provide them with vital nutrients. We found that cocultures of two interdependent bacterial strains were commonly able to exploit new carbon sources they were not able to use under monoculture conditions. Interestingly, this effect was stronger when two more distantly related species interacted with each other as compared to interactions between two close relatives. Obligate synergistic interactions particularly provided specialised strains, which when alone could only use a small number of carbon sources, with the possibility to use new food sources. In contrast, the niche space of generalists was rather reduced. Obviously, there are limitations to our study, such as the number of species or growth conditions tested or the fact that we performed our experiments in spatially unstructured environments. Nevertheless, we believe that the obtained results revealed a previously unknown mechanism of how obligate cross-feeding interactions can benefit the strains involved. Thus, our work challenges the widely-held view of classical niche theory that the realised niche is always a subset of an organism’s fundamental niche. In contrast, our results show that obligate cross-feeding interactions can expand the size of the realised niche beyond the limits of the fundamental niche. Similar mechanisms may operate in other, mutually beneficial interactions, such as between plants and their nitrogen-fixing bacteria or symbiotic microorganisms and their host. Overall, our findings can help explain the widespread occurrence of this type of interaction in nature.