Prof. Xiaoxue Wang is marine microbiologist. Her research focuses on exploring the function of prophages and toxin-antitoxin systems in the ocean.
Xiaoxue Wang
Professor, Chinese Academy of Sciences
Follow
Liked by Evelina Satkevic and 2 others

Competition among species in the coral microbiome has important outcomes in terms of coral health, but little is known about the mechanisms allowing pathogens to gain a competitive advantage. Here the authors show that the pathogen Vibrio coralliilyticus outcompetes commensal bacteria by inducing pr…

The tropical ocean environment is changing at an unprecedented rate, with warming and heatwaves having an obvious impact on coral reefs. Coral reefs are important habitats for biodiversity and are sensitive to temperature increases, which can cause coral bleaching and death. When we surveyed coral reefs in the South China Sea, we found Galaxea fascicularis (also known as Galaxy Coral) is dominant near Hannan Island and the Xi Sha Islands. The Galaxy Coral is a massive reef-building coral and often found in inshore fringing reefs (Figure 1). The large polyps resemble a star burst and are tipped in white, giving it a sparkling, crystal-like appearance. Their lightweight skeleton consists of groupings of branching tubular corallites connected together by tiny little bumpy plates. The outermost parts are covered in living coral tissue (Figures 1 & 2).

Figure 1. The large polyps of the Galaxea fascicularis (also known as Galaxy Coral) resemble a star burst tipped in white

The deadly stony coral tissue loss disease (SCTLD) has been reported to be associated with the coral pathogen. Six years ago, we started to dissect the role of commensal bacteria in the Galaxy Coral.  Luckily for us, the adult Galaxy Coral has large corallites, and the primary septum became visible due to contraction of the tentacles, when removed from sea water. These special features allowed us to establish noninvasive sampling and injection-based infection assays for the study of interactions of coral microbes inhabiting the gastric cavity. More importantly, different polyps from the same coral colony can be used for parallel assays to ensure the same coral genetic background is used during experimentation. This is important since coral is a complicated holobiont, harboring an array of life forms at different scales, including coral cells, zooxanthellae, and the associated bacteria, Archaea, and viruses (Figure 2). Our goal was to explore the importance of the microbial interactions in corals without the inference of other biological factors in this complicated network.

Healthy or unhealthy coral colonies were collected from the South China Sea (Figure 2). Gastric fluids were collected from the cavity between the primary septum and the secondary septum by using a syringe with a long needle; a noninvasive sampling method that we established previously (1). These fluid samples were plated, and the colonies were selected and identified one by one. Unexpectedly, although rare, the pathogen Vibrio coralliilyticus was also found in the gastric fluids of Galaxy Corals. When infected with this pathogen, Galaxy colonies showed serious tissue loss under heat stress (1).

Figure 2. Healthy or unhealthy Galaxy coral and the members of the holobiont of Galaxy coral

In our recent work (2), we uncovered a novel interplay between this pathogen and the other coral commensal bacteria, and the outcome of this interaction determines coral health. We identified a key enzyme, LodA (L-lysine-epsilon-oxidase), in this coral pathogen. LodA oxidizes L-lysine and generates hydrogen peroxide, which helps to eliminate a non-pathogenic Vibrio species that cohabitates in the coral, by inducing a prophage hidden in its genome. Additionally, this coral pathogen also uses LodA to outcompete other coral symbiotic/associated bacteria, like Endozoicomonas spp. through LodA-dependent prophage induction in wild corals. Thus, we demonstrated that the ecological relevance of LodA, which was previously associated with antimicrobial activities (3,4), is triggering prophage induction. It is well known that bacterial hosts can increase their fitness through the acquisition of prophages when nutrients are scarce; however, the risk is that this hidden prophage can be manipulated by competitors and can be converted into a bomb which kills the host bacterial cells. The coral pathogen activates this hidden bomb in the native microbiota and eliminates the competitors, thus colonizing the corals and eventually killing the Galaxy corals.

Since lysogeny is prevalent in the human gut and in the murine gut, we also wanted to know whether this interplay could occur in other microbiomes. We found the lodA is present in environmentally important taxa (e.g., Proteobacteria, Bacteroidetes, Cyanobacteria and Acidobacteria), which suggests that it might be a common strategy for competition among microbes co-habiting the same ecological niche or eukaryotic host.

In summary, our work demonstrates that the coral pathogen V. coralliilyticus invades the coral G. fascicularis by competitive killing of resident strains via the generation of hydrogen peroxide to cause SCTLD. Clearly, pathogens have evolved many strategies to evade host defenses to colonize the gastric cavity of wild corals, and our results can now be taken into account for coral reef conservation. Hence, our work provides a new insight into coral reef homeostasis and may have ecological significance in other holobiont systems.

4   Lucas-Elio, P., Gomez, D., Solano, F. & Sanchez-Amat, A. The antimicrobial activity of marinocine, synthesized by Marinomonas mediterranea, is due to hydrogen peroxide generated by its lysine oxidase activity. J. Bacteriol. 188, 2493-2501 (2006).

I am a marine microbiologist. My research focuses on exploring the role of  prophages and toxin-antitoxin systems in marine microorganisms. 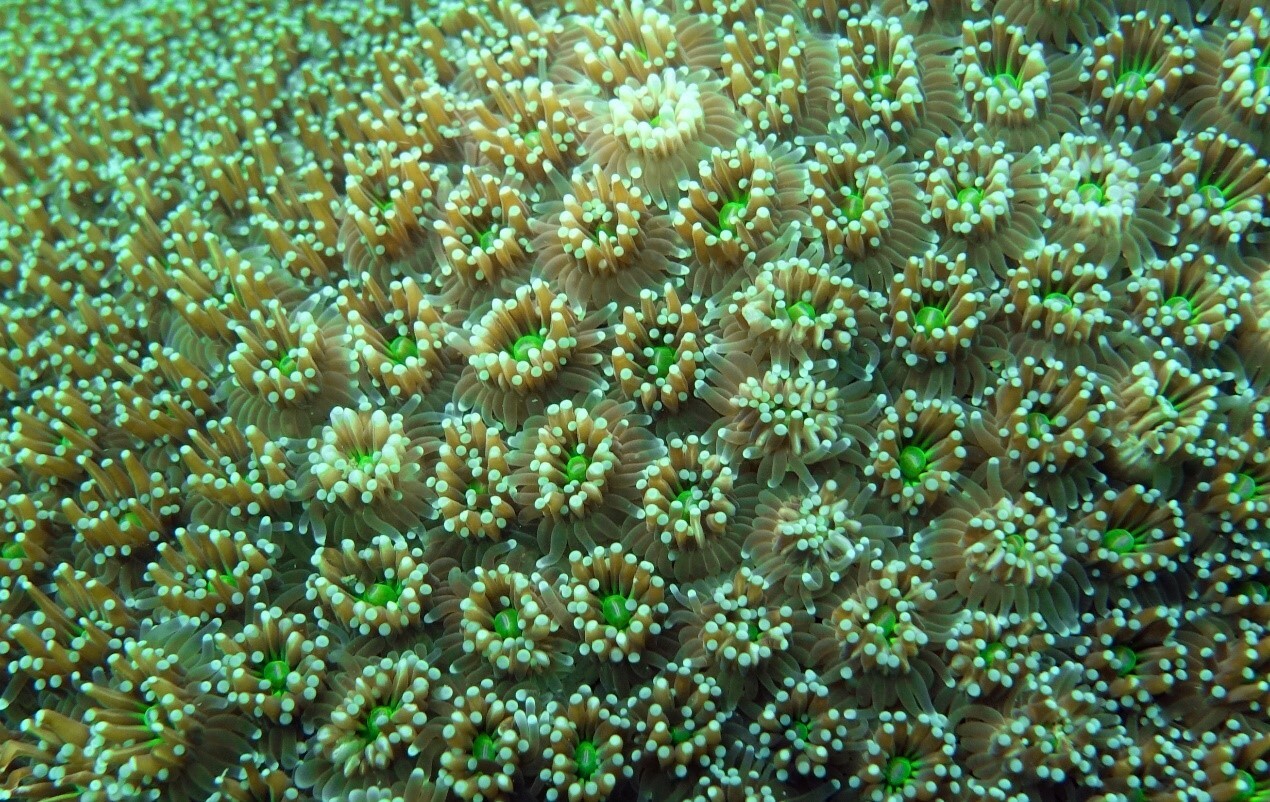 Prof. Xiaoxue Wang is marine microbiologist. Her research focuses on exploring the function of prophages and toxin-antitoxin systems in the ocean.