Testing for environment-specific maternal effects with a seed beetle

Inheritance is not only about genes. Parents can influence their offspring in multiple ways. Maternal effects represent a particularly diverse (be it genetic or non-genetic) route on how mothers imprint on their progeny beyond the genes they pass on. Sometimes conceptualised as a form of trans-generational plasticity, maternal effects are very seldom considered plastic themselves.

In a previous study, colleagues from our lab focused on the impact of inbreeding on performance in two different environments using a multi-generational experiment with a species of live-bearing fish, the mosquitofish (Gambusia holbrooki) 1. Among other interesting findings, they discovered that the magnitude of maternal effects differed depending on the environments for two of the life-history traits they measured.

This work motivated us to focus more precisely on environment-specific maternal effects. As fresh arrivals to the Australian National University, we (Milan and Pierre) were mostly experienced with the behavioural and evolutionary ecology of fish. Due to the 6-month time-constraint of our Endeavour fellowships, we were lucky to get our hands on a prolific study organism with rapid life-cycle and no parental care, a seed beetle, Callosobruchus maculatus. We selected a contrast between familiar and novel host species seeds to rear their offspring and test for the environment-specific maternal effects.

The quantitative genetic experiment was really exciting and required intensive bouts of effort. Within one week, we mated 89 families of one male and four females to obtain half- and full-sibling offspring from both hosts, thus aiming for over seven thousand offspring. After mating, we assessed host preference of future beetle mothers and then forced them to lay eggs on each of the two host species. The fate of individual offspring completely depends on maternal oviposition choice in C. maculatus because larvae cannot move between seeds until after pupation.

The parents being nicely predictable and well-behaved (see Figure 1 for illustration), the seed beetle offspring showed us some surprising patterns. We expected the novel host will be a challenging environment to the offspring. They, however, fared similarly or even better when compared with offspring reared in the host familiar to the population. We then expected relatively similar magnitude of maternal effects as well. To our disappointment, we could not detect maternal effects in any of the studied trait above the error of our estimate. So, our beetle offspring did not only fail to express an MxE interaction, there were also no apparent maternal effects at all (despite the previous studies of C. maculatus 2,3).

While the results were somewhat underwhelming, we believe that our experiment can serve as a case study testing for the interaction between maternal effects and offspring environment. We hope to motivate researchers into exploring potential Maternal-by-Environment interactions in other study systems. Not only ignoring maternal effects or MxE may inflate additive genetic variance or GxE, but knowing more about the plasticity of maternal effects will help us better understand inheritance, trans-generational plasticity, and the evolutionary consequences associated with those phenomena.

full-time researcher, Institute of Vertebrate Biology of the Czech Academy of Sciences 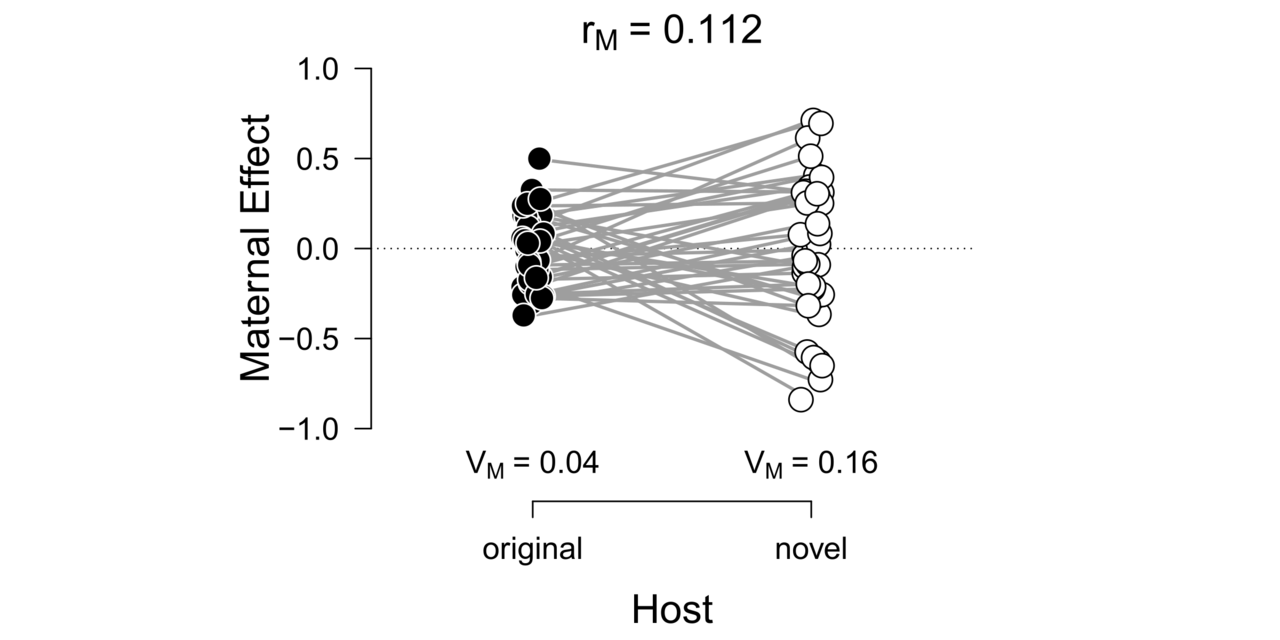 Testing for environment-specific maternal effects with a seed beetle