Ray-finned fish have some of the most complex feeding systems in the vertebrate world. But how did this complexity originate and persist? The answer appears to center around evolutionary constraints, which are universal in biology.
Andrew Conith
Postdoctoral Researcher, University of Massachusetts Amherst
Follow
Like Liked by Evelina Satkevic
0

Modular, rather than integrated systems are classically thought to allow functional diversity to evolve rapidly. A study of cichlid fish shows integration between divergent jaw systems at the phylogenetic, population, and genetic scales, suggesting integration can and does facilitate rapid, coordina…

One of my favorite movie franchises of all time is Alien. The world inhabited by the main character Ripley, feels real because the Xenomorph feels real. Indeed, the rapid metamorphosis from a small parasite to a tall arthropod-like organism mimics the life cycles of many invertebrates found here on Earth. Another anatomical feature of the Xenomorph that always intrigued me was the second set of jaws hiding in the throat. While I initially thought these jaws were fantastical, it wasn’t until later that I realized that these too, were based on organisms found on Earth – ray-finned fish.

Ray-finned fish exhibit two sets of jaws; oral jaws (like ours), and pharyngeal jaws (like the Xenomorph), which are typically used in feeding. In fish, the pharyngeal jaws were coopted from the posterior gill arch, and through time became specialized for feeding with the development of teeth and musculature that permitted the arch to move and process prey as it did so. By evolving two sets of jaws, fish have the capacity to separate prey capture mechanisms from prey processing; the oral jaws can become specialized for catching prey, and once inside the mouth, the prey can be crushed-grinded-sliced by the pharyngeal jaws (Figure 1). This led many early ichthyologists to theorize that if the jaws are functionally decoupled, in that the brain can separately control each jaw, then the jaws are likely shaped by very different genes and can evolve independently.

Genetically and evolutionarily decoupling the jaw system would allow natural selection to act on each pair of jaws independently, generating unique combinations of oral and pharyngeal jaws adapted to a variety of diets. However, these combinations of different jaw shapes are not limitless. Constraints acting at the genetic, developmental, and evolutionary levels will ultimately determine which combinations are possible (Figure 2). Evolutionary constraints acting to limit or facilitate the action of natural selection is not a new concept. Darwin, while seeking to understand correlated growth, used constraints to explain how suites of traits may change together as a consequence of selection acting on an unrelated trait.

Constraints in evolution are commonplace and help to explain why an organism such as the Xenomorph, or other mythical creatures such as Pegasus cannot exist given what we know about development. A Xenomorph metamorphosing into an 8ft tall organism in a matter of hours with acid in its circulatory system is not biologically possible, nor is it possible for Pegasus, a tetrapod, to develop an extra set of limbs. Development and genetics set the bounds for what is possible in evolution, and these constraints are universal.

Biologists often get very excited when we witness a constraint being broken. This is a rare occurrence, and while it is unlikely to fundamentally change the body plan, small developmental or genetic changes to important regulatory networks could impact the phenotype in a variety of ways. In cichlids, a group of ray finned fish with a relatively complex oral and pharyngeal jaw system, the classical thinking was that, because the jaws were functionally decoupled, they were also decoupled at the genetic and evolutionary levels (Figure 3). Cichlids had broken genetic and developmental constraints, permitting independent regulation of each jaw. Recent work by our lab published in Nature Communications has demonstrated that the story is more complex.

Using African cichlids primarily from the Rift Valley lakes we sought to document the degree of genetic and evolutionary association between the jaw complexes to ask the question “how correlated are the jaws of cichlids at multiple levels of biological organization?” The answer was “highly correlated, for the most part.” We measured the jaws in a suite of cichlid species from across Africa and found strong correlation between jaws (Figure 4). At one end of the spectrum cichlids paired long, thin oral jaws with long, shallow pharyngeal jaws, at the other end wide, short oral jaws were paired with deep, short pharyngeal jaws. However, a handful of cichlid species appeared to deviate from this pattern, shuffling the typically observed oral jaw – pharyngeal jaw pairings.

After observing jaw association at the evolutionary levels, we decided to investigate jaw association at the genetic levels. We crossed a cichlid with a more typical association pattern (Tropheops) with a cichlid with a more unusual association pattern (Labeotropheus) and built a genetic map based on the hybrids. We measured both jaws in the hybrids and used an analysis that detected regions on the genome that appear correlated with a jaw’s phenotype. We found that the genomic regions for the oral and pharyngeal jaw overlapped, indicative of pleiotropy. When we looked more closely at the region we found a candidate gene, smad7, a gene responsible for inhibiting bone formation that could be responsible for driving coordinated change between jaws. When we assayed the expression of smad7 in the jaws of certain cichlids we found a correlation, but this correlation was strongest in Tropheops and a closely related cichlid Maylandia, while there was no correlation in Labeotropheus, mirroring results observed at the evolutionary levels. Labeotropheus has potentially evolved a mechanism to modulate the expression of smad7 between the LOJ and LPJ separately, and could represent a means to decouple jaw shape variation.

In coupling their jaws, cichlids are likely limiting the amount of change that can accrue between jaws, however, this constraint may promote rapid shifts in jaw shapes and feeding ecology. In a dynamic and fluctuating environment, like the East African Rift Valley, where Lake Malawi is located, this is likely to be advantage.

You can find the full study here: The cichlid oral and pharyngeal jaws are evolutionarily and genetically coupled. 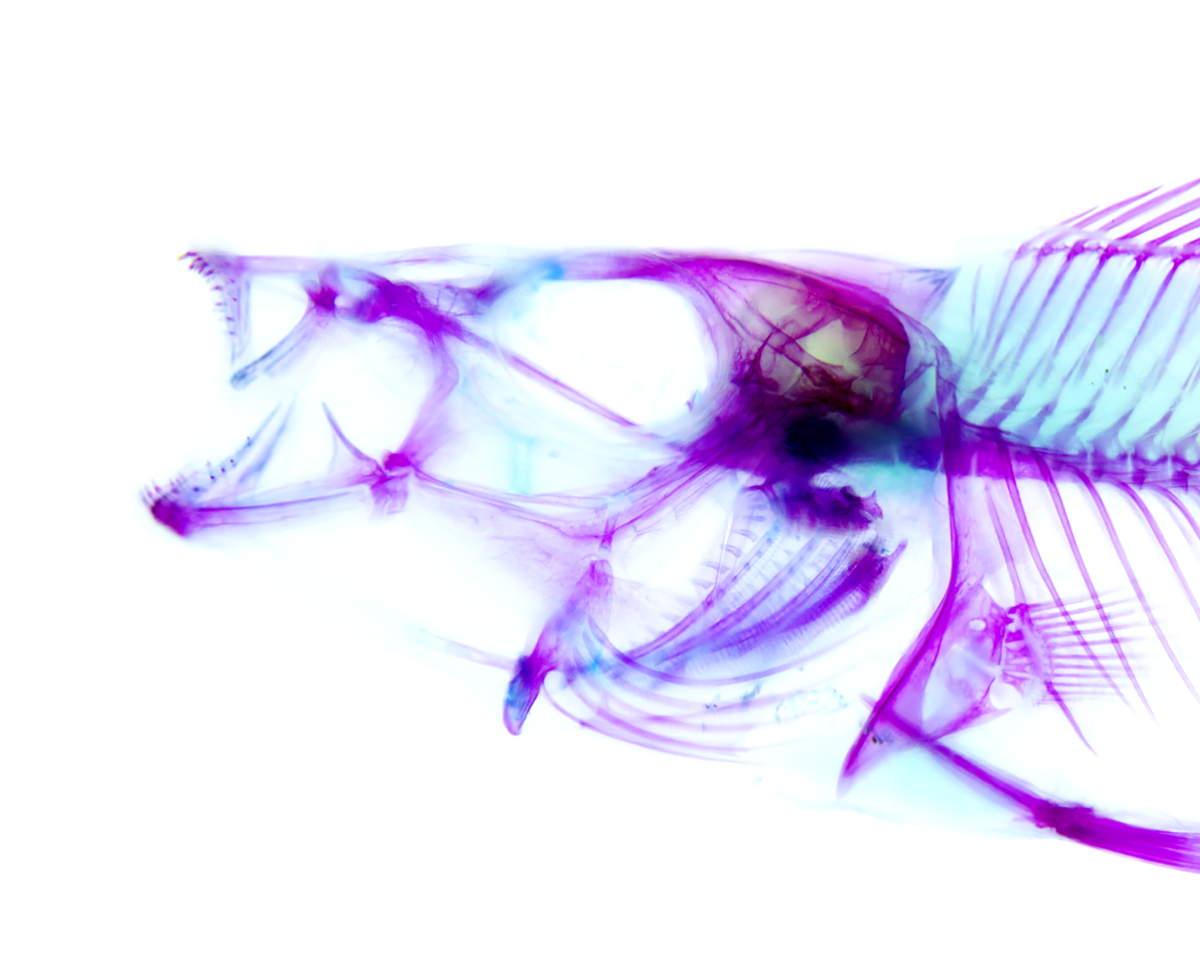 Ray-finned fish have some of the most complex feeding systems in the vertebrate world. But how did this complexity originate and persist? The answer appears to center around evolutionary constraints, which are universal in biology.