Raising a child takes a village, but some villages are mean. We reveal that hormones called androgens are the key to cooperative breeding in meerkats. Androgens enable the dominant female to aggressively keep her subordinates in line and to give her daughters a competitive edge in life.
Caroline Shearer, Charli Davies & Joseph Feldblum
3 contributors
Like Be the first to like this
0

’In some mammals, matriarchal status can be conferred with androgens. Here, the authors identify effects of androgens that implicate androgen-mediated aggression in female sexual selection in meerkats and intergenerational transmission of masculinised phenotypes in the evolution of meerkat cooperati…

It may take a village to raise a child, but not all village life is peaceful. For mothers and pups to survive in the harsh Kalahari Desert, where resources are scarce, multiple meerkats must help defend territories and care for young. As such, meerkats are obligate cooperative breeders. The dominant female and her mate are often the only clan members to successfully reproduce, such that most individuals help raise offspring that are not their own. Subordinate females are not incapable of reproduction; they often get pregnant, but the dominant female will frequently evict pregnant subordinates - a highly stressful event that often leads to abortion - or simply kill their pups. The vast majority of surviving pups are born to the dominant female.

Many subordinates never reach the dominant breeder position; striking out on one’s own to establish a new clan is risky business. So what is responsible for the dominant breeder’s success and the inability of subordinate females to successfully challenge her leadership? One possible answer could lie in a group of hormones called androgens (including testosterone). Although androgen-linked aggression has received much attention for its role in male competition, less is known about its role in female competition. In meerkats, females, particularly if dominant, have high androgen concentrations that even surpass those of males. Our recently published study reveals that these raging hormones are the key to their success.

Fig. 1: Meerkats in the Kalahari Desert (Photo by Charli Davies)

To test the role of androgens in females, we traveled to the Kuruman River Reserve in the South African Kalahari Desert. Here, we studied the charismatic population of meerkats made famous by the Animal Planet docuseries Meerkat Manor. After spending countless hours watching clan dynamics, recording the detailed behaviour of pregnant females, and collecting hundreds of biological samples, we found that androgen concentrations in females increased across pregnancy. The dominant female (who had the greatest increase in androgens) also became more aggressive and short-tempered as her pregnancy progressed, while her pregnant subordinate counterparts - likely fearing eviction - were more submissive. Although the coordinated timing between hormones and behaviour was highly suggestive, the question remained - was this correlation or causation of female reproductive competition?

We next took an experimental approach to address this question, administering flutamide - a drug that blocks the effects of androgens - to 10 dominant females in late pregnancy. Compared to controls, treated females became noticeably less aggressive. A form of social network analysis showed that they also became less “popular” in their group. In other words, they were behaving like subordinate females!

What’s more, the subordinate females could tell that something was off with their “queen”. Concurrently pregnant subordinates became more aggressive and less submissive when their dominant female was treated. Flutamide treatment reduced the dominant female’s aggression and, indirectly, increased the aggression of subordinate females. Androgens thus underlie the dominance hierarchy and intrasexual competition of female meerkats.

Fig. 2: Pregnant female dominant (left) and subordinate (middle) meerkats and a pup (right) in the Kalahari (Photos by Charli Davies)

But do these immediate changes in the treated mothers have any long-term effects on daughters’ aggression?

Although cute, meerkat pups are surprisingly aggressive - their incessant begging is interspersed with attacks, growls, and bites. This pattern differs from most other mammals, who aren’t aggressive during infancy (imagine human babies fighting constantly).

Even though all pups are raised collectively, not all young meerkats are created equal. Aggressive, dominant mothers produced aggressive offspring, whereas subordinate mothers produced more docile offspring. When we experimentally blocked the action of androgens in dominant females during late pregnancy, their offspring showed the same docile phenotype as the offspring born to subordinate mothers. This experimental manipulation confirms that androgens coursing through females during pregnancy also reach the litter in their womb, but create a social inequity: the fetal daughters of dominant mothers experience a greater bump in androgens, ultimately giving them a competitive edge.

Fig. 3: Meerkats are aggressive - especially when it comes down to food (Photos by Charli Davies)

The secret is out: meerkat villages have mean streets. By revealing the physiological mechanisms of female dominance, we expose the “dark side” of cooperative breeding in meerkat society: helping is aggressively enforced across generations of matriarchs. Androgens allow dominant females to keep subordinates in line and also give ferocious pups a headstart in life. By facilitating aggression, androgens may help females attain breeding status in adulthood, driving their differences in reproductive success. 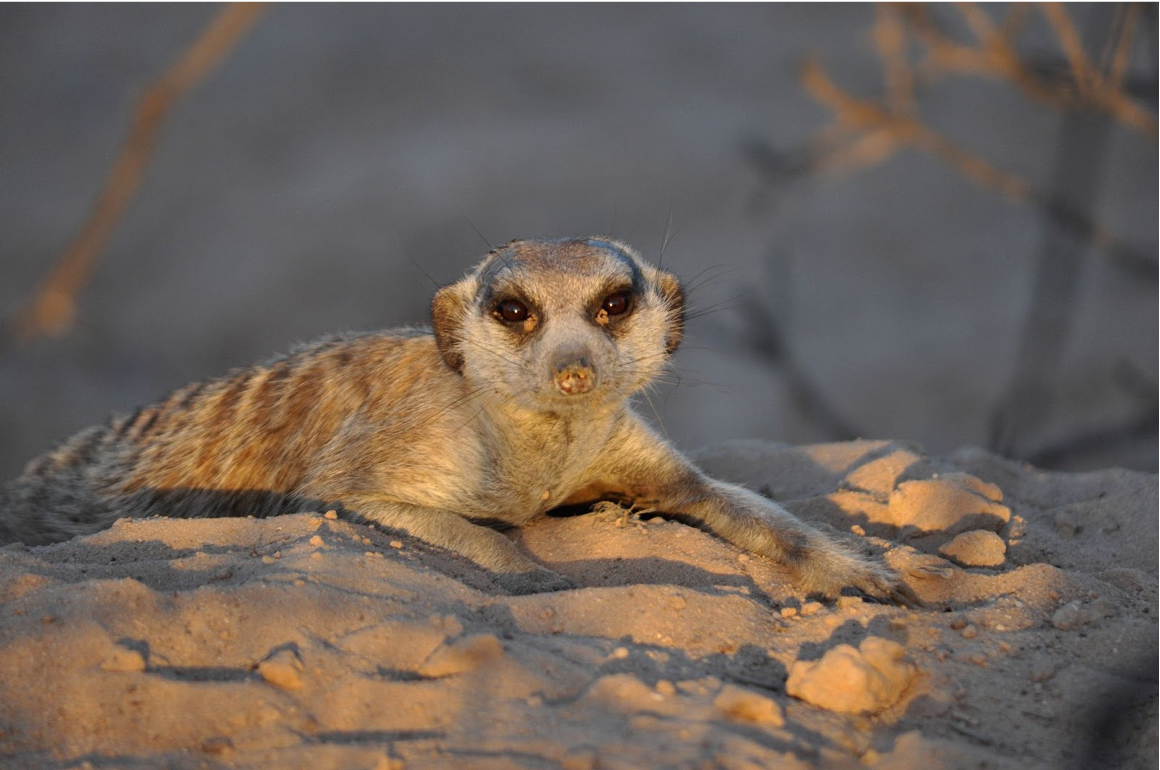 Raising a child takes a village, but some villages are mean. We reveal that hormones called androgens are the key to cooperative breeding in meerkats. Androgens enable the dominant female to aggressively keep her subordinates in line and to give her daughters a competitive edge in life.