Egg-laying and live-bearing are fundamentally different reproductive strategies. A rare phenomenon that is seemingly out of nature's cabinet of curiosities - hybrids of egg-laying and live-bearing lizards - allowed us to illuminate the genetic architecture of the two reproductive modes.
Hans Recknagel
Postdoctoral Researcher, University of Ljubljana
Follow
Like Liked by Evelina Satkevic

Using natural hybrids between oviparous and viviparous common lizards, the authors describe the genetic architecture of parity mode and conduct a comparative analysis of genes associated with viviparity in mammals, squamates and fish.

Unravelling the genetic code of phenotypically complex adaptations is one of the major challenges for biologists of our time. Relatively simple phenotypes controlled by one or a few genes have received considerable attention, but the majority of the biodiversity we observe today was propelled by major evolutionary transitions, involving phenotypically complex traits with their genetic basis remaining a mystery. These key adaptations, also referred to as ‘innovations’, have often opened up novel ecological niches and resulted in subsequent diversification. Examples include the transition from water to land, or from land to air. Such major transitions have often occurred multiple times throughout evolutionary history and resulted in convergent phenotypic evolution (think of pterodactyls, bats, and birds).

The evolution from egg-laying (oviparity) to live-bearing (viviparity) can be considered such a major transition. During my undergraduate studies I was surprised to learn that this very transition occurred in evolutionary recent times, in a lizard species that I had so far considered as ‘boring’: small, inconspicuous, mostly brown, widespread, relatively slow; the common lizard. Even the name suggests nothing special. However, this is far from being true because some lineages in this species are viviparous while others are oviparous, which is the ancestral state for lacertids lizards and also for vertebrates. In 2008 Austrian herpetologist Werner Mayer and his team reported that oviparous and viviparous individuals of this species may even hybridize in nature! As an evolutionary geneticist, understanding the genetics of complex phenotypes is like winning Olympic gold. While not exactly impossible, in practice there are (too) many limitations. Excitingly, for understanding the genetics of parity mode, these limitations could be overcome by studying the natural hybridization events in oviparous and viviparous common lizards. This was the starting point of my PhD, maybe a bit naïve and optimistic, but with a supervisor and team that fully supported the idea of trying this.

The first main challenge was to find and identify enough hybrid individuals that would allow genetic mapping. It was suggested that F1 hybrids lay eggs with a thin eggshell, with offspring taking about half the number of days compared to purely oviparous common lizards for emerging from the thin shells. With only two hybrid individuals reported so far, it seemed at least difficult to catch a sufficient number of hybrid individuals to inform genomic analysis. This also meant that a substantial amount of fieldwork in the in Carinthian Alps of Austria was necessary, something that further attracted me to this project. In 2014, in the early stages of my PhD project, an expedition that took almost 4 months ended with success: with the help of an undergraduate student we were able to catch enough hybrid females that justified continuing the project in the following years.

Fieldwork was not always easy; days of more than 30°C under full sunshine and no lizards to be seen were not that unusual. Sometimes extremely rainy weather for weeks meant being confined to the tent, just taking care of the pregnant females and their egg clutches. However, observing freshly hatched or born young made it worthwhile, and finding hybrid clutches was always a highlight. We lived at a campsite and we were the stars for the nature-enthusiastic children on their holidays. Everyone wanted to see lizard eggs and freshly hatched ones! A few offered their help and came along to the field, some with promising abilities in catching lizards. Locals had also not heard about the phenomenon of hybridizing egg-layers and live-bearers, and soon the local newspapers picked up on this and a primary school class came by to learn about these lizards. The contact with locals and guests on the campsite was very rewarding; everyone immediately understood that this was interesting and great to study, and our fundamental research was fully appreciated.

We have been returning annually to the field site since, with new questions, more students and researchers, and a bigger team. By the end of my PhD I had spent more than a full year in the Alps on a campsite, living in a small tent but with great company and research. Back in the lab, we sequenced every single female that was phenotyped (eggshell traits and gestation time) for parity mode. In the course of this research we developed a high-quality reference genome for the common lizard, in part built with linkage map data inferred from our collected clutches. We teamed up with eggshell and embryology experts in veterinary medicine to get a more sophisticated insight to the parity mode phenotypes. Using high resolution microscopy and chemical analysis we studied the composition and thickness of the eggshells and the membrane that surrounds the embryo.

Our results showed that parity mode is controlled by many genetic regions and genes in common lizards. The number and type of genes differs between forming an eggshell and how long an embryo develops in the uterus (gestation time), with gestation time involving more genes, and many of those located on the sex chromosome. The most enriched pathways for genes associated with eggshell and gestation time were related to tissue remodeling and the immune system. These pathways have been previously suspected to be functionally important for parity mode evolution. One of the most strongly implicated candidate genes was PGRMC1, a progesterone-binding membrane receptor protein also highly expressed in the mammalian placenta. Viviparity is regulated by more complex gene networks during reproduction compared to oviparity. The genetic architecture can tell us something about how fast and flexibly traits evolve. While involving more genes, gestation time may have evolved quickly due to many genes located on the sex chromosomes, which are generally known to evolve at higher speeds. The genetic architecture of parity mode can also inform us on how likely back-transitions from viviparity to oviparity are. Previous work suggested that a common lizard lineage in South-Western Europe re-evolved oviparity, and we are currently investigating if the genetic architecture in this lineage is similar, or different to the lineages studied here.

A comparison with other live-bearing animals, in which differential expression experiments between pregnant and non-pregnant animals had been performed, showed that similar types of genes are switched on during pregnancy whether in squamates or in mammals. While many genes seem to be unique or only partially shared across independently evolved viviparous species, their functions are similar. Therefore, our study showed that it is possible to identify the genetic architecture of a very complex phenotype that repeatedly evolved in evolution and lead to diversification. Viviparity evolved more than 150 times across vertebrates, and more than 20% of reptiles are live-bearers, and it seems that functionally similar genes are recruited in the transition from egg-laying to live-bearing. 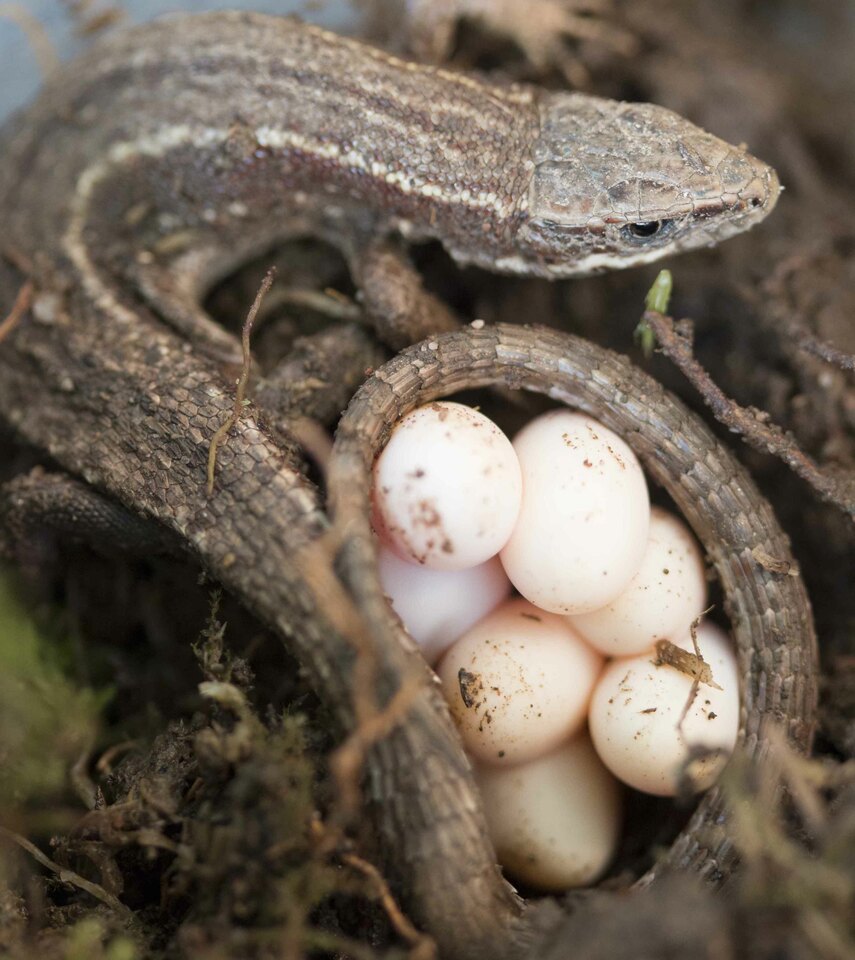