The oldest evidence of parasitism from the early Cambrian of China

Parasitism is everywhere in the world around us, but how and when parasites first evolved remains a mystery. New fossils from China reveal the oldest case of parasitism, allowing us to trace back parasitic interactions more than 500 million years to the rise of animals during the Cambrian Radiation.

In the forests of North America, a snail slowly starts its journey away from the undergrowth out into the open, light of day. For a largely nocturnal creature, this appears an unusual decision. As the sun touches its shell, it’s once dull eye stalks begins to vividly pulsate, the hypnotic rhythms, an advertisement that any bird simply can’t resist. A nearby crow, convinced it has seen a wriggling caterpillar, descends from its perch and in one fowl swoop, tears off the snail’s delectable-looking eye stalks and flies away, it’s appetite for the moment satisfied. This bizarre behaviour is not the fault of the snail, at this stage the snail is simply a puppet, efficiently controlled by the parasitic flatworm, Leucochloridium paradoxum. It is the parasite, living in the snail’s eye stalks and controlling its nervous system that causes it to go into disco mode and it is the parasite manipulating the snail’s behaviour by forcing it out into the open, increasing its chance of getting eaten. For, you see, the flatworm had been calling the snail home for some time but its final destination will be the bird’s intestine where it will reproduce and lay eggs, eggs that will be passed by the bird and ingested again by an unsuspecting snail replaying the devilish cycle all over again.

We have always been fascinated by how animals interact with each other and it’s hard not to be intrigued by parasites when you hear stories like the one above. Their lives are full of more plot twists than all of Alfred Hitchcock’s films combined and they are curiously macabre. Although modern parasites are undoubtedly captivating, as palaeontologists, we are interested in exploring the history of parasitism, answering questions such as, how and when did parasitism evolve. But, delving into the early evolution of parasites is not an easy task, as evidence of direct interactions between organisms in the fossil record is rare and frequently just a ‘one off’ event. Clearly demonstrating that a suspected parasite had a negative effect upon a host represents an even greater challenge. A challenge amplified by the fact that parasites are unlikely to be preserved as fossils in the first place because they are generally entirely soft-bodied.

Our quarry near the city of Kunming in southern China. Not a bad spot to search for Cambrian fossils.

Parasitism is a relationship between organisms, where one creature, the parasite, is dependent upon another, the host, for at least part of its life cycle. This type of relationship is beneficial to the parasite, but harmful for the host, as parasites divert resources for their own growth and reproduction. It’s easy to perhaps think of parasites as oddities of nature, gruesome anomalies that you might only encounter whilst wandering the Amazon rainforest or just through sheer bad luck. This outlook is understandable, as many can be very small and often barely noticeable to the human eye. But in reality, parasites are remarkably diverse and present in every ecosystem around the world with some estimates suggesting that around 40% of all organisms on earth are parasitic. Yet, despite their prevalence in modern ecosystems the history and evolution of parasitism remains shrouded in mystery.

You can imagine our surprise (and astonishment) that whilst splitting rocks with Australian, Swedish and Chinese colleagues in a quarry in southern China we discovered specimens of brachiopods that had hardened tubes encrusting the surface of their shells. But this fossil was not just a ‘one off’ and as we continued splitting, specimen after specimen were exposed, revealing a snapshot of thousands of brachiopods and their encrusting tubes living in dense concentrations on an ancient seafloor. The rocks preserving this seafloor are Cambrian in age (~512 million years ago), a period famous for recording the emergence of almost every major animal group that we see in the world today, in an event known as the Cambrian Radiation. Despite the many weird and wonderful animals you do find in the Cambrian, we had never before seen such a unique intimate interaction between two Cambrian animals. Immediately, our minds turned to the nature of such a relationship. Was the brachiopod host harmed by the encrusting tube, or were they living harmoniously?

Brachiopod specimens with hardened tubes encrusted on the surface of their shell. The preservation of chaetae (the hair-like extensions from their margin) indicate that they were encrusted when they were alive.

Through examination of hundreds of specimens, in our paper (https://www.nature.com/articles/s41467-020-16332-3) we demonstrate that brachiopods with tubes encrusting their shells have a reduced size compared to brachiopods that were free of encrustrations. The host brachiopod, showing a reduced size was therefore negatively impacted and the worms living in the tubes that encrusted the surface of the brachiopod shells were parasitic. But the plot thickens, remarkably the openings of the tubes are always oriented towards the inhalant feeding currents of the brachiopod, the perfect position to allow the parasites to steal a portion of food from their poor host. This behaviour of stealing food from another animal is known as kleptoparsitism, a common behaviour of animals today and one that we’ve all probably been subjected to, if you’ve ever lost a chip in a daring seagull raid whilst eating your lunch at the beach. The difference here is that this Cambrian relationship endured for the entire lives of both parasite and host – the worms were always and only encrusting this species of brachiopod. They are not found on any other substrate, an intimate relationship called obligate symbiosis.

Reconstruction of this unique community, showing thousands of brachiopods encrusted with their kleptoparasitic tubes forming meadows on the Cambrian seafloor.

Our discovery represents the oldest known definitive example of a parasite-host relationship and demonstrates that these interactions and animal behaviours, so common in modern ecosystems, can be traced back over 500 million years to the Cambrian Radiation. It appears now that when the first animals were emerging, evolving and spreading around the globe, parasites were spreading with them.

By Timothy Topper and Zhifei Zhang 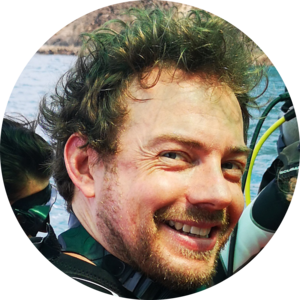 My current research is devoted to unraveling the events surrounding one of the most profound phases of evolutionary change in the history of life on Earth, the Cambrian radiation. I am particularly interested in examining the ecological interactions and trophic structure of the first animal communities, but as the Cambrian was so wonderfully weird, I am pretty much interested in all facets of this explosion of animals over 500 million years ago.
Follow