A new species of fossil reptile sheds new light on the origin of lepidosaurs—the largest group of modern reptiles
Tiago R. Simões
Postdoctoral Fellow, Harvard University
Follow
Like Liked by Paolo and 3 others
0

Taytalura alcoberi, represented by a three-dimensionally preserved skull from the Late Triassic epoch of Argentina, is phylogenetically inferred as the earliest known lepidosauromorph, and reveals that sphenodontian skull architecture is plesiomorphic for lepidosaurs.

All lizards, snakes, and the New Zealand tuatara sum up to nearly 11,000 modern species, representing the largest group of limbed-vertebrates in the planet today and with an ancient evolutionary history but quite mysterious early beginnings. This group, termed lepidosaurs, has an extremely patchy early fossil record, with only a few well-preserved fossils between the estimated origin of the group (~260 million years ago) and the late Jurassic (~150 Mya). By many standards, this consists of one of the biggest knowledge gaps in vertebrate evolution as it leaves us almost clueless about several aspects molding the origin of a major component of terrestrial ecosystems worldwide both today and in the distant past. Thankfully, despite my frequent complaints over this major limitation on the origin of all truly-scaly-like things, some findings in recent years by several colleagues across the world have shed some hope and light into the origin and early evolution of lepidosaurs (including findings I was directly involved with, as highlighted in previous posts and including the oldest fossil lizard in the world).

Yet, even with this recent increase of research interest in the early history of lepidosaurian evolution, reality is that most of those fossil findings are of difficult anatomical interpretation because of the limited quality of their preservation. This leaves important open questions, such as what is the ancestral body plan of lepidosaurs? What were the major anatomical innovations of the first lepidosaurs compared to their closest relatives, for example, archosaurs (crocodiles, non-avian and avian dinosaurs)? Despite proposed candidates over the past 120 years, no single fossil has passed all the available modern analytical tests to be the transitional form between early reptiles and lepidosaurs. Ideally, we would need at least one well-preserved skull (the body part where most diagnostic features can be found) to answer those questions…

Then it came the year of 2020, the number one public enemy of all human-kind. In between learning what the heck Zoom was and preparing for what was suggested as only a “few weeks” of lockdown, I got a message from colleagues in Argentina inviting me to work with them on a new fossil discovery. Dr. Ricardo Martínez (Universidad Nacional de San Juan) and Dr. Sebastián Apesteguía (Univ. Maimonides) showed me a three-dimensional skull they found in Triassic rocks of Northwest Argentina. The locality, called Ischigualasto, is also the place where some of the oldest known species of far less interesting reptiles—dinosaurs—have been found. That new specimen was immediately interesting as it had lots of features resembling early evolving (“primitive”) lepidosaurs. However, the skull had several cracks on its surface that made initial investigations difficult. Luckily, the specimen had been micro CT-scanned and we had that data available, creating a potential to unravel the secrets embedded in this new discovery. We then join forces with CT-scan guru Dr. Gabriela Sobral to process that data and generate high resolution images of all individual bones in that small skull. The results were nothing short of astonishing.

Here we had it, the very first 3D skull of an early lepidosaur, beautifully and digitally illustrated in a way that we could study from every possible angle (even at our remotely located desks)! We named it Taytalura alcoberi in our paper published last week in Nature. The species name means father of the lizards in the Quechua and Kakán languages of the native people of Andean Argentina (it has been a growing tradition in Latin American paleontology to give species names honoring Native American peoples and languages, of which I am very proud of as a Brazilian).

The anatomical details of Taytalura showed a composite of early reptile features along with others from sphenodontians (tuataras) and some from squamates (lizards and snakes), suggesting this could actually be the most primitive lepidosaur in the planet. We tested this in an expanded version of a dataset including morphological and molecular data that I had previously constructed to test such hypotheses during my PhD and originally published in 2018, which confirmed our suspicion that this was indeed a transitional form between early reptiles and the modern groups of lepidosaurs (termed crown lepidosaurs). It was incredible to FINALLY have an amazing information-rich fossil strongly supported by several analytical tests as the most primitive member of the group including all lizard- like reptiles—i.e., originating before the evolutionary split between the two major lepidosaurian groups (squamates and sphenodontians).

But what can this new finding tell us about the origin of lizard-like reptiles?

At first glance, Taytalura really resembles the most primitive members of the sphenodontian lineage, which was more diverse than squamates during the Triassic and Jurassic but have only one species surviving today (Sphenodon punctatus, the tuatara of New Zealand). Additional analyses confirmed exactly that, indicating that the ancestral body plan of lepidosaurs resembles that of primitive sphenodontians and that squamates represent a substantial deviation from this early morphological stock. Yet, squamates eventually evolved a much wider diversity of body shapes, which may have contributed for the greater evolutionary success of true lizards and snakes relative to sphenodontians.

Another interesting aspect is that all early evolving fossils of squamates, sphenodontians, and fossils of ambiguous interpretation (perhaps close relatives of Taytalura) were found in other continents, mostly in Europe. Some of these include the oldest squamates and sphenodontian fossils, which have been found in western Europe and are in fact 10 million years older than Taytalura. All of this evidence combined points to a more complex early history of lepidosaurian evolution, indicating that early lepidosaurs were able to migrate over thousands of kilometers separating north and southwest Pangaea (respectively where Europe and Argentina were during the Triassic) and that primitive lepidosaurs were contemporaneous with the first true lizards and sphenodontians for millions of years—perhaps up to 20 million years!

The relatively young age of Taytalura (231Mya) compared to the estimated origin of lepidosaurs at 260Mya suggests that, despite this major breakthrough, we still have to find the geologically oldest members of this early phase of lepidosaur evolution. Such finding would give is as much better estimates on the exact timing of the evolutionary split between lepidosaurs and archosaurs in the evolution of reptiles. It would also give us better hints to the place of origin of lepidosaurs… Could it be in the southern continents, as Taytalura, thus contradicting decades of data coming from Europe mostly? Only time will tell. 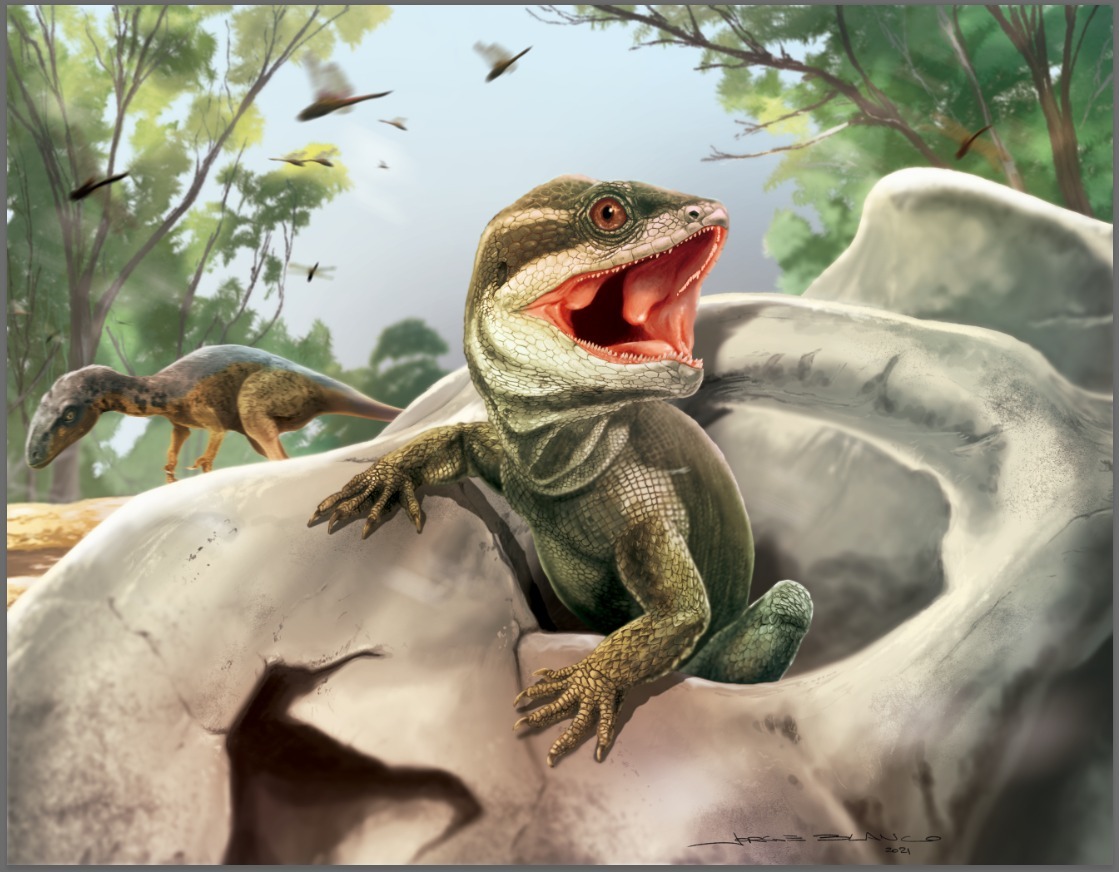