Honeybees represent a fascinating model to investigate how the gut microbiota affects social behaviour at both the individual- and the societal-level. Can gut microbes (and variation in gut microbiota composition) influence the way animals organize their societies?
Joanito Liberti
Postdoctoral Researcher, Université de Lausanne
Follow
Like Liked by Evelina Satkevic and 4 others
0

Tracking the behaviour of normal versus microbiome-free honeybees in experimental colonies, the authors show that gut microbiota colonization was associated with an increase in the rate and specificity of social interactions among bees and higher abundances of brain metabolites linked to these inter…

There is increasing evidence that gut microbes affect the neurophysiology and consequent behaviour of their animal hosts, including the host’s social behavior 1-3. Accordingly, recent studies have found gut microbiota composition to associate with multiple neurological diseases and behavioural dysfunctions 4. Evidence from mammalian model systems has accumulated most rapidly – these models are clinically relevant and may facilitate the development of treatments for neurological diseases and behavioural disorders which affect millions. However, little is known about how the ‘gut microbiota – brain axis’ varies across the tree of life. From an evolutionary biology perspective this is unfortunate because bacterial symbionts have been present since the first neural systems evolved and may have been important in the evolution of neural function and behaviour. If microbe-brain interactions are ancient, to what extent do they influence animal cognition and (social) behaviour? And how similar/ different are the proximate mechanisms regulating these interactions across animal lineages? Answering these questions is important because it can teach us about how animal behavior evolves at the individual-level, and how individual-level effects build up to shape animal societies and their cultures. Could the microbiome influence the organization of animal societies?

These are the kinds of questions that I wanted to shed light on when I moved from the University of Copenhagen, where I did my doctoral studies, to the University of Lausanne, funded by a Marie Skłodowska-Curie Postdoctoral Fellowship. To properly understand evolutionary convergences in microbiome-gut-brain axes, research groups around the world will need to provide mechanistic characterizations of this axis in different species. Choice of study species is important – the work may be prohibitively challenging in species where the microbiome is very complex, unstable, yet to be characterized or cultured, or not manipulable. In my grant application I proposed to investigate the gut microbiota – brain axis in the honeybee. Social insects like honeybees offer a unique opportunity to unravel the contribution of symbiotic microorganisms to complex social traits. A decade of previous research into the honeybee gut microbiota had laid a fantastic foundation for this study. The University of Lausanne was an ideal place - Prof. Philipp Engel at the Department of Fundamental Microbiology leads a research group specialized on the honeybee gut microbiota. The lab has a large collection of honeybee gut symbionts stocked at -80 ºC, protocols to produce germ-free honeybees without antibiotics (which can have unintended side-effects), and protocols to reconstitute the gut microbiota by feeding the bees bacterial cultures or gut homogenates 5,6. In the same building, at the Department of Ecology and Evolution, Prof. Laurent Keller developed an automated behavioural tracking system, and uses it to decipher the collective behavioural dynamics of social insects at unprecedented scales and resolutions 7,8. With this sophisticated setup it seemed feasible to study the effects of the gut microbiota on the social (group-level) behaviour of the honeybee and associated individual brain physiology.

These experiments are labour-intensive. Tomas Kay and I spent an entire experimental season conducting nine replicates in series (to produce gnotobiotic adults we need to first collect pupae, which in Switzerland are only produced between late April and early October). Each experimental replicate lasted 13 days. Starting on a Friday, we would collect a brood frame from a hive on campus and spend the day manually extracting pupae of the right development stage. We needed 200 adult bees for each experimental replicate so extracted ca. 400 pupae to give a comfortable margin for development failure. We placed these pupae in sterile cages inside an incubator, and they would emerge as adults over the weekend. Naturally, these emerging adults would rapidly acquire a standard gut microbiota, but in the absence of contact with older nestmates or nest material they remain ‘microbiota-depleted’.

On the Monday, we would transfer the bees into new sterile cages and manually glue QR-codes (which can be scanned multiple times per second by the tracking system) to their thoraces. The same day we would inoculate some (but not others) of the tagged bees with gut microbiota. We waited until Wednesday to start the tracking, by which time the microbiota should have fully established within the guts of the colonized bees. While these methods are generally highly effective, the risk of contamination is non-zero so we could never be sure that microbiota-depleted bees were truly sterile until the experiments were long-finished and we had sequenced bacterial DNA from their guts. These were high risk – high gain experiments. On the Wednesday, we moved two groups of 100 bees (one microbiota-depleted and one colonized subcolony) into the tracking systems. Each 100-individual subcolony could freely move between two identical plexiglass arenas covered with transparent lids and connected by a plastic tube. One arena was kept at 30 ºC in the dark (to mimic in-hive conditions), while the other was exposed to cycles of light, temperature and humidity mirroring what bees would experience when foraging outdoors. We let the bees acclimatize for several hours and then began recording their positions and orientations multiple times per second. After one week of tracking we would collect the bees, scan their tags (to determine their identities) and store them at -80 ºC for molecular analyses.

After repeating this process for the ninth time we decided that we had performed enough experimental replicates to run the data analyses. The results clearly confirmed our predictions: bees that had been inoculated with gut microbes engaged in more social interactions than their microbiota-depleted sisters. This pattern was consistent with findings from other model organisms, where the gut microbiota is known to promote host social responsiveness. However, we could go one step further, to show how this individual-level change influenced group-level organization: bees with a gut microbiota tended to form stronger social ties with specific nestmates, while microbiota-depleted bees interacted more randomly. This would likely impact nutrient and information flow within colonies, meaning that the gut microbiota may be vital in allowing bees to be so well organized and efficient at extracting, processing and storing resources from their environment.

Pollinators are declining at an alarming rate and have inestimable value to maintaining ecological balance via their ecosystem services. If we can understand how symbiotic bacteria enhance their pollinator hosts’ cognitive performances and social organization we may be able to design ‘psychobiotic’ treatments to improve health and manage (collective) behaviour. The opposite reasoning could be applied to insect pests and invasive species, which are responsible for some of the most serious ecological disturbance and disease spread dynamics. This research field, particularly in insects, is in its infancy but I feel honoured to have spearheaded this research project, and to have worked alongside a fantastic and supportive group of colleagues, mentors and friends.

Read the press release (French/English) from the University of Lausanne 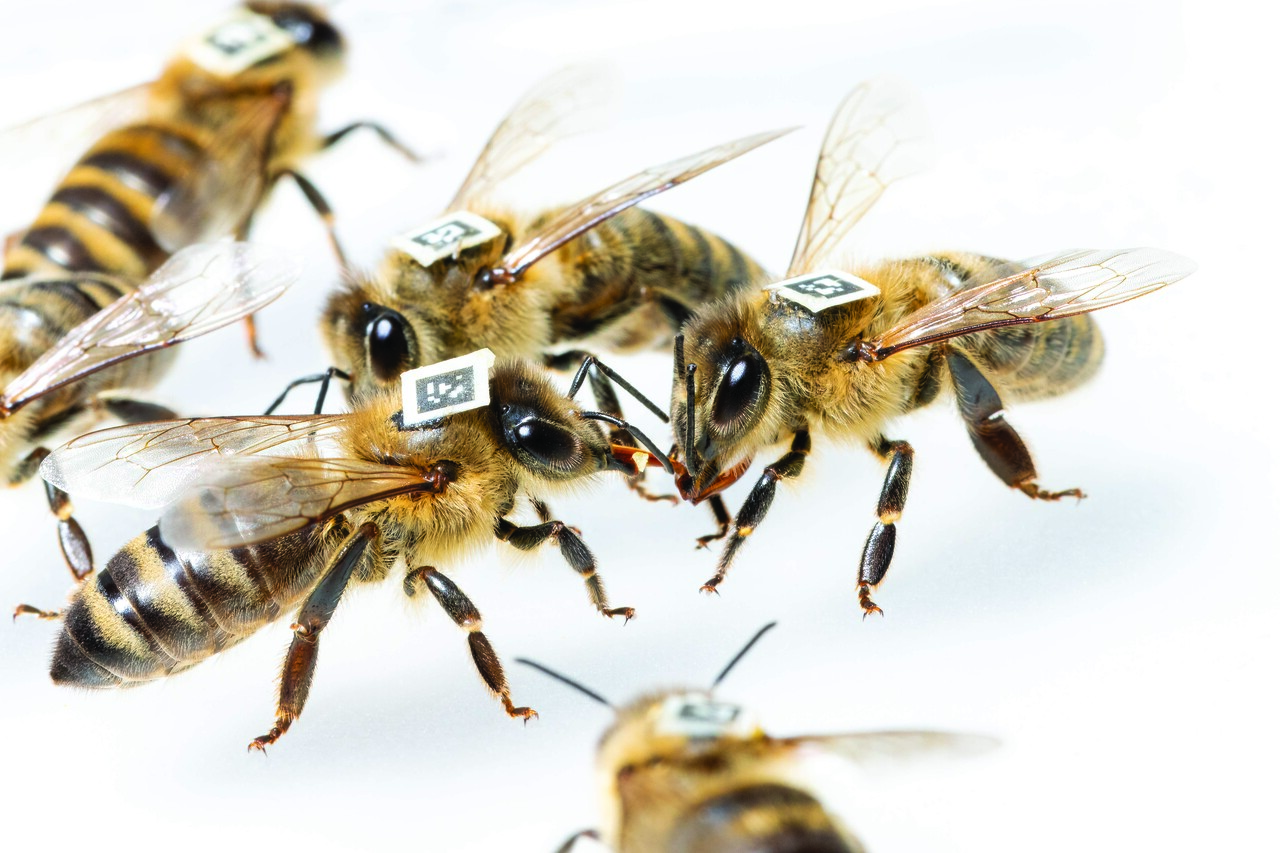 Honeybees represent a fascinating model to investigate how the gut microbiota affects social behaviour at both the individual- and the societal-level. Can gut microbes (and variation in gut microbiota composition) influence the way animals organize their societies?