Rising temperatures and climate change helped triggering the explosion of new reptile body plans and the rise of modern lineages in the distant past.
Tiago R. Simões
Postdoctoral Fellow, Harvard University
Follow
Like Liked by Paolo and 2 others
0

Sixty million years of climatic crises drove the rate and mode of reptile adaptive evolution across the Permian and Triassic.

What are the long-term effects of climatic change on the evolution of life? This is a critical question given the fast pace of anthropogenic climate change and its unknown impacts into the future of the world’s biodiversity. Predicting the future of biodiversity can be extremely challenging, but fortunately the fossil record provides us with several important lessons from similar events that happened in deep geological time (see my previous discussions on this topic in this post from 2019). A good example comes from a series of climatic crises that spanned for nearly 60 million years between the Permian and Triassic periods (295 - 235 million years ago). Coupled with intense global warming, these led to two of the largest mass extinctions in the history of the planet: the end-Guadalupian (261 Mya) and the end-Permian (251.9 Mya) mass extinctions, which decimated 70% and 86% of all species in the plant respectively in just 9 million years apart from each other. Never before or since, life on Earth was at a greater risk of complete annihilation.

The environmental crises in question were triggered, among other factors, by massive releases of carbon dioxide and other greenhouse gases released by massive volcanic eruptions in what is today Siberia (unfortunately to us, at rates which are much lower at 1.5Gt C/yr compared to the 31Gt C/yr humans are currently releasing into the atmosphere!). The impact of these events on various organisms can provide key insights into how global warming and subsequent climate change impacted global biodiversity. However, these effects have been studied more extensively among marine ecosystems, whereas our understanding of their impact over large scales of time on terrestrial vertebrates has remained largely unknown.

In a study just published today in Science Advances, I led a team of colleagues -- Dr. Christian Kammerer (North Carolina Museum of Natural Sciences), Dr. Michael Caldwell (University of Alberta, Canada) and Dr. Stephanie E. Pierce (Harvard University)--investigating precisely the question of how such fast environmental shifts in the deep past impacted the evolution of a major group of terrestrial vertebrates—reptiles.

Reptiles were relatively rare during most of the Permian (299-252 Mya) compared to mammalian ancestors (early synapsids) but became incredibly more diverse during the Triassic (252-200 Mya). In fact, one could say that the Triassic was the apex of reptile evolution, when most of the major living groups of reptiles (crocodiles, lizards, turtles) and their extinct relatives (e.g., non-avian dinosaurs and marine reptiles) became extremely diverse in number of species and anatomically (Fig. 1). On the other hand, early synapsids went mostly extinct at the end of the Permian with only a few groups surviving into the Triassic (Fig. 1 and 2). Reptiles became important component of ecosystems worldwide, from deserts to tropical forests, from aerial to aquatic habitats, from small to large -sized herbivores and predators. This period also gave rise to some of the most bizarre animals that have ever lived, including the hammerhead marine herbivour Atopodentatus, the platypus faced Eretmorhipis, the horned bull- headed Shringasaurus, among many others.

It has been long suggested that the major cause for the evolutionary radiation of reptiles in the Triassic was the extinction of reptile competitors (early synapsids) during the end-Permian mass extinction at 252 Mya, which would have opened up ecological opportunities for reptiles in the aftermath of that event. However, our findings revealed that climate itself had a more direct and long-lasting role in reptile evolution and than previously anticipated. By using recently developed techniques to study evolution across deep time (subject of a future post!) and a vast new dataset, we found that periods of fast climatic shifts in association with global warming were strongly concurrent with exceptionally high rates of morphological evolution in most groups of reptiles as they adapted to new environmental conditions (Fig. 3). Most of these reptile groups were closely related to archosaurs (e.g., marine reptiles and the forerunners of crocodiles and dinosaurs, Fig. 2) and became the dominant components of terrestrial ecosystems worldwide during the Triassic. However, what is noteworthy is that such increase in evolutionary rates started long before the late Permian extinctions, since at least 270Ma. This indicates that the diversification of reptile body plans was not triggered by extinction of reptile competitors (early synapsids) during these mass extinctions as traditionally thought, but in fact started at about 20 million years before that and coincidental with the onset of massive global temperature changes.

Interestingly, this pattern was not true for only one reptile lineage, although an important one that eventually became the largest group of terrestrial vertebrates in the planet today: the branch that gave rise to the lizards, snakes, and tuataras (lepidosaurs, Fig. 2). Lepidosaurs underwent rates of evolution that were always below background rate levels and continue to decrease over time across periods of climatic change. Such rates were so slow that they can be inferred as characterizing stabilizing selection, when natural selection imposes strong constraints on the diversity and rates of morphological evolution. But why such a different response from all other reptiles?

It turns out that answer seems to be related to their very different metabolisms, which can be inferred from their body size. Small-bodied animals can better exchange heat with their surrounding environment compared to large animals. By collecting body size data on all groups of reptiles during that timeframe, we demonstrated that the first lizards and tuataras were much smaller than other groups of reptiles (just like today!) and so they were better adapted to cope with drastic temperature changes. Their body sizes worked out as useful pre-adaptations to the drastic temperature changes during the Permian and Triassic.

Archosaurs, on the other hand, had to change their bodies dramatically in order to adapt to the new environmental conditions, which is reflected in their high rates of evolution. The changes also included changes in body size (some groups became smaller over time) or the invasion of aquatic environments (some groups evolved to become marine reptiles), as water confers greater thermal stability than land. Large-bodied reptiles also became confined to temperate and polar regions, suggesting they either went extinct in the tropics or migrated to higher latitudes. In combination, reptiles were able to undergo multiple adaptive responses survive such critical times, which contributed to their explosion of morphological and species diversity. 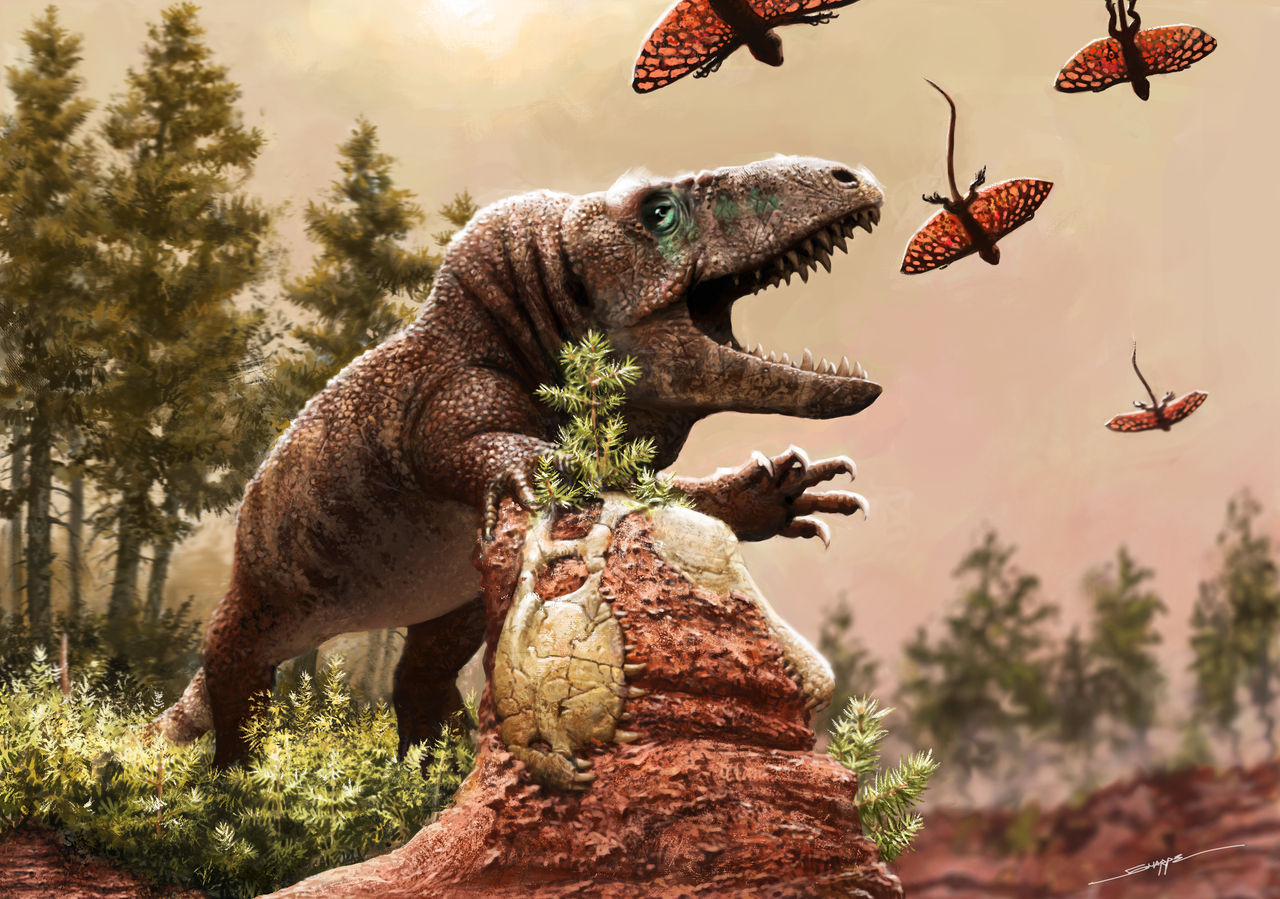 Rising temperatures and climate change helped triggering the explosion of new reptile body plans and the rise of modern lineages in the distant past.