In lakes, bacteria are at the center of most biogeochemical transformations, consuming carbon in different forms and converting it into their own bacterial biomass and carbon dioxide (CO2). While the bulk of aquatic bacteria grows on molecules of dissolved organic carbon (DOC) and can be referred to as heterotrophs, others are specialized in the utilization of methane (CH4) – a potent greenhouse gas naturally produced in lakes1 – and are referred to as methanotrophs (or methane-oxidizing bacteria, MOB)2.

When aquatic bacteria are eaten by other organisms such as microscopic animals living in the water column (zooplankton), the carbon in the bacterial biomass is introduced into aquatic food webs – a process named microbial loop and first hypothesized for the ocean by Azam et al. in 19833. In the decades that followed this work, freshwater ecologists have learned that, due to the microbial loop through heterotrophic bacteria, lake food webs are partially subsidized by terrestrially-originated dissolved organic carbon (e.g. plant detritus) that washes in from the surrounding landscape4 (coining the phrase that ‘fish are made of leaves’) (Figure 1a). Similarly, part of the CO2 released by freshwater bacteria – which represents an important share of the global natural CO2 emissions to the atmosphere5 – belonged to tree leaves one day6.

More recently, plenty of evidence has arisen around the importance of a different pathway in the original concept of the aquatic microbial loop – a methane-driven pathway (Figure 1b). By tracing stable isotopes (i.e. atoms of the same element but with different atomic masses) and biomarkers (i.e. specific chemical compounds, such as lipids), many studies have shown that methanotrophic bacteria are also a crucial carbon source to the food web of various aquatic ecosystems7. On a personal note, such fact became first apparent to me and piqued my interest during my master’s studies, when I found that low carbon stable isotopic signature of zooplankton suggested the support of methane to the food web of a tropical lake8. This finding motivated me to pursue a PhD to learn more about methanotrophy in lakes.

As I began digging into the literature of the topic, I soon realized how methanotrophs are minority in numbers if compared to the majority of aquatic bacteria (heterotrophs). After all, the concentration of methane in lakes is usually much lower than that of dissolved organic carbon. Moreover, methanotrophs are not as equally spread along the water column as heterotrophs, since methanotrophic abundance peaks where there is plenty of methane but also available oxygen in deeper layers of lakes9,10. So, how could the methane microbial pathway be that relevant?

To solve this puzzle, in this study we (me, my colleague Shoji Thottathil, and my PhD supervisor Yves Prairie) decided to step back from the food web perspective and look into the root of the problem: we set out to quantify the relative contribution of methanotrophy and heterotrophy to the microbial metabolism of six contrasting lakes in the Laurentians region of Quebec, Canada. We wanted to find out how and why the microbial methane consumption could be of comparable importance to the microbial consumption of dissolved organic carbon in lakes.

By visualizing and measuring lake bacteria under the microscope (with the support of Clara Ruiz González), we learned that methanotrophs – particularly of one subgroup – have much larger cells than other lake bacteria. As soon as we visualized these methanotrophic cells under the microscope, we realized how big they looked hanging by the side of other bacterial cells in the same water sample (Figure 2). The cell size of bacteria is an important feature because it influences on the total biomass of a microbial group and because larger cells are more likely to be ingested by other organisms and to support aquatic food webs11. By accounting for the biomass of cells and the rates of carbon consumption in experiments, we also learned that methanotrophs are faster carbon consumers than heterotrophs. In other words, by unit of biomass, methanotrophs can consume more carbon than heterotrophs in the same time interval.

In this study, we also learned that methanotrophy rates beat heterotrophy rates where there is abundant methane and just enough oxygen. In the lakes where the water layer with high methane concentration and available oxygen represented a large portion of the total lake’s volume, methanotrophy accounted for a relevant fraction of the total microbial carbon consumption (up to 78%). Finally, the role of methanotrophy in the microbial metabolism of lakes was related to the color of the water (i.e. how clear or dark the water is, due to dissolved compounds), which is likely related to the extent of the layer with high methane concentration and available oxygen.

Overall, with this study we have learned that methanotrophy is likely a critical microbial process in many lakes and that cell features of methanotrophic bacteria may compensate for their general low abundance, enabling an important methane-driven microbial pathway in lakes. While we gave an important step, we only scratched the surface of what there is to be learned. It would be interesting if future studies could include a wider geographical range of lake ecosystems, adopt different experimental/technical approaches, and quantify the role of the methanotrophic metabolism in lakes across the whole annual cycle.

Lastly but very important, thanks to the Fonds de recherche du Québec (Nature et technologies) for my PhD scholarship, the Groupe de recherche interuniversitaire en limnologie (GRIL) for funding and technical support, the Natural Sciences and Engineering Research Council of Canada – Discovery grants for the research funding, and the Institut de Ciències del Mar (ICM-CSIC) for the infrastructure and support for the microscopic analyses. 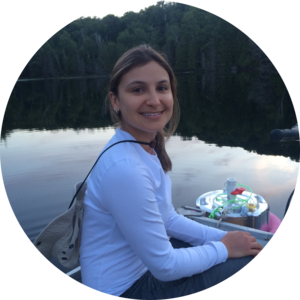