Behavior of snow monkeys hunting fish to survive winter.
Koji Tojo and Masaki Takenaka
2 contributors
Like Liked by Evelina Satkevic and 2 others
0

About a year ago, in November 2021, our research group published a paper on the possibility that Japanese macaques in the Japanese Alps (Kamikochi) region catch and eat fish in winter (Milner et al., 2021, Scientific Reports). About 200 Japanese macaques in four troops live in the Kamikochi region. Kamikochi is a sub-alpine zone (1,500–1,600 m altitude) where the temperature drops below -20°C in winter. The snow monkeys of Kamikochi live in the coldest regions of all primates, other than humans. It was an interesting challenge to gain an understanding of how they manage to survive in the winter when food is so scarce.

When we published our paper a year ago, we only had indirect information indicating  a diet including fish based on brown trouts’ DNA which was detected in the feces of multiple individuals by means of metagenomic analysis conducted on the feces of snow monkeys collected over multiple winters. At that point, the possibility remained that they had been scavenging for leftover food from mountain climbers in winter. However, after the publication of that paper, many media outlets covered our paper, which greatly increased public interest. Soon after, a series of images were provided to us by two cameraman who had taken photographs of snow monkeys in Kamikochi as they were biting and eating fish. Since these images further advanced our research understanding, we soon published additional articles in this “Nature Portfolio” site (January 1st, 2022; Figs 1–2). At this stage, snow monkeys’ fishing was almost certain, yet the only regretful thing was that no one had actually witnessed the decisive moment of their fishing. However, this significant issue was finally resolved through the collaboration of our research team and an NHK film crew (Figs 3–5).

By means of our research and filming from January to March 2022 finally, the snow monkey’s actual moment of fishing was captured on camera (Fig. 3). This meant that the fishing behavior of monkeys had been recorded for the first time ever. This fishing was not specific to a specific individual, and multiple monkeys in at least three troops were successfully in fishing. In total, 14 scenes were filmed of verified fishing, along with an additional 6 presumed cases of fish predation. It can be considered that there is definitely an established “fishing culture” within at least three troops. Our paper also considers the evolutionary process by which snow monkeys’ adapted fishing which may have led from aquatic herbivory and then anb aquatic insect diet and then to a fish inclusive diet.

This paper publishing our one-year update on the research to date (Takenaka et al., Scientific Reports) notes that although we conducted a detailed analysis of fishing time zones and weather conditions, we did not observe any clear trends related to environmental conditions. Further collaborative research with the NHK film crew is also planned for the upcoming winter season (2022–2023 winter). Currently, in collaboration with researchers who specialize in the behavioral ecology of primates, we are trying to identify and observe specific snow monkeys individually. We would like to make progress to further update our knowledge and understanding of the interesting behavior and ecology of these snow monkeys. 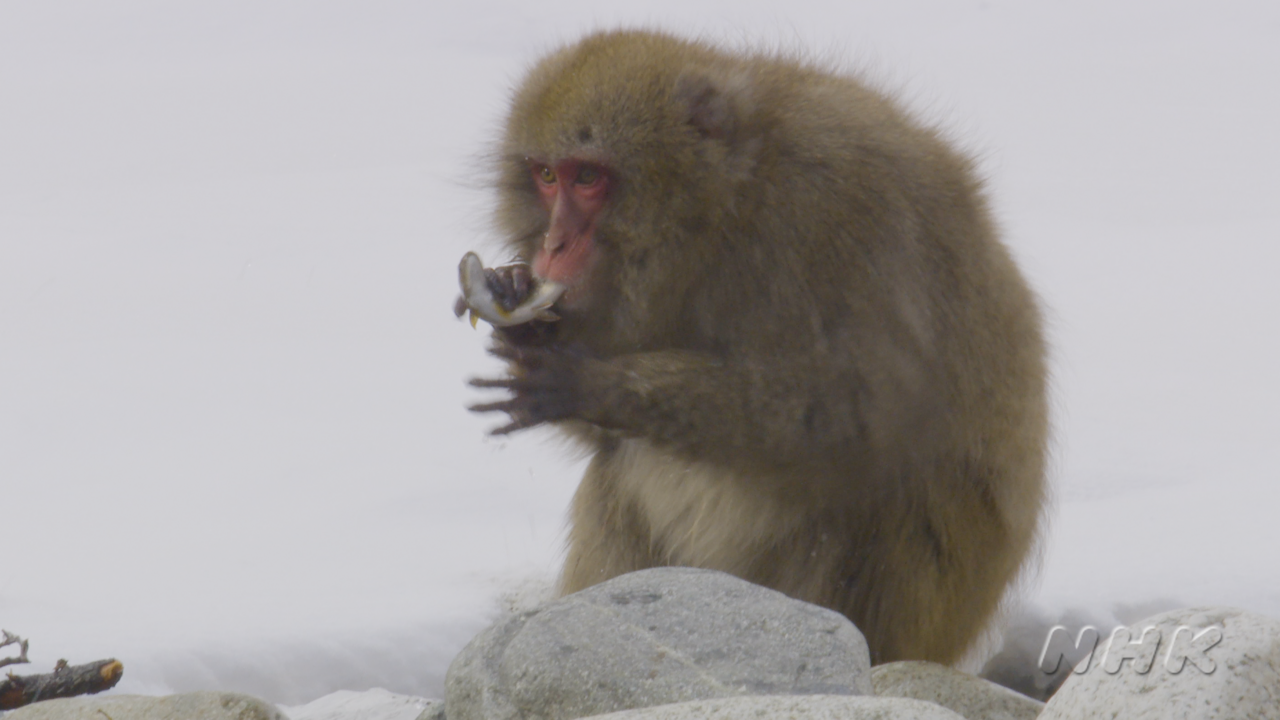