Time is ticking in the deep sea

Biological rhythms are a fundamental property of all life. Marine ecosystems are shaped by environmental cycles, ranging from tides to seasons. Biological rhythms synchronized to these cycles have been described, mostly in intertidal organisms. What about species living in the deep-sea?
Audrey Mat and Marjolaine Matabos
2 contributors
Like Liked by Gao Jianguo
0

Little is known about gene expression of organisms in the deep sea, partially owing to constraints on sampling these organisms in situ. Here the authors circumvent this problem, fixing tissue of a deep-sea mussel at 1,688 m in depth, and later analyzing transcriptomes to reveal gene expression patte…

The project stemmed from an unexpected encounter between a deep-sea ecologist and a marine chronobiologist. June 9, 2015. I was trying to troubleshoot some R code but could not find the bug that prevented the analysis to run. I decided to take a break and to attend several seminars presented in the next-door building. That day, Marjolaine Matabos, from the Deep-Sea lab, was presenting her latest research in deep-sea ecology showing clear temporal patterns at hydrothermal vents. Marjolaine talked about tidal signals, and how they seem to affect species behaviour at depth beyond 2000 m in the Pacific. Tides in the deep? I was somehow flabbergasted and intrigued. There was a nagging question: could there be biological clocks down there? We had a great and long discussion during and after the presentation, and decided there was something to dig in. The task was not an easy one – studying chronobiology in the deep sea holds many technological challenges – it would be a long path…

We spent a year building the project and collaborations. What we first needed was preliminary data that supported our hypothesis in order to convince funding bodies. We knew that tides governed environmental conditions in vent habitat through variation of barotropic pressure or modulation by bottom currents. But the idea that species could be profoundly affected by the tides, or that they could even possess internal clock(s), was still challenged. To start, Marjolaine gathered data on the opening and closing patterns of the mussel Bathymodiolus azoricus from daily images acquired by the seafloor observatory EMSO-Azores. These preliminary observations supported the occurrence of tidal cycles in the mussels’ behaviour (Mat et al. 2020)! In parallel, and with the help of the team from my previous postdoc lab, I tested a number of molecular biology protocols for the deep-sea. Armed with this new information, I applied for funding in 2016 and was appointed as a LabexMER Postdoctoral Fellow. The project effectively started in February 2017, almost two years later... and that was just the beginning of a new adventure.

First, the basics. Fact 1: the deep is deep, it requires a submersible to explore its lands. Fact 2: the deep is dark, no navigation is possible without light, especially when you pilot a 10-20 million euros robot. But for chronobiology, one needs to work under red light: light - in the blue and green spectrum - can reset the clock in animals. It was unknown whether deep-sea mussels were still capable of perceiving light but if they were, working under white light was not a good option.  Fact 3: the pressure is elevated, animals don’t survive the voyage to the surface, at the very least not without stress. As RNA is very sensitive to modification and degradation, we needed to preserve the samples directly on the seafloor. The field work was a thrilling challenge, and required an important and reciprocal sharing of experience, plus creativity, to address the constraints related to both chronobiology and deep-sea biology. The first step was to convince my deep-sea scientist fellows and the ROV team to operate in these conditions:  under red light, the visibility was reduced to a maximum of 4 m, compared to ~15 m under regular white light, which can jeopardize the ROV safety. The whole expertise of the Deep-sea lab members, ROV team and ship crew was put at use to insure the ideal sampling scenario in this hostile, remote environment. The use of red light and the application of a long and regular sampling protocol (every 2h 4min for 24h 48 min) was a real technical feat in the deep sea, and a first.

Although we spent a year preparing the best we could, until the sampling was completed, we were not sure we would get through it. So many variables were at stake. Many challenges remained on board. We had to preserve the sampling area from any white light influence on previous dives: a “red zone” consisting of a 20 m radius around the target site was created and showed on all piloting screens in order to prevent other experiments in the zone, which could affect the animals. And then you just hope nothing will go wrong: on a ship, a day of sailing away from land, you have to adapt, there is no way to replace a spilled product or buy a spare mechanical piece, you hope the ROV will not have any mechanical or electronic impairment (which often happens on this complex pieces of technology!) because you have a tight schedule!

All went well. We are so grateful to the entire team: the Captain of the ship, the ROV pilots, the technicians, and the scientific party, they all made this happen! But it was not over. Still, despite video cameras and the skills of the ROV team, it is difficult to assess how many animals you sample exactly during the dive. Each surfacing of a sampling box was a surprise: how many mussels? Did the fixation work? After the cruise, we knew our sampling strategy had worked, and we had enough animals for each time point. However, we still didn't know if the RNA quality would meet the high standards required for sequencing, which took another several weeks to find out. Another several months was required to obtain the results of the analyses showing consistent rhythmic patterns in B. azoricus. Experiments ran in parallel in the lab strengthened our observations and validated the need to work under red light in the deep-sea.

July 10, 2020. The article describing our work is now on line. Serendipity. I like the way the word sounds. I like even better what it means, because I believe it tells something about the fundamentals in research. What started like a laborious day 5 years ago ended in a great meeting that turned out to lead to an amazing human and scientific journey… 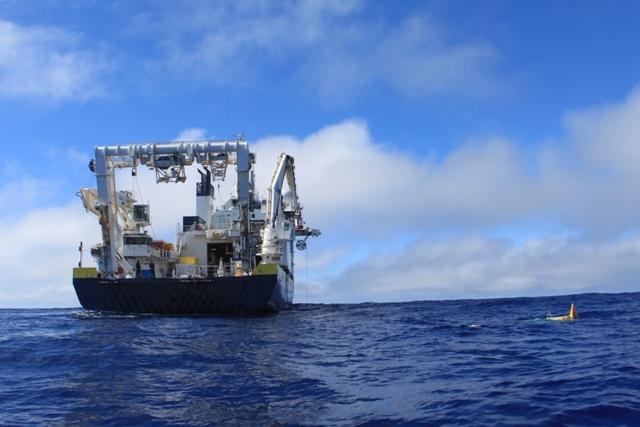 Time is ticking in the deep sea

Biological rhythms are a fundamental property of all life. Marine ecosystems are shaped by environmental cycles, ranging from tides to seasons. Biological rhythms synchronized to these cycles have been described, mostly in intertidal organisms. What about species living in the deep-sea?