On Earth’s hottest coral reefs, tiny fishes are scarce and skinny. Their failure to adapt to extreme temperatures carries a sobering implication: the smallest marine vertebrates may struggle to keep up with globally rising temperatures. As they vanish, so does their unique contribution to reefs.
Simon J. Brandl and Jacob L Johansen
2 contributors
Like Liked by Marcelo Campolina

Brandl, Johansen et al. compare organismal traits, community structure, and productivity dynamics of cryptobenthic reef fishes across two locations, the Arabian Gulf and the Gulf of Oman, the former of which harbors the world’s hottest coral reefs. They show that environmental extremes in the Arabia…

Like many research projects, the basis for this paper was set during an innocuous email chain in 2017, tucked away between innumerable apologies for delayed responses. Within this chain, many musings about upcoming projects and opportunities were made, but eventually, a vague plan to sample cryptobenthic reef fishes in the southern Arabian Gulf emerged.

Cryptobenthic (or microbenthic) fishes are small (< 50mm), camouflaged reef fishes that tend to stay hidden from visual censuses. The setting of the southern Arabian Gulf promised an intriguing backdrop. With sizzling summer water temperatures of up 36ºC, the coastlines of Abu Dhabi and Dubai host the hottest, most thermally extreme coral reefs on our planet. Notably, these conditions mirror a thermal environment that is predicted to occur on many reefs by the end of the 21st century, and could provide insight into the inner workings of future coral reefs.

We hypothesized that the thermal extremes of the Arabian Gulf may have led to unique communities of specialized, thermally adapted, and potentially endemic cryptobenthic fishes, found nowhere else in the world. Since nobody had quantitatively sampled cryptobenthics in the Arabian Gulf, we were eager to explore a new world of tiny fishes. However, when we hauled in our first batch in April 2018, we were disappointed to find that there weren’t many cryptobenthics at all, and the ones we found weren’t particularly exciting. This gave rise to our alternative hypothesis: could the hostile environment of the Arabian Gulf simply be too much for small ectotherms like cryptobenthic to handle, even when provided with several millennia to adapt to these local conditions?

To address this, we also sampled cryptobenthics in the nearby, but much more thermally benign Gulf of Oman. Dodging several misfortunes and challenges, such as seeing our boat trailer break down in the middle of the desert, sneaking overtly scientific sampling equipment past the valet into our hotel rooms to set up a makeshift lab, and successfully circumventing the hotel’s two-ice-buckets-per-room-per-day policy to keep our samples fresh in the bathtub, we managed to obtain data from reefs in the Gulf of Oman.

As predicted, reefs in the Gulf of Oman were crawling with cryptobenthics, boasting more than twice the number of species and five times more individuals per square meter. However, the absence of so many species from the Arabian Gulf did not seem to be driven by absolute thermal tolerances. In fact, we tested the heat tolerances of several species from the southern Arabian Gulf and species only found in the Gulf of Oman, only to find that their critical thermal maxima were not all that different and consistently within the maximum summer temperatures commonly found in the Arabian Gulf.

But merely surviving the heat may not be enough. Arabian Gulf populations of the species that occurred in both locations consistently showed an impoverished body condition, weighing up to 60% less than their Gulf of Oman counterparts at a given length, and showed less diverse and distinct diets. For small tropical ectotherms like cryptobenthics, which are already situated at the extreme negative end of the vertebrate size spectrum, the extreme heat of Arabian Gulf reefs may simply require more energy to grow and reproduce than they can feasibly obtain, especially when relying on a reduced set of resources.

This ‘energetic double jeopardy’ paints a grim picture for the future: as cryptobenthic fishes struggle to keep pace with rapidly warming waters, many may vanish from coral reefs, leaving only a limited set of species with relatively low energy requirements. With this, their unique contribution to coral reef ecosystems, which consists of growing, dying, and recruiting rapidly and in tremendous numbers to fuel larger predators, may be fatally compromised. 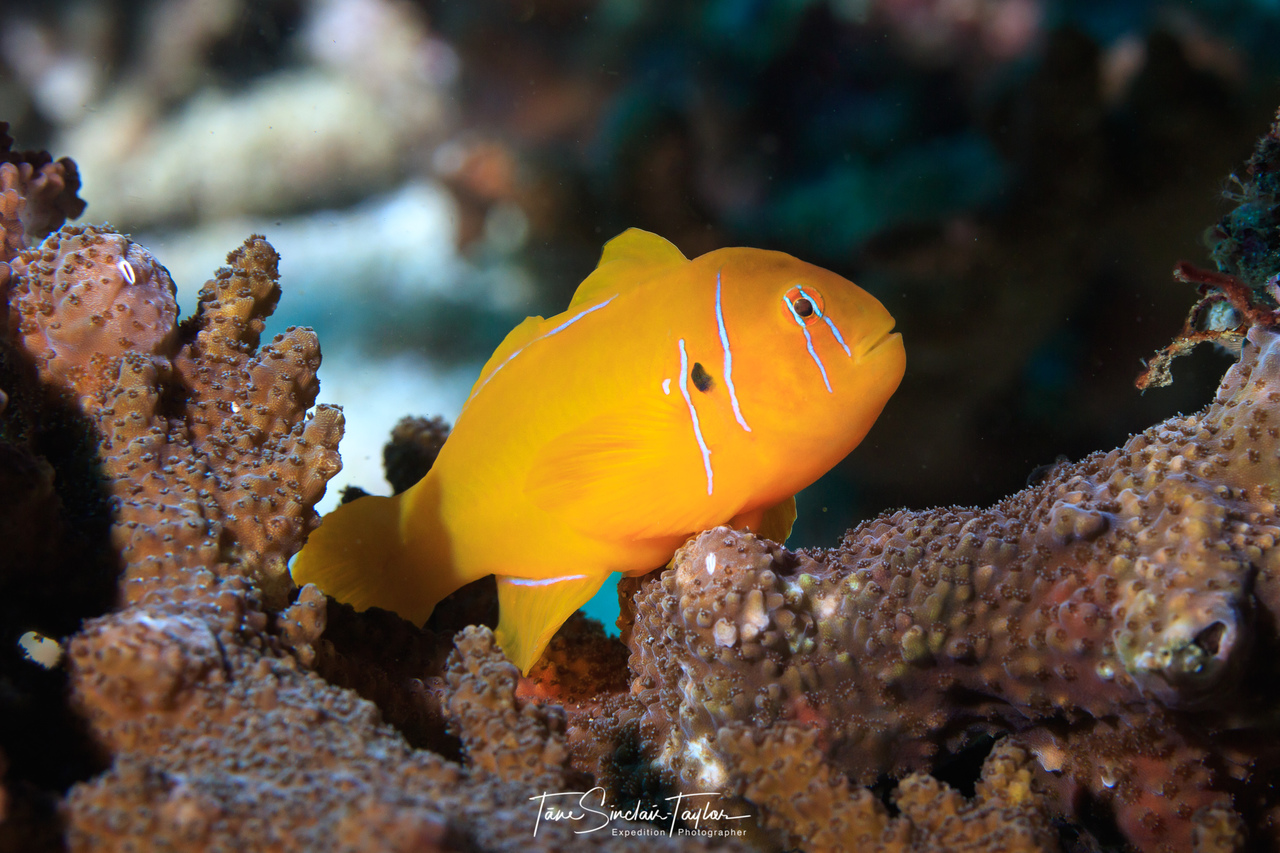 On Earth’s hottest coral reefs, tiny fishes are scarce and skinny. Their failure to adapt to extreme temperatures carries a sobering implication: the smallest marine vertebrates may struggle to keep up with globally rising temperatures. As they vanish, so does their unique contribution to reefs.