Metabolic mutations and bacterial viruses set the pace of evolution of bacteria in the gut.
Nelson Frazão
Postdoctoral Researcher, Instituto Gulbenkian de Ciência
Follow
Like Liked by Evelina Satkevic and 1 other
0

Here, the authors show that a colonizing bacterial strain evolves in the gut by either generating ecotypes or continuously fixing beneficial mutations. They associate the first mode to metabolic mutations and the second to domestication of bacteriophages that are incorporated into the bacterial geno…

Experimental bacterial evolution is a very prolific scientific field, which makes use of a diverse range of experimental setups to uncover the modes of bacterial evolution in nature. The vast majority of bacterial evolution studies are performed in vitro, with the study by Lensky and co-workers, which has now been ongoing for 34 years, standing out.1 However, in 2008 and 2014, two seminal studies using mice opened new avenues to dissect the genetic evolution of a pervasive gut bacterial species, E. coli, during short-term colonization of the mouse intestine. While one of these experimental evolution studies was performed in the absence of microbiota using germ-free animals2, the other was conducted in animals that were continuously treated with antibiotic.3 In neither of these experimental settings was the evolution of E. coli studied in what could be considered a healthy context, as the microbiota was respectively either absent or less diverse due to antibiotic-mediated killing of bacteria.

The pressing question that prompted this study was: How does a bacterium evolve when colonizing the gut of a healthy host in the long term? To address this, we first had to develop a new animal model where bacterial evolution could be followed in a host bearing a diverse intestinal microbiota. The classical model of gut colonization with an invading bacteria implied treating animals continuously with antibiotic. This reduces bacterial diversity, leading to an unbalanced microbiota and hence an unhealthy host. To develop a new experimental setup where we could follow evolution of a commensal E. coli in a healthy gut context, we fed laboratory mice (Mus musculus) transiently (for only 24h) with antibiotic at the beginning of the experiment to break colonization resistance. This allowed following the evolution of an invader bacterium for a month in mice bearing a diverse microbiota, a prime characteristic of healthy hosts.4 Once we got the animal model to work, we were hoping that the E. coli would stably colonize the gut of these mice for a long, long time. Fortunately, it did, with the invading bacteria being able to remain in the mouse gut for up to ~500 days after the initial inoculation.

Our work capitalized on this E. coli mouse model, bringing long-term evolution to the study of E. coli colonization of a healthy mammalian gut. Relying on antibiotic and fluorescent markers, we sampled the invader bacterium on a monthly basis upon mouse gut colonization. By assessing the accumulation of mutations and horizontal gene transfer events, we were able to reconstitute the genetic evolution of an invader bacterium across most of the life time of a healthy host. This allowed concluding about the evolutionary selective pressures acting on E. coli during gut colonization . We were thus able to observe all the evolutionary processes that generate genetic diversity in action: mutation and horizontal gene transfer, either mediated by bacterial viruses or plasmids. Genetic diversity is subsequently either maintained or destroyed by natural selection (see Figure).

Two evolution modes in the mammalian gut. We followed genetic evolution in the long-term of an invader Escherichia coli in healthy mice bearing a diverse microbiota.

We have shed new light on how E. coli evolves when it first colonizes the gut environment, i.e., a new host, for long periods of time. Our work describes two long-term modes of evolution for E. coli — one in which a wide range of different metabolic mutations arise and are maintained, and another dominated by domestication of bacterial viruses. Interestingly, the two modes can take place in the same host across time. In the first, E. coli evolves to form new lineages (with different metabolic capacities) inside the mammalian host (diversifying selection). These sub-lineages are now able to consume different carbon sources in the gut, which may increase the chances that the invader E. coli species thrives in the gut. In the second evolution mode, bacterial viruses are able to integrate into the E. coli genome (directional selection). These viral sequences bring a metabolic advantage,4 together with the huge tradeoff of bacterial lysis, whenever the viral DNA is induced to produce viral particles. Remarkably, we found that E. coli is able to domesticate bacterial viruses by decreasing their induction rate, while keeping the metabolic advantage that these viral elements confer. By investigating the pace at which mutations accumulate in an invader E. coli, we were also able to determine the evolution rate of this bacterium in a healthy gut environment, reporting a clock-like rate of adaptive molecular evolution similar to that observed in the Lensky in vitro experiment.1

*Image and its individual elements were illustrated by Nelson Frazão 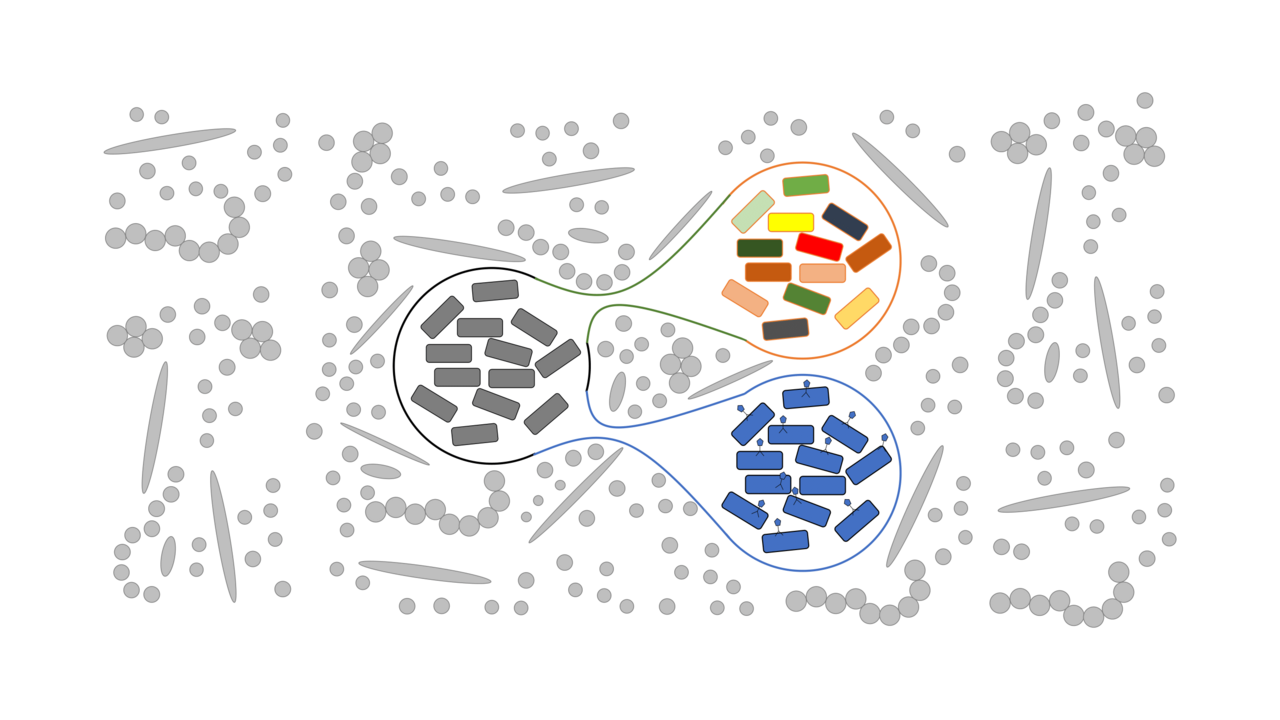 Metabolic mutations and bacterial viruses set the pace of evolution of bacteria in the gut.