Now more than ever, it is important think about not only how our societies influence the emergence and distribution of global pathogens, but also how pathogens have shaped human evolution—or the process of human-pathogen coevolution. For our study, now published in in Nature Communications, we sought to characterize how historic geographic localization of pathogens and human migration patterns influenced the response to pathogens in modern humans. Our model for this was the bacterium Bacillus anthracis, which produces the toxin that induces anthrax disease. The primary host of anthrax disease is not humans, but rather grazing ruminants such as cattle or other herd animals. Humans can be exposed to anthrax bacteria or anthrax toxin when they come into contact with infected ruminants, often in the context of agriculture, hunting or processes of animal pelts.

It is likely that Bacillus pathogens causative for anthrax disease evolved in sub-Saharan Africa, where early humans in Africa were most likely exposed to the pathogen as hunter-gatherer cultures emerged. B. anthracis radiated into Europe and the middle east around 3-6ka, well after human migration out of Africa and around the globe. The timeframe of B. anthracis becoming endemic outside of Africa corresponds closely to the expansion of Neolithic agricultural practices and was likely carried to Europe and the middle east during this process. This was then followed much later by movement of B. anthracis out of Europe alongside colonization and global trade practices. The repeated timeframes of exposure makes anthrax disease a great model for human-pathogen co-evolution because differences in response to anthrax toxin can be correlated with the historic exposure timeline.

Our interest in anthrax disease began when anthrax toxin receptor 2 (ANTXR2) emerged as one of the genes most differentially expressed between humans and non-human primate immune cells in an earlier study (1). ANTXR2 is a receptor present on all cells that allows the toxins produced by B. anthracis to enter cells and cause cell death and misregulation of the immune response. Greater ANTXR2 expression is known to increase sensitivity to anthrax toxins, suggesting that a human loss of ANTXR2 expression could be an adaptive change in response to anthrax exposure. Thus, our work aimed to study how repeated intermittent exposures to anthrax disease drove selection for reduced ANTXR2 gene expression in immune cells.

We found a human-specific decrease of ANTXR2 expression compared to non-human primates in several types of immune cells, including CD4+ T cells. Furthermore, our study showed that expression of ANTXR2 is anti-correlated with cell viability suggesting that non-human primates may be more susceptible to anthrax disease than humans due to the expression of this receptor. We characterized the gene regulatory landscape at the ANTXR2 locus and found a decrease of chromatin contacts along with reduced activity of cis-regulatory elements in humans compared to non-human primates, providing a mechanism for this human-specific decrease in ANTXR2.

In addition to the significant difference between human and non-human primate expression of ANTXR2 in immune cells, we also found a large amount of variability in expression among individual humans and among human organ systems. There is significantly greater expression of ANTXR2 in hunter-gather populations compared to agrarian populations within Africa, consistent with initial adaption to B. anthracis occurring prior to the pathogen’s movement out of Africa (3). Humans with northern and western European ancestry (CEU) display reduced expression of the receptor in tissues important for anthrax pathogenesis compared to the CHB (Chinese ancestry), JPT (Japanese ancestry), and YRI (Yoruba ancestry) populations. This is in line with previous reports (4) that show decreased sensitivity to anthrax toxins in cell lines derived from CEU compared to CHB, JPT, and YRI. We found evidence of both hard and soft selective sweeps around cis-regulatory elements acting on the ANTXR2 gene that also differed in function between humans and non-human primates. This indicated that selection for decreased expression occurred by targeting ANTXR2 regulatory mechanisms. Together, these results suggest that anthrax disease caused multiple rounds of selective pressure on human populations resulting in distinct disease susceptibility among populations based on their ancestral localization.

Many questions remain about this response within the broader scope of historic human migration patterns. The more recent European strain of B. anthracis has become dominant throughout the world, and it would be interesting to see how this has driven evolution in additional human populations. It will be particularly important to tease out how the introduction of European alleles into more isolated populations over the last several hundred years has affected their response to anthrax. Would we see a replicated response as European alleles are introduced to populations along with their cultural practices, mimicking how Neolithic culture spread into Europe thousands of years ago? And what effect would that have on how those individuals respond when they have anthrax disease.

Human-pathogen coevolution has a profound effect on human health. Our research was able to better characterize a small part of how humans evolved in response to anthrax disease and what that means for modern humans. Additional work to understand coevolution may lead to new information for individualized treatments in the future. 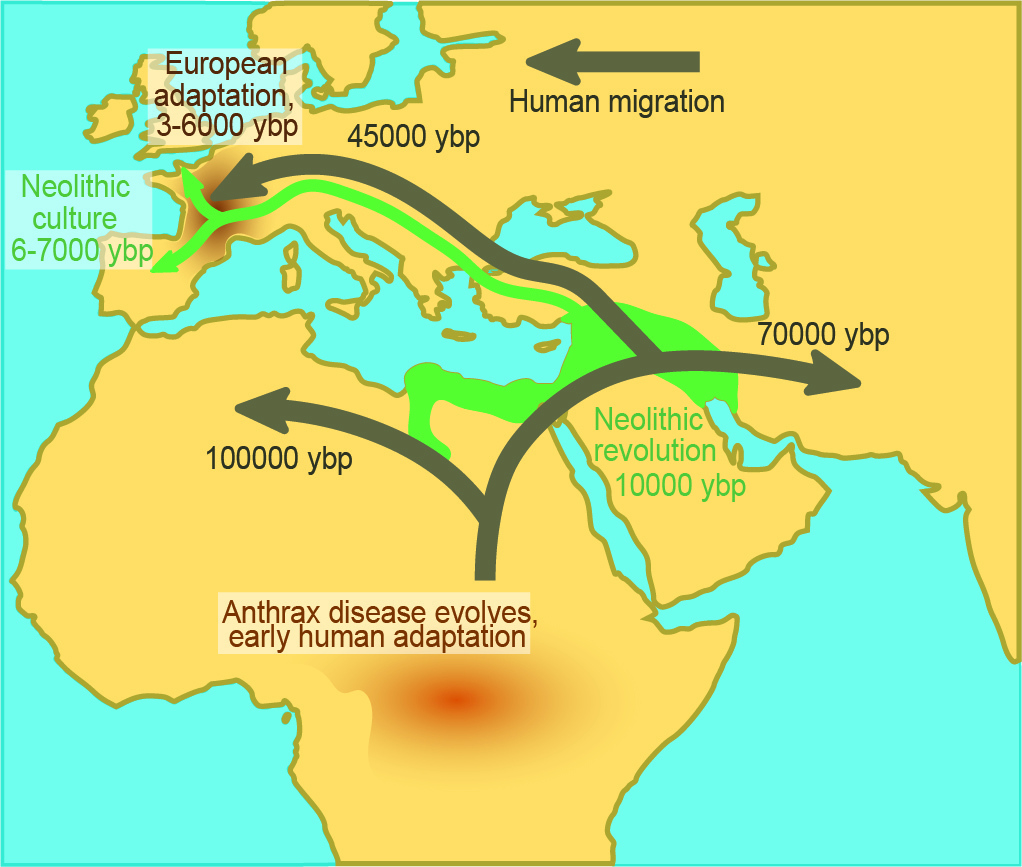 How human migration patterns shaped the response to anthrax disease