As the last ice age came to its frigid end, human began to explore all those landscapes they had to abandon when temperatures were lowest. This was the time of the remarkable cave art in France, of harpoons made of reindeer antler, and of the many variants of stone tools that we associate with this very remote period. As the icy grip of the glacial period began to lessen after around 21,000 years ago, archaeological evidence shows some quite clear signs of culture change and of dispersal. These changes are often thought of as adaptations but, strictly speaking, this has rarely been firmly established: Adaptations are selection-induced changes that lead to a better fit between a population and its environment. We humans, however, also pride ourselves on our ingenuity and innovativeness, so it is also possible that key cultural changes in fact preceded climatic and environmental changes. So, which one is it?
Felix Riede and Alejandro Ordonez
2 contributors
Like Liked by Gao Jianguo and 3 others
0

Here, the authors use climate and resource availability, to statistically model the limiting factors in the dynamics of hunter-gatherer population densities in Europe between 21,000 and 8,000 years ago. They find that limiting factors varied spatiotemporally and the effects of these may be visible i…

By way of serendipity Alejandro Ordonez and I are both associated with a major project led by our shared friend and colleague, Jens-Christian Svenning. His centre by the name of BIOCHANGE (Center for Biodiversity Dynamics in a Changing World: https://bio.au.dk/en/research/research-centres/biochange) is concerned with how nature and human-environment relations will change due to growing human populations, intensifying land-use, and the massive climate change projected to occur in the coming years. The nature of this work requires perspectives from multiple disciplines – and this also includes archaeology. Alejandro is a quantitative macroecologist deeply invested in understanding biodiversity issues, while I spend most of my time thinking about how the long-dead humans of the ice age adapted to the dramatic climatic changes that occurred in their time, these days in the context of my European Research Council-funded project CLIOARCH (Riede et al. 2020; https://cas.au.dk/en/erc-clioarch). Over time, over a bunch of meetings and many a cup of coffee, we began to discover a shared interest in quantifying and hence qualifying these Late Pleistocene population dynamics, and in this way, to better understand patterns and processes of adaptation.

In fact, we wanted to understand whether the changes we see in the archaeological at this time – for instance, the diversification of eyed needles and of pyrotechnology, and later on the development of smoking, fermenting and roasting technologies – were adaptations stimulated by selection or rather exaptations (Larson et al. 2013) or innovations that were flexibly co-opted. As adaptations can only be understood in relation to demography (Metcalf and Pavard 2007), what we needed was a detailed reconstruction of past population dynamics and, in addition, an improved understanding of exactly which selection pressures acted on these populations.

This is where Alejandro came to think of some classic ecological theory – the limiting factor theorem initially formulated by Blackman way back in 1905. The limiting factor theorem is a staple in ecology but has seen little explicit operationalisation in archaeology. The idea is simple: population size would, at any one time, be regulated by the scarcest resource. Conversely, positive deviations from such constraints would indicate an ability – via behaviour or the many marvellous ‘extra-somatic means of adaptation’ (Binford 1962) human culture can offer – to meet and overcome such limits to growth. The logic here is not so different from that of Thomas Malthus or of Charles Darwin in terms of defining adaptations as the product of selection acting on a given population.

In our new study, we combined recently released and highly resolved paleoclimatic data generated as part of Alejandro’s past research with state-of-the-art macroecological modelling to identify the limiting factor dominant at any one location across the transition from the Pleistocene to the Holocene. Like other ecology-inspired studies (see Bliege Bird and Codding 2022 and Hamilton and Tallavaara 2022 for a recent debate on this topic), we coupled ethnographically recorded population densities of recent forager groups to climate data to construct a statistical model for just how these populations relate to a suite of different climate parameters. What is different and novel in our study is how we went about building these models. We did it by fitting Gaussian quantile curves to population densities in the ethnographic database versus one environmental variable at a time so that we afterwards were able to rank their relative importance as limits to population size.

Others before us have shown that temperature and energy availability broadly determine population densities (e.g. Maier et al. 2021; Tallavaara et al. 2010), but nobody had yet looked at which variables act as limits to growth, or how these may vary over time and space. This is a fundamental advantage of our methodological approach. Furthermore, our analysis then allowed us to do two things. First, we could hindcast idealised population dynamics given just how robust our paleoclimatic models have become and given the statistical strength of the relationship between ethnographic forager population densities and climate. Second, we could project these models into space. In our modelling exercise we weren’t just interested in the general relationship between climate and population. Our goal was to identify which climatic variable acted on populations in the most strongly limiting way, something possible thanks to how our models were built - they allow us to capture the temporal and spatial variation in the factor predicting the lowest population density at a given site.

Our population reconstructions align well with other studies that have used related methods (Kavanagh et al. 2018; Tallavaara et al. 2015) and with paleodemographic reconstructions that have used other proxies (Bocquet-Appel et al. 2005; Schmidt et al. 2021). So, no surprises there. What stands out from our analysis is how the primary limiting factors that acted on these communities changed over time and space. Initially, in the Late Pleistocene, it was temperature-related variables that were most constraining and the areas where the same limiting factors were dominant were large. Going into the Holocene, overall energy availability and seasonality became more important and their respective areas smaller. The limiting factor map of the Holocene has much more of a mosaic structure. Does the archaeological record say anything about how people handled these changes?

Landscapes of selection at the end of the last ice age. Plotting limiting factors in space allows us to look at snapshots of how climate acted on human forager groups – and the change from the Late Pleistocene to the Holocene were dramatic and correlate with some equally dramatic changes in technology and culture.

It does! During the Late Pleistocene Effective Temperature limited human settlement and expansion in Europe. Around this time, we see the development of eyed needles and, by inference, of clothing technology. However, it is first some millennia later that people again disperse out of their southern refuge areas. And at that time, we’re seeing not only a much greater number of needles but also a diversification of needle forms indicating a step-change in the manufacture of protective clothing. The needle sizes are now much like what we know from Arctic hunter-gatherers ethnographically. Significantly more complex fireplaces also emerge. In fact, recent and very detailed work on these has shown that these fireplaces really were more like ovens providing prolonged heat with limited fuel requirements (Moseler 2020). They might not look like much when under excavation but these, too, really represent a step-change in pyrotechnological complexity and in time investment. The emergence of these technologies coincided broadly with a change in limiting factors from Effective Temperature to Mean Temperature of the Coldest Month. This suggests a change in selective pressures from needing to stay warmish – with good enough clothing – all the time to absolutely having to stay warm in the winter – with complex clothing and ovens. By the same token, such pyrotechnological facilities as well as needles basically disappear from the the record in the same regions at the transition to the Holocene when our limiting factor analysis suggests the main challenge becomes energy capture – that is, how to extract resources from the environment rather than how to survive critical times of the year. In the Holocene, we see significantly greater investments in a wider array of food-getting tools but also into food storage via smoking, fermenting and roasting. Our analysis also shows that regions with contiguous limiting factors became smaller in the Holocene, which gels pretty well with evidence for reduced mobility and more regionally circumscribed cultural expressions. 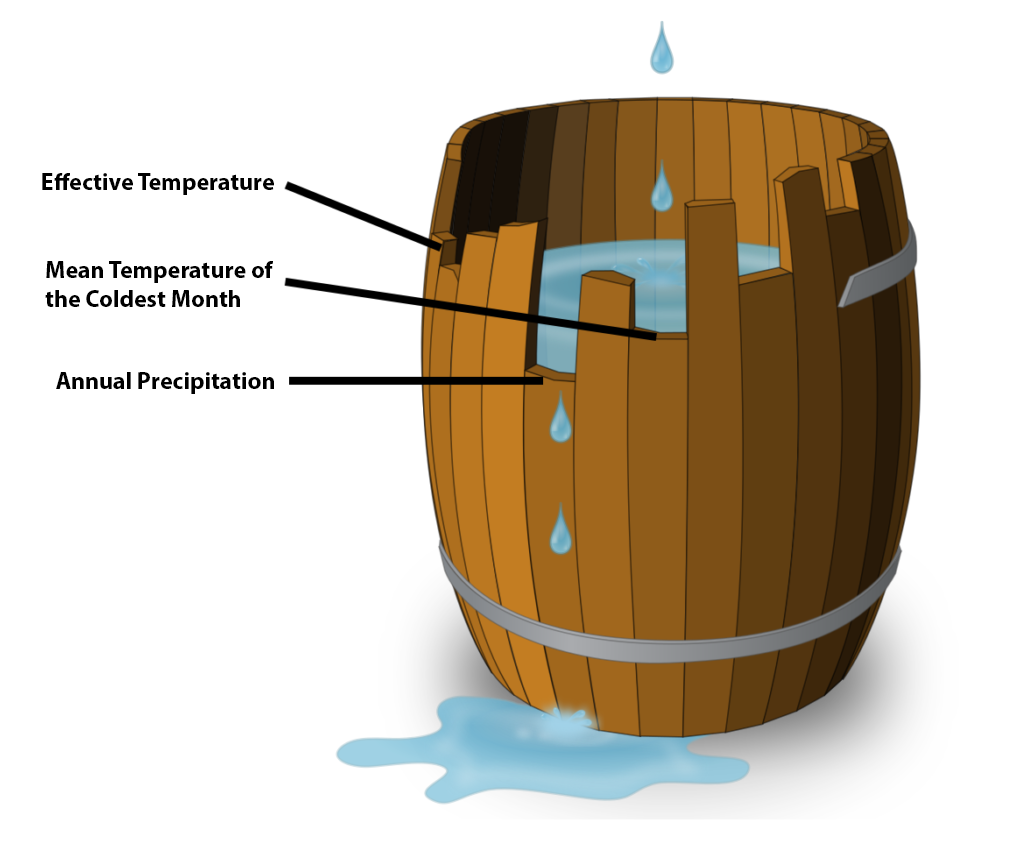 As the last ice age came to its frigid end, human began to explore all those landscapes they had to abandon when temperatures were lowest. This was the time of the remarkable cave art in France, of harpoons made of reindeer antler, and of the many variants of stone tools that we associate with this very remote period. As the icy grip of the glacial period began to lessen after around 21,000 years ago, archaeological evidence shows some quite clear signs of culture change and of dispersal. These changes are often thought of as adaptations but, strictly speaking, this has rarely been firmly established: Adaptations are selection-induced changes that lead to a better fit between a population and its environment. We humans, however, also pride ourselves on our ingenuity and innovativeness, so it is also possible that key cultural changes in fact preceded climatic and environmental changes. So, which one is it?