The ferocity of the 2019-20 bushfires shocked the world. Getting to the bottom of the cause of the gigantic geographic extent and extreme severity of these fires is essential for sustainable forest management.

The recent Australian bushfires shocked the world. Between August 2019 to March 2020 the fires burned from the subtropics to temperate zone, impacting more than 7 Mha of mostly Eucalyptus forests.  These fires broke numerous records and reframed understanding of extreme fire behaviour. For instance, numerous fire driven thunderstorms injected massive quantities of smoke into the stratosphere.  This pollution circled the southern hemisphere altering meteorological process and causing fall out on glaciers in New Zealand and affecting air quality in South America. Smoke at ground level cause extreme air pollution in Australian cities and towns with estimated health costs of around Aus$2 billion, including the loss of around 429 lives. The fires had substantial biodiversity impacts such as burning fire-sensitive vegetation communities like rainforests, and causing mass die-off of wildlife species and degrading wildlife habitat.

This protracted, gigantic natural disaster generated enormous interest in the media globally.  Fire scientists like myself, found themselves filling a role like a sport commentator explaining the unfolding drama to audiences from all around the world in real time. A major element of media ‘story’ was conflicting pronouncements about fire from politicians, environmentalist and scientists about the causes of the fire disaster.

It is the sign of a healthy democracy that Australians were able to publicly debate aspects of the bushfires, such as the role of climate change and the pros and cons of different styles of fire management. Nonetheless, these discussions are charged by the emotion generated by a national crisis and are inevitably entangled with unresolved controversies surrounding climate change policy, fuel reduction burning, Aboriginal rights and indigenous fire usage, forest harvesting, and management of national parks and private lands.

From a scientific vantage point, ideas about the causality and impacts of the fires promoted during the fire crisis must be understood as interesting hypotheses begging to be tested. But scientific scrutiny takes time and resources and so scientists can only deliver peer-reviewed analyses long after the fires have been put out. Because of this time lag, scientists who engage with the media during a bushfire crisis were forced to straddle two competing imperatives: their duty to communicate and share their knowledge and expertise with the community whilst knowing their understanding is imperfect, and the non-negotiable ethical obligation to rigorously and sceptically test hypotheses and conjectures against data analysis and peer review.

A concrete example of this concerns an influential idea that the bushfire disaster was exacerbated by forestry.  There is some evidence, based on landscape analysis of fire severity patterns, that logged areas are more flammable that unlogged forests. This has led to the proposition that a prudent response to this increase in fire risk is to cease native forestry and shift wood production to plantations. It is important to note, however, that there is no scientific consensus about the possible effects of logging on fire risk, despite many media claims to the contrary. The relationship between logging and fire is contingent on fire weather, landscape settings and environment .

The ideas that forestry worsens bushfire severity, and that plantation are a more viable form of wood production, are extremely important to scrutinise for at least three reasons. First, understanding forestry management legacies helps contextualise the role of climate change in driving fire disasters.  Second, if forestry increases fire risk, then this is a good argument against interventions like tree removal and thinning to reduce landscape flammability. Such an idea has been promoted in some other flammable environments like the western USA. Finally, rather than being the solution for wood production, plantations may have less fire resilience that native forests. Pinus and Eucalyptus plantations have sustained some extremely intense fires elsewhere in the world.

Aspects of these questions and concerns were identified by both the NSW Bushfire Inquiry and the Australian Government Bushfire Royal Commission, and for which I provided expert testimony.  These issues motivated me to publish a recent article in Nature Ecology and Evolution.

I liken every scientific project I do to an adventure: key elements include challenging yourself, exploring the unknown, and having a good crew with different skills to help navigate and overcome the inevitable challenges. Accordingly, I assembled a team of collaborators with expertise in forestry (Rod Keenan), fire ecology (Ross Bradstock), geospatial statistics (Grant Williamson) and remote sensing (Rebecca Gibson). All were aware of the complexity and importance of the topic through their engagement with the media, Australian and NSW government inquires, and substantial professional experience in forest and fire management.

Our research was designed to determine the relative role of extrinsic (climate) and intrinsic factors (like forestry) in contribution to the severity of the fires that destroyed or completely scorched forest canopies, and whether plantations have greater vulnerability to canopy scorch than native forests.The reason our research was tractable and could be produced quickly is because landscape ecology techniques enable the comparison of very large areas with different patterns of land use and fire severity. We were able to sample 32% (2.35Mha) of the area burnt in three sample regions spanning the geographic range of the fires.

Our statistical analysis of the drivers of fire severity across the three study sites found that complete canopy scorch or consumption was strongly spatially correlated, mostly likely reflecting large 'fire runs' driven by localised winds. The next most important predictor of canopy damage was extreme weather fire conditions. Logging activity in the last 25 years, in combination or separate to recent landscape fire disturbance, was consistently ranked low in importance as a driver of fire severity.

Our findings were fairly straight forward to interpret. The scale and severity of the fires is best explained by extreme drought and anomalous fire weather conditions. These extrinsic factors completely overwrite the influence of past fires and logging, which have a modest and variable effect.  This makes sense given the extraordinary extreme fire season and the mismatch between the massive area burnt and the comparatively small areas that have supported commercial harvests in the last 25 years (4.5% in eastern Victoria, 5.3% in southern New South Wales (NSW) and 7.8% in northern NSW). We also found plantations were more prone to severe fire, one quarter of the forestry plantations in NSW (the state most affected by the fires) were burnt, and over 70% severely.

Our research is deeply concerning because it signals that there are no quick fixes to the ongoing fire crisis that is afflicting Australia and other flammable landscapes globally.  This crisis is being driven by relentless climate change, which has the terrifying potential to switch forests from critical stores of carbon to volatile carbon sources.  A massive challenge is finding socially and environmentally acceptable means to increase the resilience of forests in the face of relentless global heating to sustainably produce timber products, store carbon, provide water, store carbon and protect biodiversity.

Obviously, we need to move from landscape ecology analysis to real world evaluation of different management options. For instance, one idea worth exploring is whether managers can artificially improve the fire resistance of native forests through altering tree density, vegetation structure, or live and dead fuel loadings. It may well be the case that commercial forestry could be adapted to do this although it will require significant innovation and willingness to let go current tried-and-tested silvicultural practices and forest management approaches by forest managers.  Obviously, modifying forests to increase their resilience in the face of climate change using forestry demands building social licence. This can be achieved through careful evidence-based negotiations amongst stakeholders, despite holding divergent values.

For me, science is a recursive practice of challenging your own (and other scientists') ideas, accepting that data and analysis can lead you to unexpected conclusions and force you to contemplate threats to natural systems and, in response, devise means to counteract them. No single study can solve massive problems, and there can be no single or simple solutions.  Through collective effort, though, I am confident we can achieve sustainable management of forests and fire. Our study is therefore a small step in a much bigger, zig-zagging journey of discovery.

Behind the Mangroves’ roots of cooperation 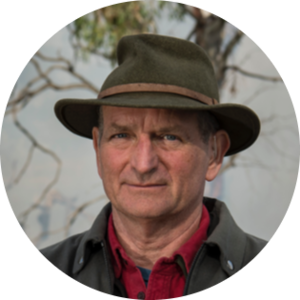 Professor of Pyrogeography and Fire Science, University of Tasmania