Up close and personal: Individual niches of white storks

Do individual white storks have different environmental niches? It might seem obvious to anyone who has spent time with animals that each one has particular food preferences, behavior, or different ways of interacting with its environment. Although the importance of individual variation has been recognized in ecology since the beginning—for example, Darwin based his theory of evolution upon individual variation—it is only in the past 20 years that ecologists have taken a serious look at variation in individual niches. They have found that individual niches—sets of resources that allow an individual to survive and reproduce—are often highly specialized in a population. And furthermore, this variation matters to a host of ecological processes such as population growth rates, competitive outcomes, or ecosystem processes, and thus impacts how we should plan for the conservation of populations.

Given the ubiquity and importance of individual variation, it follows that understanding the impact of global change on animal populations should also depend upon individuality. But to date, it has been difficult to connect knowledge of individual niches to understanding the impacts of global change. This is because studies of global change focus on environmental factors such as climate or landcover, over wide geographic extents. In contrast, studies of individual niches are focused on variation in the use of food resources. These studies have limited sample size and extent because they require painstaking fieldwork such as counting and classifying all organisms found in an animal’s stomach. So, most studies of global change tend to lump all individuals together and simply model species-level mean responses, assuming that variation of individual niches is not important. We wanted to examine the assumption that individual environmental niches are effectively the same, or, alternatively, if specialization in food resources translates to specialization in habitat use. In other words, even though it is well-established that animals have individual niches in their diet choices, do they also exhibit similar variation in their environmental niches? Previously this question would have been difficult to answer, but recent advances in the movement tracking of animals and satellite remote sensing of habitat allow us to significantly expand the scale at which we can examine individual niches, putting the answers within reach. But first we had to tag some storks.

White storks (Ciconia ciconia) make an excellent species to study individual variation in environmental niches. They are generalist predators that use a wide range of open habitats, so there is ample opportunity for individuals to specialize. We can also profit from the long-lasting love affair between Europeans and white storks, which has led to a wealth of information about the ecology and biology of the species. For example, individual storks in the town of Loburg, Germany (one of our study sites) have been named by locals and many even have their own blogs. Catching adult white storks is not easy, a difficult task undertaken by Michael Katz and my co-author, Shay Rotics. White storks are big, wary birds, too suspicious to fall for normal tactics like baits or traps. To catch them, we had to take advantage of a behavior well-known by the local villagers. When farmers mow their hay fields, white storks arrive and walk sedately behind the tractor, pouncing on any delicious snacks springing out of the tractor’s wake. Instead of chasing storks, we let them come to us. Armed with a net gun and an abundance of patience, we sat inside the tractor cabin and captured the birds as they passed nearby. Fitting the GPS transmitter was quick and harmless, and the birds were on their way no worse for wear in a short 20 minutes. Altogether, we fitted trackers on roughly 60 birds in 3 different localities.

After amassing four years of individual movements on the breeding grounds, we examined the configuration of individual stork niches and the stability of this configuration over time. Unlike most studies of individual habitat preferences, which often focus on behavior such as resource selection, we estimated individual niches as geometric shapes in environmental space. This approach meant that we could directly examine the shapes and locations of niches to better understand their configuration. In particular, of the many potential patterns, we were interested in two. Do individual niches tend to have high overlap and similar size, implying they are all the same, as is often assumed with species-level models of habitat selection such as species distribution modeling? Or, do individuals occupy unique regions of niche space, as envisioned by a huge number of studies on individual diet preferences? To our surprise, storks’ environmental niches conformed to neither of these patterns.

White storks used environmental space much differently than envisioned by studies that estimate species-level responses, or by studies of individual diet niches. Niches had a high level of specialization (which occurs when individual’s niche is small relative to the population niche), rejecting the hypothesis that all niches were similar. However, the configuration pattern of environmental niches did not conform to the patterns envisioned by studies of diet niches. Instead of each stork specializing on a certain region of environmental space, individual environmental niches showed a nested pattern. Some storks used a much broader suite of conditions than others, but all storks required the same core set of conditions. Furthermore, the nested pattern was consistent in all three populations and in all four years. A nested configuration may have important ramifications for conservation. For example, conserving a diversity of habitats (as implied by the assumption that individuals use unique parts of the environment) may be less important than identifying and conserving the core environmental conditions required by all individuals.

Taking an individualistic approach to study the impact of global change may improve our ability to predict and mitigate threats to animal populations. However, this study represents only an initial first step, and we hope our approach will inspire others to examine individual environmental niches for additional species. The use of constantly growing, widely available movement and remote sensing data to assess individual niches means this research can easily be applied more broadly, bringing us one step closer to an individual approach to understanding and predicting the effects of global change.

Special thanks to Aurore Maureaud, Diego Ellis-Soto and Shay Rotics who made invaluable contributions to this blog post.

Uncovering the legacy of our Neanderthal ancestors 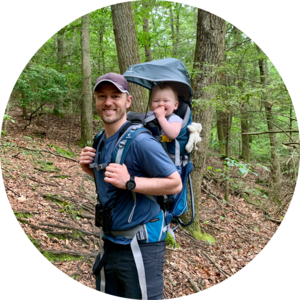