When an endangered species occurs in sympatry across nearly its entire distribution with at least one other congeneric species, and reproductive isolation is incomplete between them, what can be the consequences of widespread hybridization for the endangered species persistence?

Based on evidence from previous studies1,2,3 that our study system – the Podarcis hispanicus complex, a lizard clade comprised of deeply divergent species (about 2.5 to 10 Mya) – shows signs of both recent and historical admixture, one of the main objectives of my PhD was to identify isolation mechanisms and their similarity (or not) across species. To do so, we assessed the degree of reproductive isolation, using SNP data from RAD sequencing and linking genetic data to species traits.

From a conservation point of view, the negative effects of hybridization on the genomic integrity of endangered species raise obvious concerns. However, introgressive hybridization has also been growingly recognized as a potential source of diversity and favourable novel genetic variants. In this study we proposed to compare the strength of reproductive isolation between Podarcis carbonelli and its sympatric congeners to evaluate the relevance of hybridization in a “Podarcis carbonelli context”.

Our results clearly indicated incomplete reproductive isolation and ongoing gene flow between most species, with variable dynamics of hybridization between species pairs, suggesting complex interactions between multiple intrinsic and extrinsic reproductive barriers. Also, interspecific gene flow is not restricted to recent generations and seems ubiquitous, but we found evidences of strong reproductive isolation. These results suggest that hybridization may be part of evolutionary history of Podarcis carbonelli and not a threat to its genomic integrity. However, the indirect effects of hybridization (i.e., waste of reproductive effort in small isolated populations) may still be problematic for the persistence Podarcis carbonelli.

An interesting finding was that Podarcis carbonelli and the closest related species show the strongest reproductive isolation, share the most extensive sympatric distribution and inhabit the exact same microhabitat in the analysed contact zone; meanwhile Podarcis carbonelli and the more distantly related species show the highest levels of introgression, have a very restricted sympatric distribution overlap and present the most obvious segregation at the microhabitat level. This led us suggest that reinforcement may play a central role in enhancing reproductive isolation, not only between the species studied here, but across the entire Podarcis hispanicus complex. This is a question that we will address in the near future.

We think that these findings will add important insights on the potential effects of hybridization and introgression for endangered species, but further evaluation of the genomic consequences of introgression is crucial.

Check out the paper here. 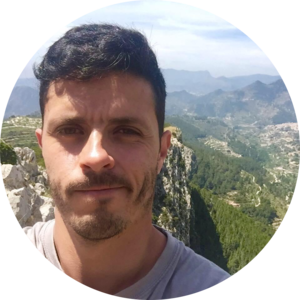