When and how is introgression adaptive? A tale from two widely distributed sympatric oak species

Introgression is one of the most critical sources of genetic variation for adaption under rapidly changing environments. Here, we focused on two sympatric growing oak species (Quercus acutissima and Q.variabilis) to reveal genetic mechanisms of introgression and its contribution to rapid adaptation.
Ruirui Fu
doctoral student, Zhejiang University
Follow
Like Liked by Evelina Satkevic
0

Introgression is an important source of genetic variation. Analysing genomes of two sympatric widespread Asian oak species, the authors find introgression across the genome and signatures of adaptive introgression in regions with suppressed recombination rate.

The genus Quercus, commonly known as oaks, is among the most widespread, adaptable and species-rich tree genera in the northern hemisphere. Oaks usually can live up to a few hundred years and are highly tolerant to various abiotic and biotic threats during the long lifespan (Fig. 1). Meanwhile, extensive gene flow has been found in various Quercus species which may facilitate their spread (Hipp et al.,2019; Li et al.,2021). It makes Quercus ideal material for studying the adaptive introgression.

Fig. 1 The natural forest in Hubei Province with oaks forming mixed stands (left). One of the oldest and largest Q. accutissima trees found in the forest (right). Photographed by  Jun Chen.

Q. acutissima and Q. variabilis are two species commonly found in sympatry in the temperate and subtropical forests of East Asia with the latter favors slightly cooler environment. Both species are usually scattered and mixed in the forests but could sometimes form pure forests as well. In morphology, the two are highly similar except that Q. variabilis adult trees have dense stellate hairs on the lower surfaces of the leaves that make them look gray (Fig. 2).

In this study, we tried to answer the following three key questions by investigating the genomic introgression patterns, recombination rates, environmental associated mutations, and gene expression difference based on multiple sympatric populations.

1. What are the major determinants of introgression?

We found that signals of introgression (fd) at different extents and directions between two species (Fig. 3a). Using the proportion of shared introgressed genomic regions (PSIG), we found populations in similar environment or within short geographic distance tend to have same genomic regions affected by introgression (Fig. 3b and 3c).

Fig. 3 The distributions of genome-wide introgression for two sympatric oak species and its correlation with geographic and environmental distances (a) The f-branch statistic identifies possible gene flow from the branch of the tree on the y-axis to the species or population on the x-axis. Q. acutissima populations are in blue and Q. variabilis populations are in orange. (b, c) The mean proportion of shared introgressed genomic regions (PSIG) between two ‘Q.a – Q.v’ populations are negatively correlated with environmental distance and geographic distance. Shaded areas represent 95% confidence intervals.

2. How are genomic regions of adaptive introgression maintained in the genome?

Furthermore, we found one third of outlier SNPs with allele frequencies correlated to environmental factor gradients were located in the introgressed regions, with especially high enrichment ratios in regions Chr.9:39.4Mb ~ 51Mb, Chr.10:29.7Mb ~ 34.9Mb, Chr.11:24.8Mb ~ 27.4Mb, and Chr.12:13.4Mb ~ 21.5Mb where population recombination rates were found low (Fig.4). Our results confirmed the fact that adaptive introgressed alleles are maintained in the concentrated genetic architectures with fewer, larger, and more tightly linked genomic blocks through recombination rate suppression (Yeaman & Whitlock,2011). We further suggested that the reduced recombination rate may be caused by the chromosome inversions induced by TE proliferation.

Fig. 4 The correlation between genomic introgression, environmental associated mutations and recombination rate. (a) The density distribution of introgression windows with fd significantly larger than zero. (b) All four main introgressed regions in Chr.9~12 are enriched with SNPs with frequency significantly associated with environmental / geographical factors. (c) Distribution of the population recombination rate.

In total, only 3.2% adaptive introgressed alleles were located in protein coding regions while more than 80% were found in transposable elements (TEs) and tandem repeat genes. Almost all these TEs were located in proximal regions of protein coding genes (i.e. within 2Kb of the flanking area of the 5’ or 3’end) or in the introns. These indicated that cis-regulatory regions are most likely the targets of natural selection. We found that 66.7% of those alleles were in known plant cis-regulatory elements and 59.9% of them with regulatory functions affected by environmental stimulus. We also found that genes more likely affected by introgression tend to have more stable expression levels between two species.

In conclusion, genetic drift and natural selection are the two major determinates of introgression between two sympatric species. Same genomic regions are more likely to be affected by introgression if higher environmental similarity is found between species. Adaptive introgressed alleles tend to be maintained in linkage blocks and the way they contribute to adaptation is mainly through cis-regulation of gene expression. 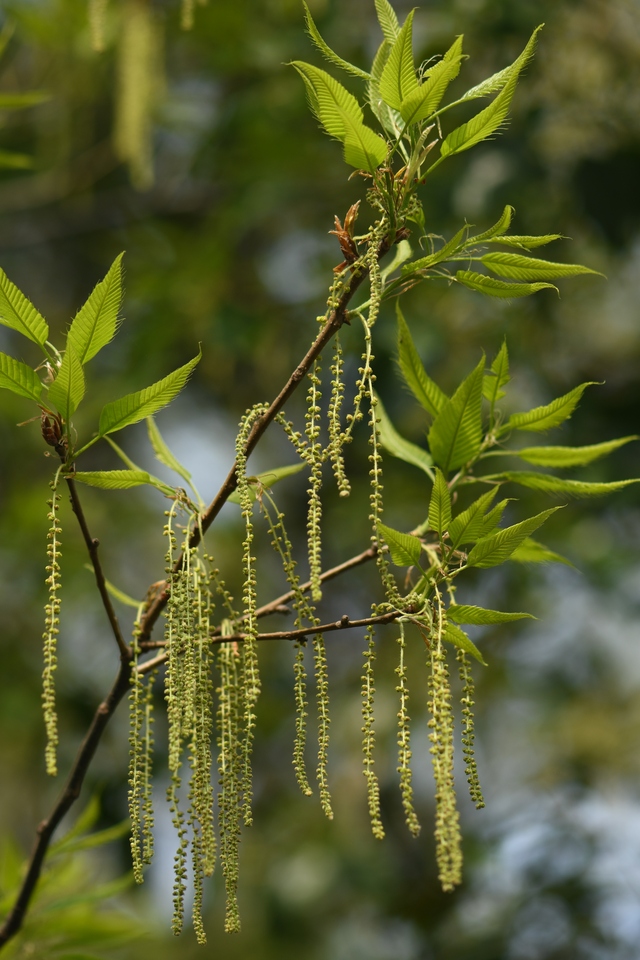 When and how is introgression adaptive? A tale from two widely distributed sympatric oak species

Introgression is one of the most critical sources of genetic variation for adaption under rapidly changing environments. Here, we focused on two sympatric growing oak species (Quercus acutissima and Q.variabilis) to reveal genetic mechanisms of introgression and its contribution to rapid adaptation.