When artefacts reveal some of Nature's secrets

Drosophila melanogaster is an insect model that has been introduced in the labs in the beginning of the XXth century. Easy to breed and today, super easy to genetically modify, I suppose we can say that the fruit flies in the labs have nothing to do with the ones in our kitchen. Some even have legs instead of antennae. Crazy people. So, when we observed that two “wild type” strains behave differently under a complete artificial condition, it was hard for us at first to comprehend what was going on. But we finally did. I think.
Angelique Lamaze
Researcher, WWU
Follow
Like Liked by Evelina Satkevic and 1 other
0

The genus Drosophila originate in subSaharan Africa and spread North up to the polar circle where they experience long days in the summer or even constant light. Here, the authors show that a form of the TIMELESS protein enables flies to synchronise their behavioural activity to long summer days

From bacteria to humans, virtually, all living organisms have an internal clock allowing them to stay in sync with their ecological niche. It is what anchors us to our planet Earth. This link is so evolutionary important that it emerged in different genetic manners amongst the live kingdom (Bacteria, Fungi, plants, metazoans).

By definition, the period of the circadian clock (circa:around diem:day) is about 24h. This period is genetically determined and therefore does not depend on the environment. In constant conditions, such as constant darkness and temperature (DD), organisms maintain their rhythmic behaviour. However, it is the rhythmic changes of the environment that keeps us in sync. The most obvious time giver (Zeitgeber) is therefore light. A lot can happen, but one thing for sure is that our planet keeps turning around itself and around the Sun. However, temperature also oscillates along a 24h day with the amplitude varying with the geographical position but also the latitude. Hence, temperature can also be used as a Zeitgeber and perhaps the concordance of the two (light and temperature) allows the robustness of the circadian system. Synchronisation plays a high importance evolutionary speaking. Indeed, what is the point of being sexually aroused when your friends around are interested in other stuff? You won’t manage to find a partner and make babies if you are the only one interested in that particular activity at a time “t”. The selfish gene theory states that our bodies are modestly hosting our genes and the only purpose of the genes is to spread in order to survive. Hence, in order to spread, the host needs to increase its chances of finding a partner and the best way for this is to be synchronized with each other.

The fruit fly Drosophila melanogaster can be considered as a classical genetic model. This little insect helped us to define the modern genetic (Nobel Prize 1933 T. H. Morgan) and other fundamental evo-devo dogmas such as the essential role of the homeobox genes in early development (Nobel Prize 1995). Importantly for my selfish interest, the fruit fly was the model used to demonstrate that the period is defined by our genes. In 1971, Ronald Konopka described the first three mutants affecting the behavioural period and rhythmicity of the flies. The three mutations were linked to the same gene. He called this gene period (per). One human generation later, the same gene was found to be mutated in a family affected by an advanced sleep phase! I could go on like that for ever so I will finish with this. The last Nobel Prize this model acquired was in 2017 with its use to describe the molecular machinery of the fly clock, which is (obviously!) conserved.

Some animals living on the surface can be entrained to light via both the canonical visual pathway and a circadian-specific blue light pathway. In Drosophila, this pathway requires the photoreceptor CRYPTOCHROME (CRY). How temperature cycles synchronise animals is however largely unknown.

The mechanism of molecular clock resetting by light has previously been demonstrated by our lab and others. When activated by light, CRY interacts with the clock protein TIMELESS (TIM) which in turn interacts with a ubiquitin ligase leading to its degradation. TIM along with its most important partner, PER inhibit the activity of the transcription factor complex CLOCK/CYCLE (CLK/CYC) and by this inhibit their own transcription (figure 1).

There are two natural alleles of tim. The most ancient one, s-tim, enocodes for the original form of the protein S-TIM. The other one appeared very recently in Southern Europe and is the result of the insertion of one nucleotide. This insertion leads to the expression of two isoforms, the original S-TIM and a longer form of the protein, L-TIM. This new allele is expanding rapidly northward despite its young age. Drosophila melanogaster is not a migratory insect, but it likes beer and wine so it follows (or rather is transported by) human movements. However, the frequency increase of this allele has nothing to do with us. Something in this new ecological niche (the North) gives an advantage for the flies bearing the ls-tim allele compared to the ones bearing the old version. If not beer, what can it be?

While I was working on which circadian neuronal circuit was controlling the synchronized behaviour observed under this completely artificial condition: constant light (LL) and temperature cycles 25°C-16°C (LLTC), I noticed some inconsistencies in my behavioural data. In the meantime, Prof. Stanewsky came to me with a manuscript he just submitted using the same environmental condition. However, I also noticed there similar inconstancies that were relayed later by one of the reviewers. After a while, I realized that only ls-tim flies were synchronized in this condition. Importantly, only one copy of this allele was enough to allow synchronization of these flies under such an artificial environment. This was not due to the temperature cycles (TC) as s-tim flies show perfect entrainment in the same TC when kept  in constant darkness (also completely artificial condition from a Nature point of view). Hence, the light was the “problem”. Flies are normally arrhythmic in LL, due to light-activated CRY interacting constantly with TIM. However, CRY does not like so much the new version of TIM and our lab has demonstrated that in vitro, light-activated CRY has a higher affinity to S-TIM than to L-TIM. Hence, it was logic to think that the reason why s-tim flies do not synchronize in LLTC conditions is because of the presence of CRY and the constant degradation of S-TIM. To test this hypothesis, we looked how s-tim;cry0 flies behave under LLTC. And indeed, we “rescued” both synchronization and molecular clock resetting.

Ok, very nice, but what does this have to do with that: the evolution and distribution of ls-tim? Remember, I am talking about natural alleles. ls-tim was not engineered and this LLTC condition was only made to understand synchronization to temperature when the other Zeitgeber (light) is constant. These artificial but controlled environmental conditions are useful to understand how the brain integrates environmental changes. Modifying one environmental parameter at a time allows us to discriminate genetic and neuronal factors that control the locomotor activity rhythm. We had no ecological thoughts behind… at the time…..

So, how come this allele, which otherwise behaves “normally” under other artificial conditions, gives an advantage under this particular environment? Importantly here, how can we link what we see in the lab and the increase of ls-tim frequency we observe when going northward?

That’s where the selfish gene theory comes into play. The reproductive season for the insects is spring/summer. During that time they sexually entertain themselves a lot and make tons of babies which quickly become adults and in turn are actively trying to spread their selfish genes before temperature drops and days are getting short, leading to diapause for the remaining females and a pause in development for the eggs. What happens in spring? Photoperiod increases to a point where organisms even experience “white” nights in the north part of Europe (you can go clubbing with day light and still see around when you leave the club. Unless you’re completely drunk but that’s another story). On the other hand, temperatures maintain a daily oscillation. Oulu, a city in Finland (Mega wink asking for perhaps an invitation to talk about this story there) is one of the cities where Drosophila melanogaster has been caught by researchers and where the frequency of ls-tim was quite high. To test if a Scandinavian summer-like condition would give advantage to ls-tim flies, we mimicked a Oulu summer day in our incubators (Figure 2). And Bam! There it was. All our ls-tim flies were synchronized while the s-tim flies behaved like our clockless mutants. Importantly, the s-tim,cry0 were now also synchronized! Everything fit!

Hence, from what appeared to be incomprehensible under artificial conditions, made total sense from a naturally selfish (gene) point of view.

And now, after the backstage, the front stage, you can access to our open access article here. 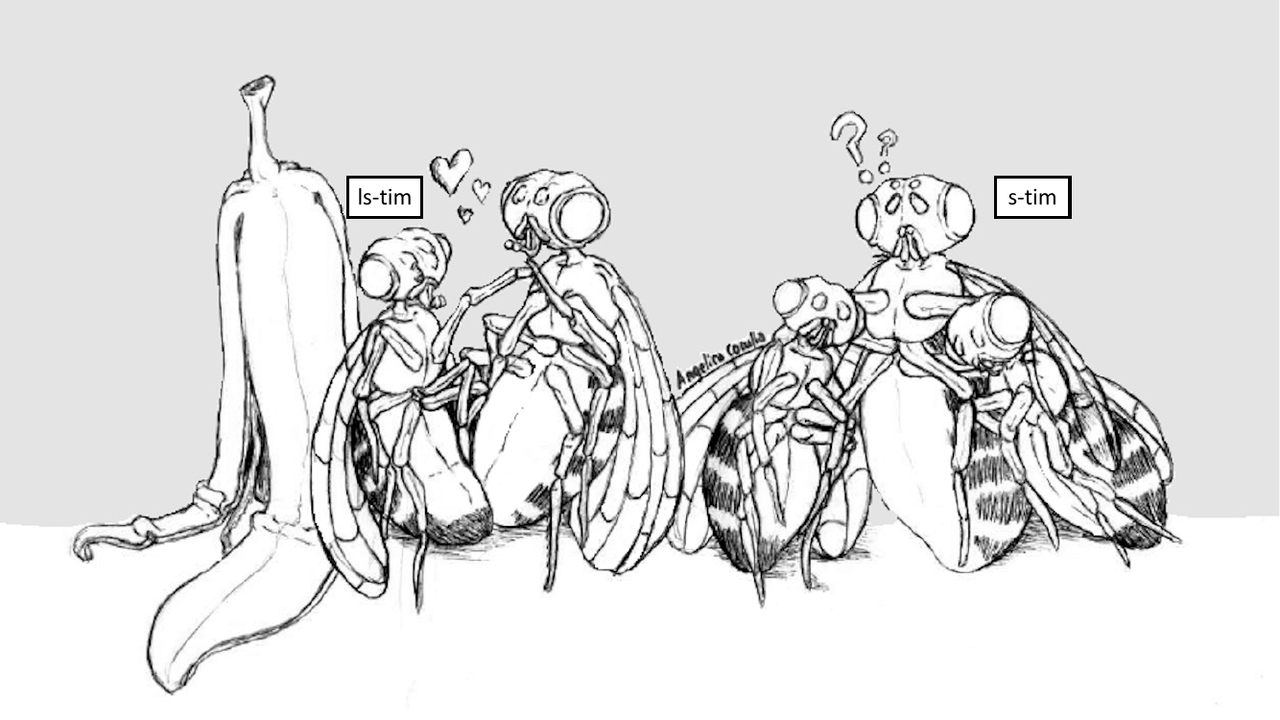 When artefacts reveal some of Nature's secrets

Drosophila melanogaster is an insect model that has been introduced in the labs in the beginning of the XXth century. Easy to breed and today, super easy to genetically modify, I suppose we can say that the fruit flies in the labs have nothing to do with the ones in our kitchen. Some even have legs instead of antennae. Crazy people. So, when we observed that two “wild type” strains behave differently under a complete artificial condition, it was hard for us at first to comprehend what was going on. But we finally did. I think.