Phylogenomics points to either sponges, as is traditional, or comb jellies, the latter altering understanding of complex trait evolution in animals. Our study bridges the gap between two competing phylogenomic approaches, and favours the traditional 'sponges first' scenario of animal evolution.
Anthony K. Redmond and Aoife McLysaght
2 contributors
Like Liked by Paolo
1

The traditional animal tree of life places sponges as our most distant relatives. Sponges are structurally simple animals, and like our non-animal relatives (e.g. Fungi), lack many complex animal traits including a nervous system, muscles, and through-gut. Because of this, the aforementioned complex traits are thought to have emerged only once during animal evolution, after our lineage diverged from that of sponges. This means that our last common animal ancestor shared with sponges also lacked these features, and was likely morphologically simple compared to most modern animals.

Remarkably however, a number of phylogenomic studies over the past decade or so have cast doubt over this long-standing scenario of animal evolutionary history1,2,3,4,5,6. Phylogenomic analyses often place the comb jellies as our most distant animal relatives instead of sponges. But comb jellies are complex predatory animals that possess a nervous system, muscles, and a through-gut, and so these studies have instigated reinterpretation of the evolutionary history of these complex traits. This new placement of comb jellies requires either (i) that the last common ancestor of animals was complex, possessing a nervous system, muscles and through-gut that were later lost in simple animals such as sponges, or (ii) that these complex traits evolved twice during animal evolution, once in comb jellies, and again in ourselves and our relatives that share these features (e.g. sharks, flies, worms, jellyfish). Unsurprisingly, although evolution does not always follow a simple path, the idea that comb jellies could be our most distant animal relatives has led to a heated debate over the evolutionary relationships of animals, centred around the reliability of phylogenomic methods and the implications for evolvability and/or dispensability of complex traits.

I became aware of this debate in 2015, as a second year PhD student at University of Aberdeen, where my studies focused on the shark immune system. From struggling with the rapid and complex evolution of immune genes I had become interested in how to maximise the accuracy of phylogenetic analyses. My attention was piqued then, when two papers came out that year, each claiming to have reduced sources of phylogenomic error affecting animal phylogeny, but coming to opposite conclusions on whether comb jellies or sponges were our most distant relatives4,7.

A major distinction between the studies was the phylogenetic modelling approach applied, which gave opposing results even for the same datasets, a problem which has since generalised beyond these data. In both cases the starting point is a phylogenomic supermatrix, built by concatenating individual orthologous gene alignments for the species of interest together, but how the data are then analysed is distinct. Studies favouring comb jellies as our most distant relatives typically rely on 'partitioning' of the supermatrix such that individual genes are modelled as distinct units (or partitions) or, if it improves model fit, similarly evolving genes may be clustered together and modelled as a single partition. Studies favouring the traditional scenario with sponges occupying this slot in the animal tree of life suggest that this approach does a poor job of combating the famous problem of long-branch attraction in phylogenetics, where fast-evolving lineages are drawn together erroneously. The cause for concern here is that comb jellies are fast-evolving and may be incorrectly recovered as our most distant animal relatives because they are drawn towards fast-evolving unicellular non-animals. Instead, these studies favour the use of 'site-heterogeneous' models, so called for their use of multiple site categories which are usually derived from similarly evolving site patterns from across the supermatrix, regardless of which gene they come from. These site-heterogeneous models are thought to be more realistic because they better account for site-specific biochemical constraints and can help suppress long-branch attraction problems. Although these models preferring the traditional animal tree appear to be theoretically favourable, the debate has continued, with multiple studies since 2015 finding support for each hypothesis and/or questioning each approach5,6,8,9,10,11.

In early 2017 I found myself testing whether site-heterogeneous models could help resolve the evolutionary history of single immune genes. While doing so I realised that it would be interesting to incorporate such models into partitioned phylogenomics, such that each gene or partition would have its own site-heterogeneous model, and test which scenario of animal evolution this would support. With plans of finishing my PhD that year however, I ran a few very preliminary analyses but set the idea aside for when I no longer had an impending PhD submission deadline! I went on then to start a postdoc project with Aoife Mclysaght at TCD, where I am now, focused on whole genome duplication in vertebrates. Somehow from there, the idea of partitioning site-heterogeneous models to examine animal relationships was resurrected and became a major focus of my postdoc.

Overall, the analyses in our study show that partitioned site-heterogeneous models almost always give a better relative statistical fit than the standard models used in partitioned phylogenomics. Better yet, they also seem to help alleviate the long-branch attraction problem in partitioned analyses. Most interestingly to us however, we also saw a shift in support from comb jellies and towards sponges as our most distant animal relatives when using this better-fitting modelling approach. This shift was evident at both the full supermatrix level as well as at the level of individual genes and partitions, and was enhanced by consideration of additional approaches to offset long-branch attraction, such as recoding amino acids into a smaller alphabet based on their physiochemical properties and exchangeability frequencies.

Our strategy bridges the gap between the two disagreeing methodological approaches, and provides very strong evidence that sponges, and not comb jellies, are our most distant animal relatives. This means our last common animal ancestor was morphologically simple, and suggests that repeated evolution and/or loss of complex features like a nervous system is less likely than if comb jellies were our most distant animal relatives.

An unfortunate aspect of computational studies like ours is that there are no exciting photos from field/lab work to share, despite these being a staple across the many interesting blogs on this site. I hope that this photo of Cara, a VIP in the McLysaght lab and the genetics department at TCD, will help make up for this! Cara’s name is Irish for ‘friend’, but of course she is not only our friend, she is also our very close evolutionary relative, and so a very simple drawing of her appears in the figures of our paper as the representative for deuterostomes and bilaterians.

5. Shen, X-X. et al. Contentious relationships in phylogenomic studies can be driven by a handful of genes. Nature Ecology and Evolution 1, 0126 (2017).

a bridge to combine model of partition and site-heterogenous model 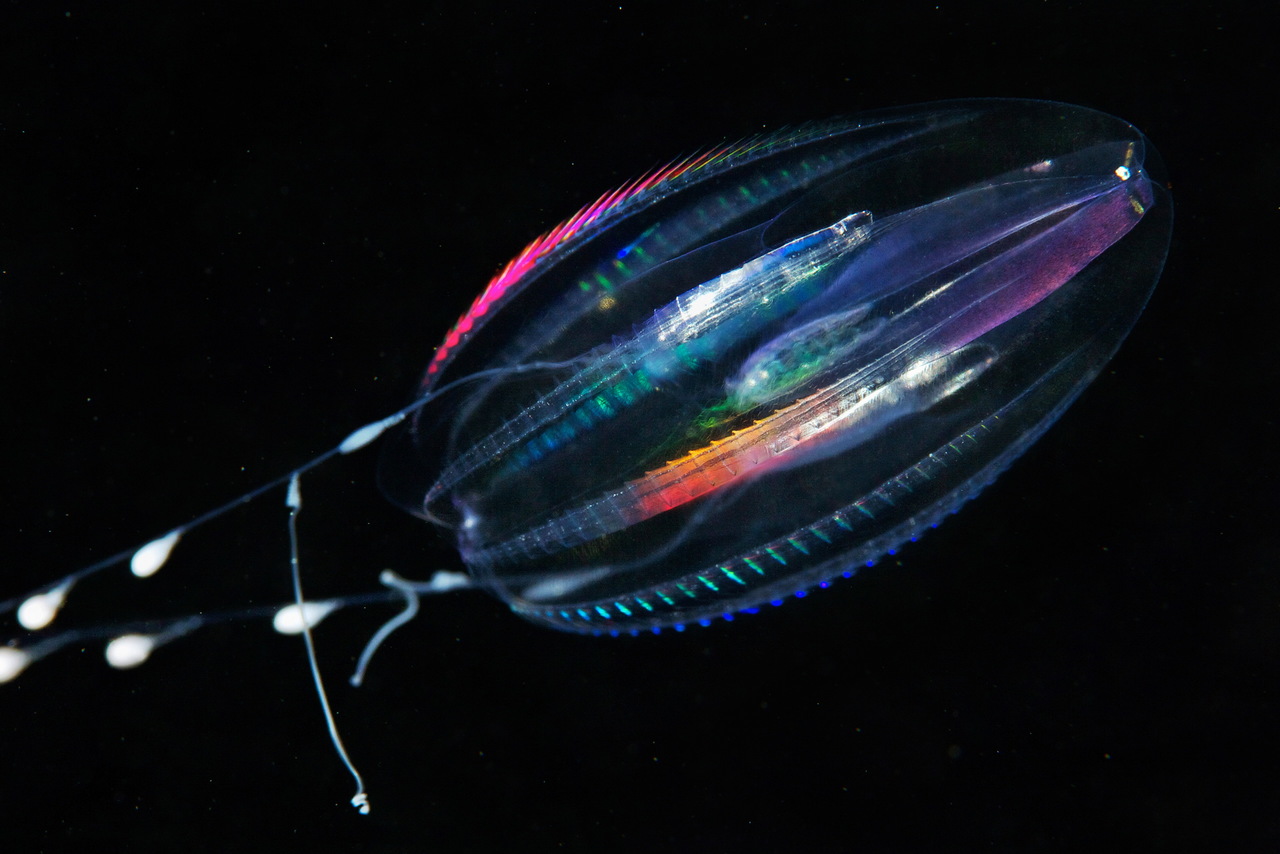 Phylogenomics points to either sponges, as is traditional, or comb jellies, the latter altering understanding of complex trait evolution in animals. Our study bridges the gap between two competing phylogenomic approaches, and favours the traditional 'sponges first' scenario of animal evolution.