Do harmful mutations have a constructive role in evolution?

Deleterious mutations are considered to be irrelevant in adaptive evolution. However, in the laboratory, unicellular yeasts evolve new morphologies, even multicellular ones, in response to gene loss. Hence, gene loss opens new avenues in evolution and is a driving force of morphological innovations.
Zoltán Farkas and Károly Kovács
2 contributors
Like Liked by Gao Jianguo and 1 other
2

The biodiversity of our planet is enormous. According to rough estimates, millions to trillions of different species live on planet Earth. A brief look around reveals massive differences in appearance. Whales, giraffes, humans, mice, and seadragons are easy to distinguish. Even closely related species display variation in specific morphological traits. A typical classroom example is the beak of Darwin’s finches. These birds are similar to each other, however, the form and size of their beak shows large variability and is dependent on the type of food available. This example supports the general assumption that adaptation to new environmental conditions is the major evolutionary source of morphological novelties. Undoubtedly, this applies to many morphological changes in nature, but is this the only possible mechanism?

In our new work (Farkas et al, 2022), we challenge this view and propose that gene loss is an internal driving force in creating new morphologies. This might sound very odd to many readers. It is easier to mess up the normal functioning of a gene than to improve it. Therefore, loss-of-function mutations are prevalent in the genomes of many species, including humans. But losing a molecular function is unlikely to be a good thing. So, how can gene loss be a creative evolutionary force?

Well, luckily for us, and all other species on the planet, such detrimental, loss-of-function mutations do not remain unnoticed by evolution. So-called compensatory mutations in other genes can fix the damage incurred by gene loss (Figure 1). Therefore, one can envisage this process as a co-evolutionary dance between the harmful and the corresponding compensatory mutations. The central issue is whether this process has any enduring effects on morphological traits (Figure 1). We addressed this issue by studying the evolution of baker’s yeast morphology in the laboratory.

We first asked whether deleterious mutations can be compensated by other mutations in the laboratory (Szamecz et al., 2014). For this purpose, baker’s yeast was an excellent choice. It is not only an important species for humans to make delicious bread, beer, and wine, but also a well-studied model organism in biology. Researchers can readily introduce deleterious mutations into its genome and investigate potential compensatory mutations that spontaneously arise. There are also large collections of baker’s yeast strains, each lacking a single gene, created by geneticists. Some of the gene deletions are harmful, causing slow microbial growth, and thereby serving as a perfect starting point for compensatory evolution.

Compensatory evolution in the lab occurred immensely rapidly. In no more than 100 days, over half of the slow-growing mutant yeasts recovered their normal growth in an optimal laboratory condition without any external stress. But do these compensated strains also show normal morphology? Or do they change their look as a side-effect of compensatory evolution? The latter scenario is plausible given the many genes that affect morphology in baker’s yeast.

To investigate this issue, we used hundreds of compensated strains of baker’s yeast that are a thousand times smaller in length than 1 millimeter. To measure the morphological features of such a tiny creature, we needed a highly sophisticated method, involving fluorescent labeling of specific parts of the cell, coupled with automated microscopy that enabled us to investigate hundreds of cells belonging to hundreds of different strains in a high-throughput fashion. As such, we generated thousands of images of single cells, and by using automated image processing, we measured multiple morphological features. Just to give you some examples, we precisely estimated the size and shape of both the cell itself and its most important cell compartment, the nucleus containing the genetic material, the DNA. The non-exhaustive list also includes features such as the position where a newborn daughter cell emerges from its mother cell. The massive amount of data revealed that, indeed, cell shape differs substantially between the compensated strains and the normal, wild-type strain. Strikingly, the type and extent of morphological changes among our strains were similar to those present among natural strains of baker’s yeast.

Even though the organism we study is a unicellular one, that is, it grows mainly as a single cell, some natural yeast strains also show multicellular behavior (Hope and Dunham, 2014). One such example is the so-called invasive growth, whereby the cells form filaments that invade solid surfaces, such as plant or animal tissues. The ability for such invasive growth is especially useful in pathogenic yeasts and has high clinical relevance. Another multicellular form that can appear on solid surfaces is called biofilm, which can attach to various prosthetic devices used in the clinic causing serious medical problems. A third major form of multicellularity concerns the ability of yeast cells to remain attached to each other after cell division and subsequently form aggregates - called clumps - in liquids (Figure 1). This behavior can be also handy for a microbe, as cells within such clumps might be more protected from environmental stresses. It is important to point out that the original, unmutated strain we used, cannot grow invasively or make clumps, and only form a small biofilm. Despite these, it was stunning to see that each of the above multicellular behavior appeared or was enhanced in some of our compensated strains. On top of this, the appearance of the same traits in different strains was caused by mutations in various genes. In the case of invasive growth, the effectiveness of the cells to enter into a surface was comparable to what we saw across natural strains capable of growing invasively. All of these findings suggest that compensatory evolution might also contribute to the emergence of clinically relevant microbial traits.

Finally, we were curious to see how the two types of mutations, the deleterious and the compensatory one, contribute to the new morphology. We looked at two compensated strains, one with an abnormally elongated cell shape and one with a very strong invasive growth. We measured the separate and combined effects of the two types of mutations and found that they are not acting in an independent fashion, but rather in a synergistic way: the combined effect of the mutations was way stronger than the sum of their separate effects.

To sum up, our work addresses some of the most long-standing debates in evolution. Since the early 1920s, Ronald Fisher, one of the founders of population genetics, pioneered the view that phenotypic evolution is by and large a hill-climbing process: it proceeds through progressive accumulation of beneficial mutations. More recently, computational simulations (Covert et al., 2013) suggested that it is possible that deleterious mutations, followed by compensatory evolution can sometimes play a constructive role in evolution. Our work is the first to systematically test this hypothesis and provides empirical evidence that deleterious mutations can frequently contribute to novel phenotypes. A second debate concerns the possible role of large-effect mutations in evolution. According to the dominant view, phenotypic evolution proceeds in small discrete steps, because large-effect mutations often have deleterious side effects. However, our work demonstrates that such deleterious side-effects can be readily alleviated by compensatory evolution while a novel phenotype is being created. Hence, compensatory evolution in the lab can generate “hopeful monsters” (Goldschmidt, 1940), organisms with normal fitness despite having an atypical phenotype. Probably the most exciting open question is whether compensatory evolution really contributes to the morphological diversity seen in nature. By demonstrating that compensatory evolution does have the potential to create new morphologies in the lab, our results can hopefully open an avenue to get closer to the answer. 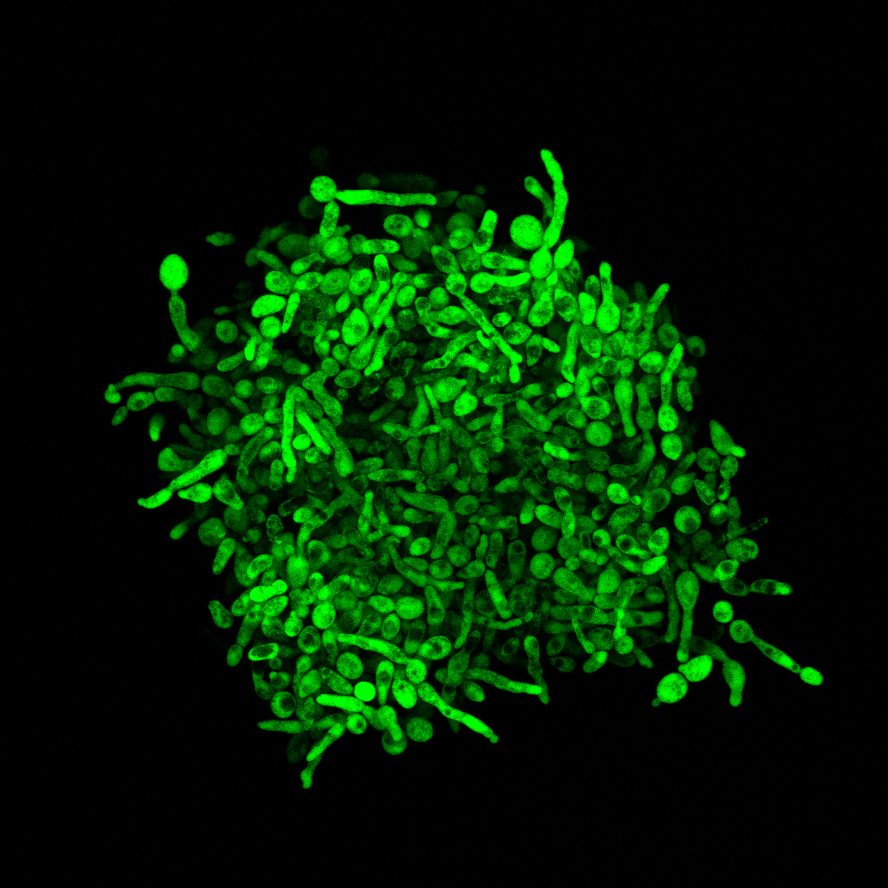 Do harmful mutations have a constructive role in evolution?

Deleterious mutations are considered to be irrelevant in adaptive evolution. However, in the laboratory, unicellular yeasts evolve new morphologies, even multicellular ones, in response to gene loss. Hence, gene loss opens new avenues in evolution and is a driving force of morphological innovations.