Bacteria can have either one (monoderms or Gram-positives) or two (diderms or Gram-negatives) membranes. When, how, and why this major transition occurred is one of the most fundamental and yet unanswered questions in evolutionary biology.
Najwa Taib
Reseracher, Institut Pasteur
Follow
Like Liked by Patrick Goymer

Phylogenomic analysis supports a diderm ancestor of the Firmicutes and points to an early origin of two-membraned cells in Bacteria and the derived nature of the Gram-positive envelope following multiple outer membrane losses.

The bacterial envelope is one of the oldest and most essential cellular components, being involved in key housekeeping functions. It is also a major component involved in host-bacteria interactions, and a major target of antimicrobials. Yet, bacteria show substantial differences in their cell envelope architectures, among which the most dramatic one is the fact of having one membrane or two membranes.

The transition between cell envelopes with one (monoderm) or two membranes (diderm) is one of the major open questions in the evolution of Bacteria. Moreover, the lack of a resolved phylogeny of bacteria with a clear idea about the evolutionary relationships among monoderm and diderm phyla, makes it difficult to infer how and when this transition happened. Fortunately, the evolutionary relationships within a phylum can be resolved, and so if we find a phylum that contains both monoderm and diderm lineages, this would represent a unique opportunity to clarify this issue.

This is indeed the case of the Firmicutes. The Firmicutes are textbook examples of the Gram-positive cell envelope. They comprise notorious pathogens such as Streptococcus and Staphylococcus. However, they surprisingly also include two lineages, the Halanaerobiales and the Negativicutes that have an outer membrane (OM) with lipopolysaccharide (LPS). These two lineages are phylogenetically distinct and each closely related to different monoderm Firmicutes. A previous study of this phylum within our group allowed to put forward the hypothesis that the ancestor of all Firmicutes already had an OM, which was retained in Negativicutes and Halanaerobiales while it was lost multiple times independently during the diversification of this phylum to give rise to the classical Gram-positive cell envelope architecture. Therefore, the transition went from diderms to monoderms, at least in the Firmicutes, representing a striking example of evolution by simplification.

In the frame of this hypothesis, we anticipated that other diderm clades exist in this phylum but have not been yet isolated or sequenced. They might however hide in the vast majority of uncultured bacteria, and could therefore be identified by reconstructing their genomes directly from public available metagenomes. We thought of doing this analysis, which was very heavy, but luckily someone did it first. An Australian group published nearly 8,000 draft-quality genomes recovered from over 1,500 metagenomes. From this dataset, we retrieved the genomes annotated as Firmicutes, and we screened them for the presence of OM markers.

Bingo! In addition to new genomes of Negativicutes and Halanaerobiales, we found 46 genomes from some unclassified Firmicutes, forming a monophyletic and supported clade at the base of the phylogeny of the Firmicutes, and all containing OM markers. The unique representative of this clade was very recently isolated by a Japanese group which called it Limnochorda pilosa. L. pilosa shows a diderm cell envelope, and with our data, strongly suggests the presence of a third diderm lineage in the Firmicutes. The existence of three diderm lineages, provided us an exceptional opportunity to gain further insights into the genes potentially involved in the biogenesis and function of the OM in the Firmicutes. Thereby, combining comparative genomics and phylogenetic analyses we: (i) identified protein families and domains correlated with the diderm phenotype and showed that they mainly cluster together in what we call the OM cluster;  (ii) identified this OM cluster as a distinguishing feature of all diderm Firmicutes that was also present in the common ancestor of Firmicutes; and (iii) showed that the monoderm phenotype is a derived character that arose multiple times independently through OM loss. We could also identify a set of genes that are not specific to diderm Firmicutes at the beginning of - and in - the OM cluster, but are also conserved in monoderm lineages in the same order. This result represented for us the evidence of a vanishing OM cluster.

At this point, we just could not stop at the level of the Firmicutes, even if the project was initially only about this phylum. We wanted to see what is specific to Firmicutes and what is common with other diderm bacteria, we wanted to know the distribution of OM in bacteria, and what is the evolutionary history of OM through this kingdom.

We decided then to push further the analysis and include all bacteria. We were excited to see that the “complete version” of the OM cluster is only present in the Firmicutes while it is scattered in smaller clusters in other diderm bacteria. This observation weakens the horizontal gene transfer hypothesis (HGT) of the OM from other bacteria to the diderm Firmicutes, as no other bacterial phylum possesses any gene cluster similar to the one in diderm Firmicutes. Moreover, with the concatenation of the most conserved OM markers encoded in the OM cluster across bacteria, we generated a phylogenetic tree of bacteria which is in overall agreement with the known taxonomy. In particular, major bacterial phyla were monophyletic and well supported, and the known relationships within bacteria were also retrieved. These results indicate that the OM markers were present in the ancestors of each of these major diderm phyla and have not been subjected to extensive HGT during bacterial diversification.

Unfortunately, in the absence of a rooted bacterial tree, we can’t determine whether the last common ancestor of bacteria (LCBA) was a diderm or a monoderm. Nonetheless, after mapping the presence of OM markers in an updated phylogeny of bacteria, it appeared clearly that the monoderm phenotype is a derived character also in bacteria, as only few phyla (in Terrabacteria) are monoderms, while the majority have an OM with LPS.

Altogether, our results point toward the ancient origin of LPS-OM in bacteria with punctual and independent OM losses in some phyla. The mechanism involved in the loss of the OM in monoderms remains uncler. We believe that the Firmicutes represent the perfect phylum to test experimentally the diderm/monoderm transition. However, exploring and characterizing the cell envelope in all new uncultured taxa would also help at studying this transition in other phyla, and this will need of course a rooted tree of bacteria. 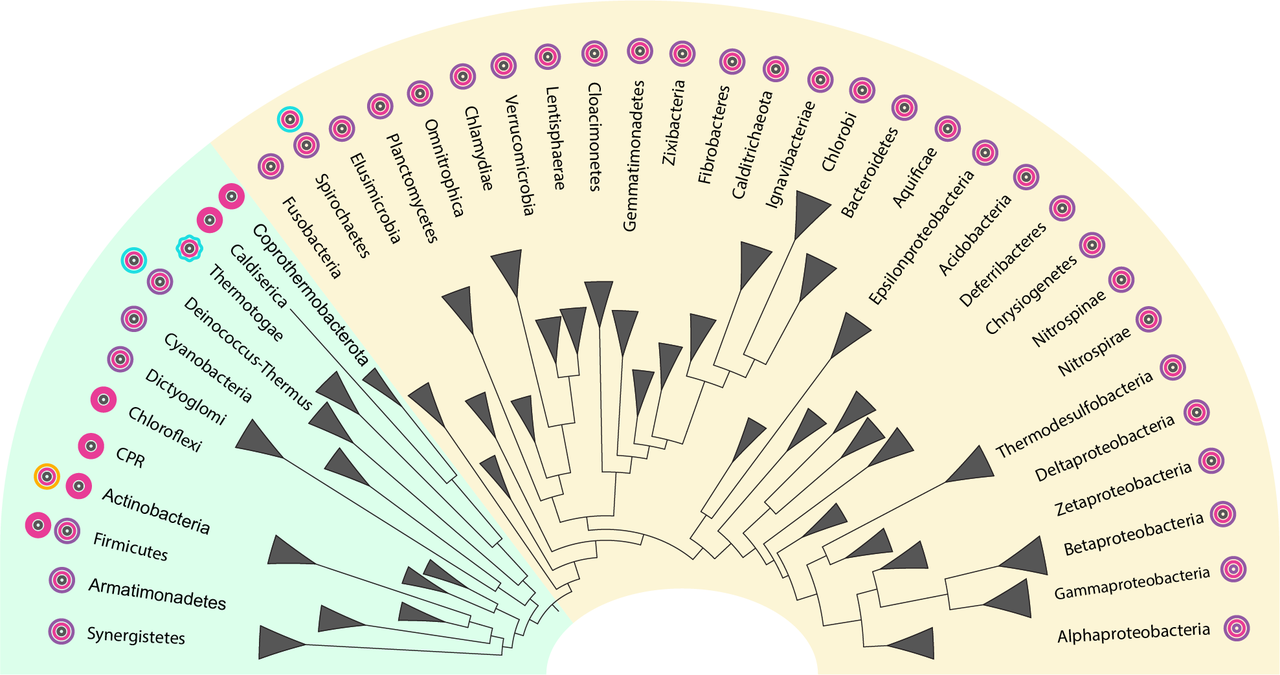 Bacteria can have either one (monoderms or Gram-positives) or two (diderms or Gram-negatives) membranes. When, how, and why this major transition occurred is one of the most fundamental and yet unanswered questions in evolutionary biology.