Why are fungal networks so widespread?

Multicellularity is one of the major transitions in evolution. Here, authors use a model to show that compared to unicellular bacteria, multicellular fungi can more rapidly colonise immobile, nutrient poor resources because exoenzymes provide greater or longer lasting benefits to mycelial organisms.

Comparative genomics indicates that at roughly the same time that land plants and soil first appeared on Earth, some fungi lost the ability to swim, and starting forming multicellular networks. We now find that in terrestrial ecosystems, fungi outweigh animals 20:1, but in the oceans, there is far more fish than fungus. Why did fungi lose their flagella, and form multi-cellular networks instead? And why is it that fungi have evolved the biochemistry needed to digest wood, while unicellular bacteria have not?

On land, where nutrients flow through the environment relatively slowly, the growth of fungal or bacterial colonies is often limited due to the exhaustion of local supplies of some essential nutrient. After all, a cell can only produce a daughter cell if it has access to all of the different ‘ingredients’ that daughter cells require. If you are part of a network that lets you share all the nutrients you acquire, and you release an exoenzyme that converts resource into a supply of reduced carbon, then you can carry on using that carbon supply to fuel growth even after you have completely exhausted the local supply of other essential nutrients. Thus, fungal networks can derive a benefit from parts of the colony that only have access to carbon, precisely because they can acquire the other essential nutrients elsewhere in the colony. In contrast, a single celled organism cannot use a supply of reduced carbon to fuel growth unless it also has a strictly local supply of every essential nutrient. A motile cell can swim to find the nutrients needed for growth, but if it moves away from the carbon supplying exoenzymes that it has already released, it gets less benefit per exoenzyme for the same cost.

In a paper published in Nature Communications, we expand on this line of reasoning, and present a computational model that illuminates the distinctive features of environments that favour hyphal growth, as opposed to the growth of motile or autolytic colonies. The work was inspired after it suddenly dawned on me that fungal networks can ‘get big quick’ by running a biological Ponzi scheme, whereby newly grown regions contribute more than their ‘fair’ share of growth limiting nutrients. For example, imagine a fungal network that doubles in size every day, digesting a substrate that is one hundred parts carb to one part protein. On day one, part of the fungus eats one part protein, one part carb. On day two, that same part of the fungus only eats one part carb, because there is no protein left. On day three it eats one part carb, on day four it eats one part carb, and so on up until day one hundred. In other words, over the course of a hundred days, the given part of the fungal network eats every piece of the locally available resource, namely a hundred parts carb, one part protein. However, that is not the diet of the colony as a whole!

Our computational model suggests that when there is a small, exhaustible local supply of some essential nutrient, and a larger supply of other nutrients, it is evolutionarily adaptive for cells to grow as an interconnected network with a common cytoplasmic pool, especially when the substrate is hard to digest. Fruit, vegetables and growing leaves are relatively nutrient rich, but wood, leaf litter and many other parts of plants are very nutrient poor, which explains why terrestrial plants support so much fungal biomass. It is also worth mentioning that most plants (roughly 80% of species) form some kind of symbiotic association with fungi, in which the plant supplies the fungus with sugars, and the fungus supplies the plant with nutrients it has foraged from the soil. This association between plants and fungi is extremely ancient, and may date back to the very earliest land plants. Our model strongly suggests that fungi were preadapted to forming mycorrhizal associations with plants, because aggressively grabbing growth limiting nutrients with the growing parts of a fungal colony, and sending those nutrients back to share with the rest of the colony (or share with a plant), is the pattern of nutrient flow than makes fungal networks adaptive in the first place. 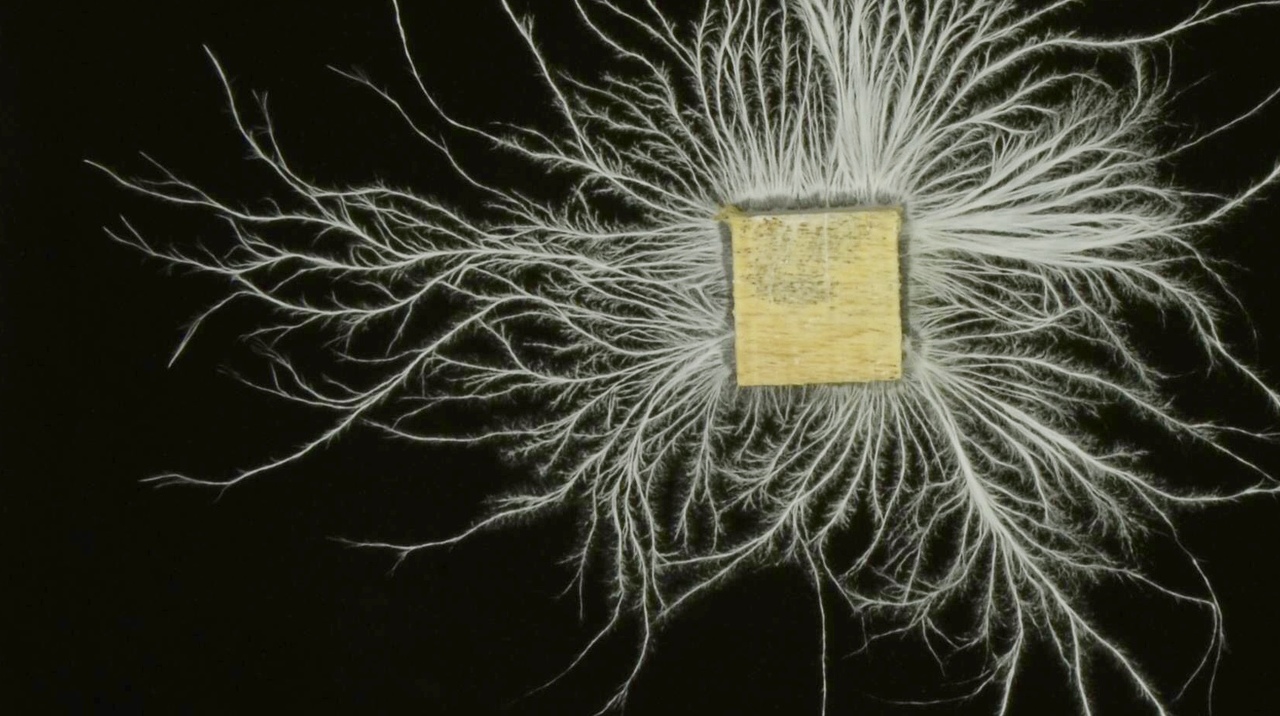 Why are fungal networks so widespread?